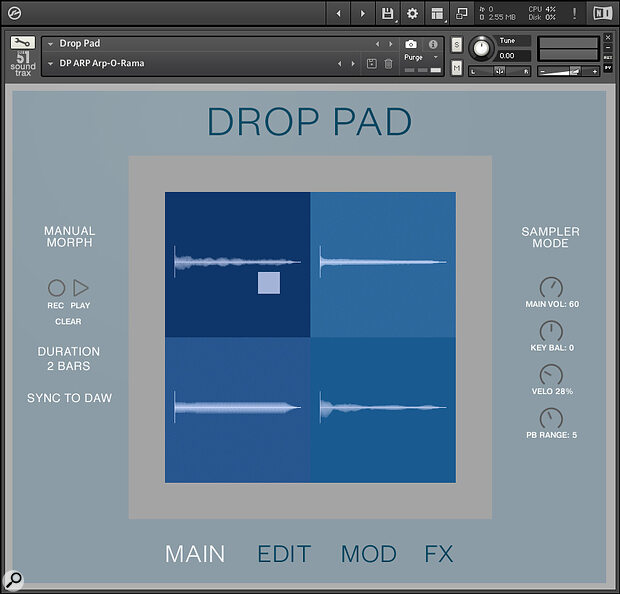 A key feature is the use of modulation to dynamically vary the balance of the four parts and also to add movement to other parameters, such as the filters and effects. This allows for the creation of sounds that constantly evolve, shift or pulse in an organic way. Relevant modulation parameters can be sync’ed to DAW tempo as can rhythm loops, and there’s selected mapping for NI’s Komplete Kontrol.

Mod provides band‑pass, low‑pass and high‑pass filters, each of which may be assigned to any permutation of the four sample pads with functions to modulate the frequency and resonance of each filter. The FX section offers seven effects types and again comes with modulation capabilities, where two sets of effects parameters can be modulated at a time.

The included sound library, though small on drive space, includes many impressive textures and some excellent rhythmic loops that would be worth the price of admission alone. Drag and drop works smoothly and I soon found myself swapping out samples and tweaking the various parameters to create and save new Snapshots. I can confirm that Logic’s EXS‑format samples drag into Drop Pad smoothly along with their loop points.

In summary, Drop Pad enables the user to experiment with some seriously exotic sound-shaping using straightforward controls. The included snapshots show off Drop Pad’s capabilities especially well in the pad, abstract and rhythmic categories, though sounds can be created to fit any genre simply by dropping in suitable samples and then using the modulation facilities to add movement. This is one of those occasions where the end result appears to be rather more than the sum of its parts — and all at a beer money price.