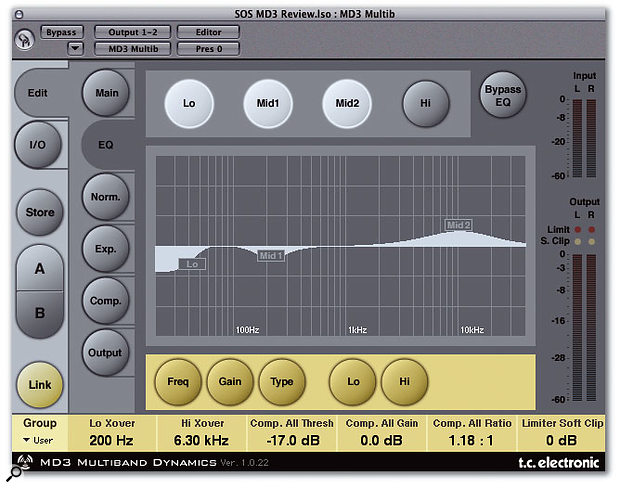 Thanks to the new MD3 package, Powercore users now have access to high-end mastering tools from TC's System 6000 processor.

The MD3 stereo mastering package for TC's Powercore utilises algorithms developed for their high-end System 6000 processor. You could think of it as a kind of high-end Finalizer comprising two parts: MD3 Multiband Dynamics and Brickwall Limiter. It will work on both the PCI and Firewire versions of the Powercore, at up to 96kHz. Mac users must be running OS X to use these plug-ins and Powercore 1.9 or later software must also be installed. MD3 Multiband Dynamics is a demanding algorithm: at up to 48kHz it will run on a single Powercore DSP chip, but at high sample rates it occupies two chips (half the total available on a Powercore Element or Powercore Firewire).

Cut Out The Middle, Man

MD3 Multiband Dynamics looks exactly like its System 6000 counterpart, which is to say that parameter changes are made by scrolling the values shown at the bottom of the pages rather than by on-screen sliders or knobs. Overall the layout is very clear, but because one page looks much like another, you can find yourself doing a double take to find out where you are.

MD3 can be used in mono, stereo or dual-channel modes and offers dynamic processing in three frequency bands. While there are many similarities to the way a Finalizer works, the algorithms used here are somewhat more advanced and would not be out of place in professional mastering applications. By incorporating a side-chain split structure, MD3 can split a stereo signal into its Middle and Side (MS) components and process these separately before converting them back to stereo. The benefit of this approach is that signals panned to the centre of a stereo mix can be processed differently to those panned left and right — a technique employed by many mastering engineers.

Its screen is set out in exactly the same style as the System 6000 display, with separate pages to control its various sections. These sections comprise a four-band parametric equaliser and a three-band expander, compressor and limiter with optional soft-clip functions, plus input and output setting pages. 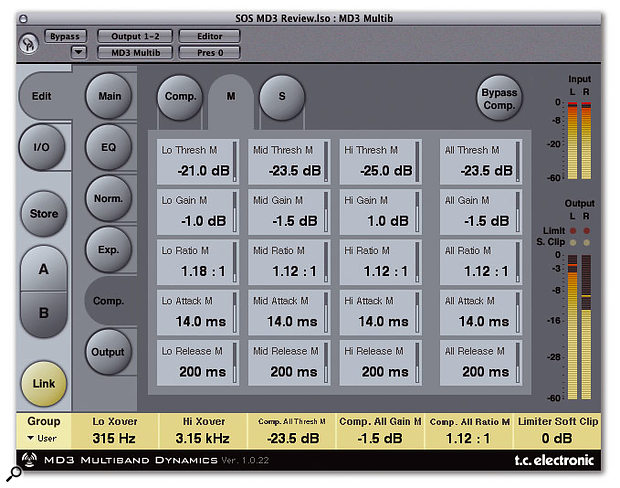 As well as conventional stereo processing, MD3 can split the input signal into Middle and Sides bands.

To maintain the highest resolution, 48-bit processing is used throughout the signal path, and make-up gain may either be applied automatically or manually. An adjustable look-ahead delay may be used to anticipate peaks. The algorithms in both plug-ins can be clipped if they are fed too high an input level, so care must be taken to optimise the input levels prior to processing. Where there is no source adjustment and excessive levels are unavoidable, there's a built-in 'headroom' parameter that you can access from the I/O to gain additional headroom at the expense of a small loss of resolution. This is because digital gain scaling is applied to the input signal, which means you no longer have a full 24 bits of original resolution. The headroom setting doesn't affect parameter settings, such as thresholds, within the plug-in.

The two crossover points for the multi-band processing are user-adjustable in small step sizes from 25Hz to 16kHz, though they may be switched off completely if required. There's also a choice of RMS or peak side-chain sensing, as well as a Crest setting that allows the compressor to respond to peaks that are a user-selectable number of dBs higher than the RMS threshold value. For example, if the Crest parameter is set to 12dB, the compressor will respond both to RMS values and to short peaks 12dB higher than the RMS threshold setting.

Auto Gain, when on, automatically adjusts the gain for each band to allow for its Threshold and Ratio settings, though you can still edit the values it sets for you. Delay sets the look-ahead value in 0.5ms steps up to a maximum of 15ms, and you can also set a reference level, which is the actual signal level at which the compressor will start operating when its threshold is set to 0dB. The compressor features all the usual parameters for each of the three frequency bands, such as threshold, make-up gain, ratio, attack and release, along with full gain-reduction metering.

The EQ is a four-band design with mid sections that can be switched to notch or parametric, and outer bands switchable between parametric, notch, shelving and cut. The notch filters are capable of being set to very deep and narrow values, with width as low as 0.01 octave and up to 96dB of cut, while the shelving filters can be set to 3, 6, 9 or 12 dB/octave. The cut filters are selectable between 12dB/octave Butterworth or Bessel curves and each band covers 20Hz to 20kHz except for the high band, which goes from 20Hz to 40kHz. While the human hearing range is generally held to be up to 20kHz at best, EQ changes above that value can affect the parts of the spectrum we can hear, which is probably why this extended range has been added.

The Output page includes a full-range limiter with soft-clipping algorithm, which should not be confused with the separate and much more sophisticated Brickwall Limiter, and a compare function with its own gain control to allow the processed and unprocessed sounds to be accurately matched in level in order to make meaningful comparisons.

Brickwall Limiter is a separate plug-in, and a much simpler one than MD3 Multiband Dynamics. Limiter plug-ins are 10 a penny, but Brickwall Limiter is rather special. Conventional limiters simply look at the digital data to detect clipping, but even where digital data doesn't reach full scale, it's still possible for the analogue signal reconstructed from that digital data to exceed 0dB. The reason for this is that digital samples are simply points on a graph, and it's possible that two data points either side of a short peak, for example, can represent a peak that exceeds 0dB. While the data may look OK, you might still hear clipping distortion when the data is replayed via consumer CD players, data-reduction codecs and so on. Apparently as little as +0.5 dBFS overshoot can cause audible problems in some consumer equipment, and this can be exaggerated by MP3 conversion and other coding processes.

Brickwall Limiter 's algorithm oversamples the waveform at five times its output rate, and thus can detect if any 0dBFS+ peaks are present in a signal and apply the appropriate amount of gain reduction to prevent clipping distortion from being generated in subsequent playback systems. Unlike normal limiter meters that stop at 0dBFS, the one included here goes right up to +3dBFS to register those inter-sample peaks. Upsampling can be switched off to make the limiter behave more conventionally, but I can't see why you'd want to do this other than to save on processing power. 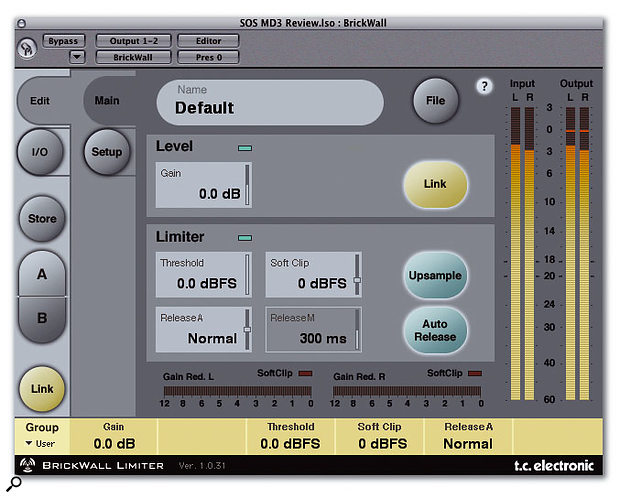 Brickwall Limiter is capable of detecting and flattening out inter-sample peaks in the signal.

This particular limiter algorithms adapts the attack and release time constants to the incoming audio so as to minimise distortion while retaining the ability to react extremely quickly when peak levels are detected. If the Auto Release is turned off a manual release time can be set, but again, I don't know in what type of situation this would be an improvement. A very important benefit of this algorithm is that when limiting is not taking place, the input and output are identical, bit for bit, so the benefits of prior dithering are not lost. A green indicator next to the Threshold control lights up to show that the signal is being passed 'transparently'.

There's also a secondary mode that allows gain changes but maintains 'bit pattern transparency' by shifting the entire signal up or down by one or two bits (which equates to 6dB up and 6 or 12 dB down). Both limiter channels can operated independently or they can be linked, and according to the manual, linking to avoid audible image shifts is necessary only for very heavy limiting.

If I had to sum up the sound of MD3 in one word, it would be 'smooth', especially the EQ. As with many digital EQs, you seem to have to use an awful lot of it to get the right audible results, but it sounds wonderfully clean and vice-free. I'm also a big fan of MS compression as it enables you, in effect, to make changes to the vocal within a mix without affecting the stereo part of the signal to any significant degree. You can also brighten up the side signal to add apparent stereo width without changing the timbre of the vocals or other centre-panned sounds. Analogue mastering engineers have used MS compression for many years so it's good to see it acknowledged in this digital system. The compressor has been designed for transparency rather than to add character, which is again as it should be for mastering, but it's easy to fine-tune the balance between the bands to clean up the mid-range and add sparkle to the top end.

Brickwall Limiter is as simple to set up as any other limiter except that it doesn't allow any peaks to sneak through, and it also warns you of any inter-sample peaks in your source material. You can use it to trim 3 to 6 dB off the peaks in most programme material without compromising the sound, which means you can increase the apparent loudness of a mix by that amount without losing audio quality. This is a wonderfully elegant plug-in with great metering, yet it's so simple almost anyone could use it.

The System 6000 is an extremely serious piece of kit that has found its way into many studios and mastering houses. This plug-in is taken directly from its dynamics package without watering it down or compromising the algorithms, so by adding MD3 to your Powercore system, you have a very professional mastering tool at your disposal. Mastering takes experience, good monitors and good ears, no matter how good the tools you have available, but at least with MD3, you know the tools are up to it. If you are a Powercore user and feel you have the necessary monitoring environment and experienced ears to do the job rather than farm it out to a mastering house, MD3 is a tremendous bargain.

In addition to the usual latency of a Powercore system (typically double the host software's latency, as determined by the chosen buffer size), some elements of these mastering plug-ins add further latency, especially if 'look-ahead' is used. The delay is correctly 'published' to allow software with delay compensation to account for this, but in practical terms, it means it's probably best not to engage the mastering plug-ins until you've finished recording and overdubbing so that increased latency is no longer an issue.

While not exactly cheap, the combination of MD3 Stereo Dynamics and Brickwall Limiter is extremely comprehensive, and brings System 6000 quality to the Powercore user at what is actually a very attractive price for such a professional product.