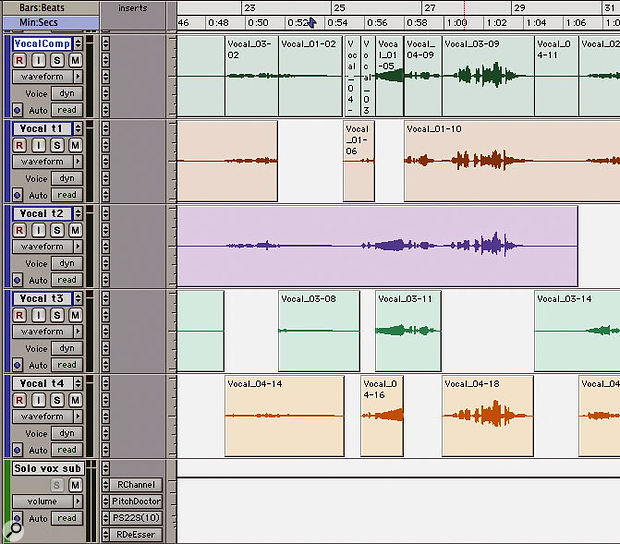 One approach to vocal comping is to have each take on a separate track, with an extra track (top) for the chosen parts. All these tracks are then routed to an Aux track (bottom) with the necessary compression, EQ and so on.

We look at a range of techniques you can try to help you produce a better vocal sound for your project.

In a vocal session you would normally record a number of takes and/or do drop-ins to patch up an otherwise good take. In this month's Pro Tools Notes we are going to look at how we deal with these raw takes to turn them into a polished vocal line.

Vocal compositing or 'comping' for short is usually the first stage in producing a good vocal line. To comp a performance, we take the best elements from the various raw takes and edit them into a master vocal track. There are two basic ways of achieving this.

The first is to use multiple Pro Tools tracks with the same processing applied to each. For this approach, the various takes are laid out in the Edit window with each take on its own track, and an additional track serving as a destination for our chosen parts. All the 'take tracks' and the 'comp track' are then routed via busses to a common Aux track, on which the necessary processing is applied using insert plug-ins. You then listen to each track, one phrase at a time, and compare the various takes. Once you have identified the best take of a phrase, edit and drag it onto your comp track. When you take out these sections, it is best to leave the gaps in the take tracks intact, as they give you a visual indication of which phrase the take came from. There are a number of variations of this technique; some people edit all the tracks into separate phrases and make their selections by muting and unmuting regions.

The other approach is to use Pro Tools 's Playlists feature. This allows you to have multiple takes on a single track, with each take having its own Playlist within the track, and has the advantage that you can do comping without continually having to add new tracks and fill up your Edit window. Before the singer sings the first take, name the track something like 'Vox T1'. When they finish, create a new Playlist on the same track and call it 'Vox T2'. Carry on doing this until you feel everything is covered in there somewhere. Next, create a new Playlist (again on the same track) called 'Vox Comp' and listen to each take, copy the best element from the source Playlist, switch to the Vox Comp Playlist and paste it in. If the Playlists are named sequentially, the region name created in Pro Tools will show you which take it came from.

If you go for the second approach, it is usually easier to create a new Playlist as you record each new take, but it is possible to create a set of Playlists afterwards by spotting each take from the region list into a new Playlist on a Vox Comp track.

Once you have comped your master vocal track, there are other tricks you can apply to improve the vocal sound further. Most of these techniques depend on creating multiple layers and making each of them different from the original. The trick is to make sure the difference is very subtle, or it becomes too obvious that you are listening to multiple versions of the same thing. Here are some ideas to set you going:

An alternative approach is to use multiple Playlists within a single track, which takes up less space in the Edit window and means your processing can be kept on the track itself, rather than an Aux. Pro Tools automatically names the regions to show which take they have come from — in this case, the selected region has been copied from take two (centre) and pasted into the Vocal Comp Playlist (bottom).

The next two tricks are a bit too severe for an exposed lead vocal, but great for fattening out backing vocals...

With all these vocal fattening tricks, make sure you check how it sounds in mono, especially when using an effect which involves time delay, as the mono could sound muddy or phasey. 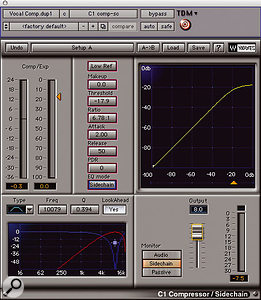 Waves' C1 side-chain compressor, with the appropriate settings for the final vocal brightening trick described in the main text.

I hope these tips will get the creative juices flowing and help you to develop tricks and techniques that are unique to you.