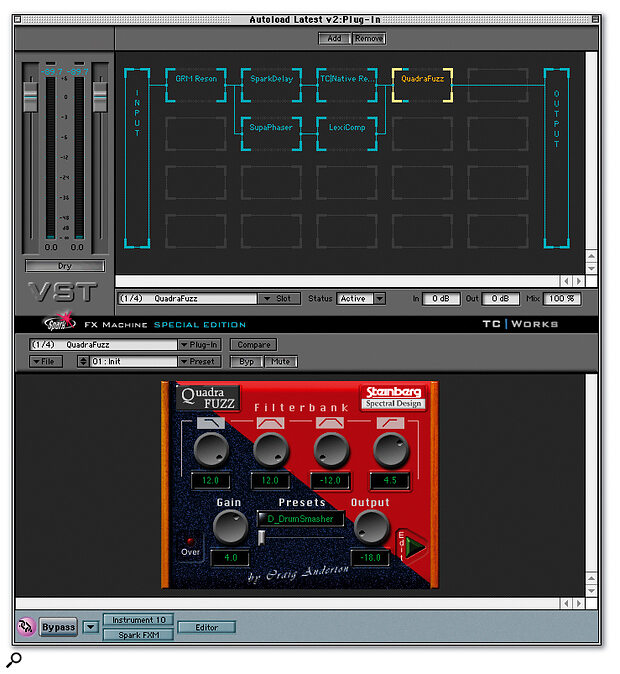 Whilst hardware effects have developed mainly into multi‑effects boxes, most plug‑ins still provide a single dedicated function, such as chorus, reverb or delay. One way to construct VST multi‑effects was introduced with TC's Mac‑only Spark editor (reviewed in SOS March 2000), which includes a matrix within which multiple VST plug‑ins may be connected in an almost unlimited number of ways. Any effect macros created in Spark's FX Machine matrix can be subsequently called up for use within any other VST‑ or MAS‑compatible application as though they were a single plug‑in.

The good news is that you no longer need to buy the full version of Spark or Spark XL to get this functionality, because the FX Machine section of Spark is now available as a separate VST plug‑in in its own right, with a special version for MAS users. It's still only available for the Apple Mac platform (a PC version will be available some time next year), and unlike Spark, which comes with a generous suite of plug‑ins, no additional VST plug‑ins are bundled with Spark FX Machine SE, though the cost is of course substantially lower. One reason Spark FX Machine SE is so inexpensive is that it is currently available only by Internet download from www.tcworks.de (a version complete with bundled plug‑ins, for both Mac and PC, will also be available soon from dealers).

Spark FX Machine SE appears in your VST folder as just another plug‑in. Open its plug‑in window and you'll see a couple of input level faders followed by an empty effects matrix four blocks deep and five blocks wide. This is where you insert VST plug‑ins using the Add button. When a signal is flowing through effects in the matrix, the sides of the matrix boxes function as level meters and a selected plug‑in may be muted or bypassed to help simplify editing. You can also bypass the whole multi‑effects 'macro', and adjust the wet/dry mix setting, input gain, and output gain for each plug‑in slot, even if the plug‑ins themselves don't have a mix parameter.

Routing is intelligently handled so that if you, for example, place four effects side by side, the input is split to feed them all and their outputs are combined directly afterwards. However, if you were to add another effect directly following the four you'd already inserted, the routing would change to add the new effect onto the end of the chain, feeding it from the mix of preceding four plug‑ins. If you want to route around something so as to combine the signal paths later in the matrix, you can insert 'line thru' modules that act as jumper cables. It's all a lot easier to do than it sounds, and allows you to hook up all those weird series/parallel effect combinations that high‑end multi‑effects processors are so good at.

Spark FX Machine SE is very straightforward to use, yet lets you create sophisticated VST plug‑in combinations that would be very difficult or even impossible to achieve by any other means. I experienced no problems either installing or operating it and the only thing I thought was missing was the ability to pan different effect chains as they enter the Output section. This could be done using a simple (possibly freeware) pan plug‑in placed in the matrix at the end of an effects chain.

Overall, Spark FX Machine SE is an effective, well‑thought‑out piece of software, which significantly extends the effects potential of any Mac user's VST plug‑in collection and enables MAS users to get in on the VST act. Using multiple plug‑ins can take plenty of processing power, but if you relish the idea of cooking up your own multi‑effects, Spark FX Machine SE is very attractive and has no obvious Mac alternative.