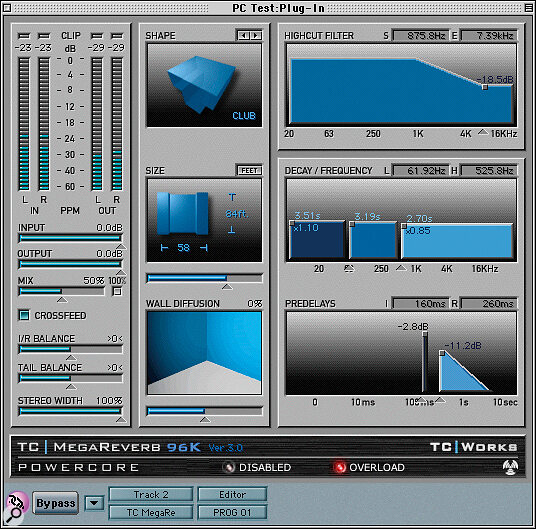 The biggest attraction of PowerCore for most would‑be buyers will be the ability to run up to eight instances of the high‑quality TC MegaVerb reverb plug‑in (top‑left) without loading the host computer's CPU at all.

Paul White turbocharges his Mac in the never‑ending battle to load up bigger and better plug‑ins.

The Steinberg‑conceived VST plug‑in standard is perhaps one of the most significant computer music developments since MIDI itself. However, as VST plug‑ins depend for their processing on the host computer, there will always come a point where the computer throw up its hands and says 'No more!' Current alternatives include high‑power, DSP‑based plug‑ins that run in completely different environments, which provide more power and expandability, but there's a lot to be said for sticking with just one standard environment where you know with a reasonable degree of certainty that all your plug‑ins will run side by side without introducing restrictions or extra complexity. Because of the excellent support for VST within current music software, I believe that for most people VST is the plug‑in environment that makes most sense, although Digidesign's TDM system has advantages for the professional user.

A few months back, we announced that TC Works had developed a DSP card designed to provide a lot of extra power for running plug‑ins within any VST‑ or MAS (MOTU's own plug‑in system)‑compatible Macintosh music program. PowerCore is now available, though currently on the Mac platform only — PC support is planned for the end of the year.

At The Core Of The Apple?

Although it runs within a VST/MAS environment, it must be made clear from the start that it doesn't actually run ordinary VST plug‑ins. PowerCore uses fixed‑point Motorola DSP processing, which requires completely different code from host‑based VST plug‑ins. The big difference between PowerCore and other DSP‑powered systems is that both PowerCore plug‑ins and conventional VST/MAS plug‑ins can be accessed from within the same menus and used within the same environments, making the difference largely transparent to the user. Furthermore, PowerCore has come at a good time, because even though G4 computers are immensely powerful, the wealth of VST effects, processors and instruments available, combined with the demand for higher sample rates, greater bit depths, and inevitably surround capability, means that the available native processing power can get eaten up surprisingly quickly. There's also a trend towards better quality and more powerful plug‑ins, which also places a lot of demands on processor overheads.

It's important to underline the fact that sequencer software manufacturers don't need to do anything to support PowerCore beyond implementing the VST or MAS protocols, because it works in these environments. PowerCore also supports 24‑bit/96kHz and beyond if the host program supports that, albeit by reducing the number of plug‑ins that can be run at once. Furthermore, the effects use 48‑bit double‑precision processing on the DSPs for optimum resolution. It's never easy to define exactly how much extra processing power you get with a card like PowerCore but in terms of plug‑ins, it's claimed to be equivalent to a G4 computer with a clock speed of over 2.8GHz.

The next obvious question to ask is where these specially written plug‑ins are going to come from. Some plug‑in designers have made it clear that they don't think it's worth the effort to totally rewrite their code to run on a DSP platform, while others, who either use DSPs in their hardware already or who write plug‑ins for other DSP‑based systems, have shown more enthusiasm. Of course, TC Works themselves will be providing new PowerCore VST plug‑ins, and as they're already a strong name in the plug‑in world, you can bet that their offerings won't be too shoddy! To date, Antares have announced a PowerCore version of Auto‑Tune due to ship in July and, as expected, TC Works' sister company TC Helicon are pitching in (sorry) with a new plug‑in based on their human voice modelling technology. TC are also in discussion with several other companies and at the Frankfurt Musik Messe, Steinberg announced that they are considering developing products for PowerCore. The Motorola 56K DSP used in PowerCore is standard issue in many high‑end processing applications from Pro Tools to boxes by TC Electronic as well as a number of digital synths, so it should be relatively easy for many developers to offer versions of their products that will run on PowerCore!

Ultimately, it won't matter if not everyone supports PowerCore because, unlike other systems, you can run host‑based VST or MAS plug‑ins at the same time as PowerCore ones, with the advantage that transferring some of the load to PowerCore frees up more processing power on the host computer. To get the ball rolling, TC Works provide a bundle of pretty serious plug‑ins with the card, including a very respectable reverb in the shape of TC Megaverb. As reverb is one of those processes that really drains CPU power, this in itself is a good reason to consider PowerCore.

Also in the bundle are TC Chorus/Delay and TC EQSat, the latter combining five‑band parametric EQ with tube‑saturation emulation. These plug‑ins are based on the TC Tools package previously available only to Digidesign TDM users, and the chorus/delay is actually modelled on the respected TC Electronics 1210 Spatial Expander. TC Works' MasterX is also planned to be available at or shortly after the time the card hits the market, with Voice Tools following on later in the year. Buyers also get a free copy of Spark LE v2.0, a cut‑down version of TC's Spark editing and mastering software. None of the bundled plug‑ins currently offer any surround processing, but TC may develop this in the future. 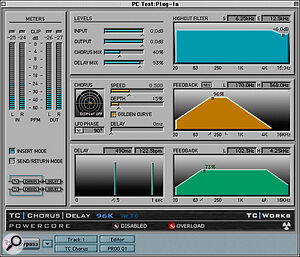 Installing PowerCore drivers from the CD‑ROM is pretty straightforward. The card itself goes into any free full‑length PCI slot and has no I/O or other connectors to complicate matters. Because the bundled software is specially adapted to work only with PowerCore, no copy‑protection schemes are needed. For optional plug‑ins (either from TC Works or third‑party developers), there will be a one‑off challenge and response system that will authorise the plug‑in to run only on one particular PowerCore card.

Once the software has been installed, the PowerCore VST plug‑ins (which reside in your standard VST plug‑in folder) appear and behave like any other VST plug‑ins, but of course they draw their power from the DSP card, not from the computer. Because the card doesn't deal with I/O, it doesn't care what I/O protocol your sequencing software uses. I checked it out using Pro Tools hardware via Direct I/O, an Emagic Audiowerk 8 using its own Logic driver, and the Mac's built‑in I/O via an AV ASIO driver, and once my early beta software was replaced with the production version it worked smoothly with them all. 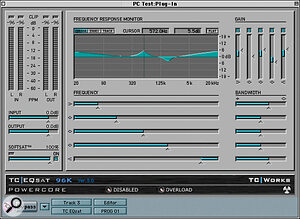 You should always buy a product based on what it offers at the time of purchase rather than what it promises for the future (even when the future looks good!) so the quality of the bundled effects, especially the reverb, is a paramount concern. All three plug‑ins feature a streamlined and intuitive user interface that provides a sensible amount of user control without getting too bogged down in obscure parameters, and a number of the controls elements have strong graphical elements. For example, the reverb depicts room sizes and shapes along with a graph of the reverb early reflection position and the late reverb decay. Separate decay times can be dialled in (or dragged) for three adjustable frequency bands, again with a neat bar‑graph‑style display, while the reverb characteristics can be adjusted by room shape, room size, surface material diffusion and overall high‑frequency absorption.

From the various shaped 'rooms', it's possible to create all the usual plates, rooms, chambers, halls and so on that appear as presets on most hardware reverb boxes, but there doesn't appear to be any provision for setting up gated or reverse effects and there's no means of modulating the delays within the delay matrix (for those Lexicon‑style 'Spin' and 'Wander' effects). Nevertheless, the reverb engine is surprisingly flexible and it's possible to produce some very classy treatments that are smoother and more dense than those achievable using typical native plug‑ins. A range of presets is included to get you started, and designing your own patches is very simple. MegaVerb is also capable of turning in some quite passable room ambiences, which I feel is important in today's production environment. It's hard to be exact about something as subjective as reverb, but I'd say MegaVerb stacks up pretty well against hardware boxes costing around the £500 mark, and PowerCore can run up to eight of them at the same time if need be.

EQSat includes variable tube‑style saturation followed by a five‑band equaliser with fader control and is based on the EQ stage from the TC Finalizer. The tube saturation only comes into effect for loud signal levels and seems to be intended to provide more headroom by applying soft clipping to signal peaks. The equaliser itself, which is configured as a three‑band parametric bounded by two shelving high‑ and low‑pass filters, is smoother and more musical than many digital equalisers I've tried, but you still seem to have to add rather more of it to produce the desired effect than would be the case with analogue EQ. EQSat is the most processor‑efficient of the plug‑ins, and PowerCore will support up to 12 at once (or 16 in mono).

Finally, the Chorus/Delay plug‑in combines delays with a separate chorus/flanger. The delay can be set by time or tempo, and although there's no specific tape emulation facility, the feedback path can be high‑ and low‑pass filtered at any frequency to suit the user. Like TC's hardware units, this effect sounds classy and musical, though I would have liked a multi‑tapped stereo delay facility.

The great thing about PowerCore is that once it's installed, you just forget it and call up the associated plug‑ins just as you would your standard VST (or MAS) plug‑ins. Because the included reverb is rather better than typical native offerings (at least those that leave you any free DSP power to do anything else!), PowerCore is a very practical way of expanding a Mac‑based music studio for around the price of a couple of modest hardware reverb boxes. Perhaps my only gripe is that there really should have been some dynamics plug‑ins included in the bundle because everyone needs compressors. No doubt more plug‑ins will turn up soon, hopefully priced closer to VST prices than TDM, but even as it stands, PowerCore makes a lot of sense.

However, unlike the full version with its expandable effects matrix, the Master section of Spark LE 2.0 can accommodate up to a maximum of four VST or Spark LE plug‑Ins at one time. The provided plug‑ins are a single‑band parametric EQ, MaxIt maximiser, and a Delay Line with tempo matching facility. Third‑party VST plug‑ins may also be used in Spark LE's Master section.

PowerCore offers the best of both the DSP and VST worlds in a conceptually simple package which is compatible with all VST and MAS audio software. Currently, only Mac systems are supported, but PC support is expected at the end of the year.