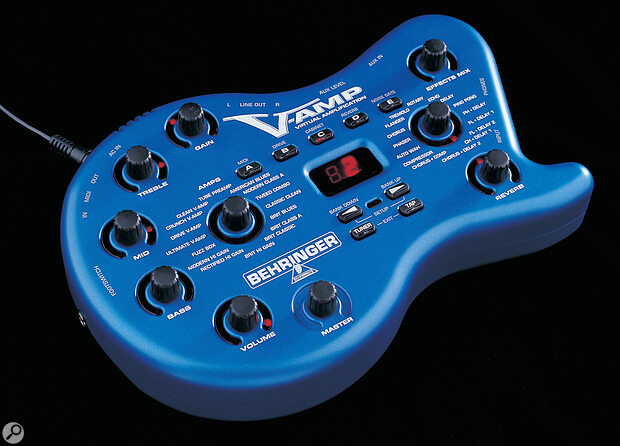 Behringer's V‑Amp is a modelling guitar preamp, complete with speaker simulator, effects and an optional Emagic Sound Diver patch editor. If this sounds in any way familiar, it's because Behringer are clearly after a share of the market niche carved out by the ground‑breaking Line 6 Pod. But although the V‑Amp tips a cheeky nod in the direction of that product, and offers very similar facilities, you'd never mistake one for the other. For a start, the V‑Amp is bright blue rather than red, and instead of the Pod's distinct kidney shape its outline is a caricature of an electric guitar. The construction looks similar, but closer inspection reveals that the V‑Amp is made from tough ABS plastic, rather than from cast metal, and that the knobs are not regular pots but continuous encoders surrounded by rings of LEDs.

The V‑Amp comes packed in a neat padded gig bag, with an AC adaptor and a surprisingly solid dual footswitch. The lead from the footswitch connects to a quarter‑inch jack socket and can then be used for navigating through the internal patches.

The high‑impedance Input socket matches any type of electric guitar pickup, while the stereo line output can be used with balanced or unbalanced connectors. A headphone socket is also provided, and it puts out plenty of level for personal practice. Oversampling 24‑bit converters are used for the guitar input, providing plenty of dynamic range without the user having to mess around with sensitivity controls. The sample rate is 31.25kHz, which equates to an audio bandwidth of around 15kHz. Given that most guitar speakers take a dive above 3kHz, this should be more than adequate.

A rather neat Aux Input, on a stereo quarter‑inch jack with its own thumbwheel level control, allows any stereo line‑level signal to be monitored along with the guitar sound — ideal for jamming along to CDs or drum machines. MIDI In and Out sockets are provided for remote parameter control, patch changing and patch dumping — the special version of Emagic's Sound Diver software, available as an optional extra, uses the MIDI interfacing to allow editing from a computer. However, if you aren't able to use Sound Diver, you can still edit the V‑Amp from your sequencer by referring to the full MIDI implementation chart provided. Alternatively, you could use Behringer's forthcoming heavy‑duty FCB1010 MIDI pedalboard for live control.

The general control layout of the V‑Amp is unarguably Pod‑like, comprising Volume, Bass, Mid, Treble and Gain controls for the preamp section, as well as a Master output level control. A 16‑way rotary switch selects from a range of guitar amplifier types and a second 16‑way rotary switch selects an effect or dual‑effect combination based on delay, modulation (phase, chorus, flange), auto‑wah, rotary speaker and compression. The reverb is separate from the other effects so it can be added to any patch. There are eight different reverb types varying from small room to cavern, with two ambience and two spring settings. When using the V‑Amp for recording, the two outputs allow stereo effects. There are separate controls for the Effects Mix and the amount of Reverb, as well as a Tap button for quick and easy setting of delay times and modulation rates. All the pots, with the exception of the Master output control, show their current value on the LED ring around them.

Five buttons lettered A to E provide direct access to the five patches in the currently active bank. Up/down cursors move through the 25 banks of patches (with the current bank shown in the two‑digit luminous display) and over half the patches come ready primed with sounds contributed by various players and session musicians including the UK's Geoff Whitehorn. These can be modified or replaced by the user and saved to any location, simply by holding down the patch select button for two seconds or more. Factory patches can be restored one at a time or globally.

A reasonable degree of editing is possible via the front‑panel display, including selecting from one of 15 different speaker‑cab emulations to go with the current patch, and choosing between reverb types. Finally, the Tuner button mutes the audio outputs while LEDs under the main numeric display give 'up‑a bit, down‑a‑bit, OK' indications of intonation. The 'A' which the tuning references can be set to various standards between 425Hz and 455Hz, with 440Hz as the default setting. 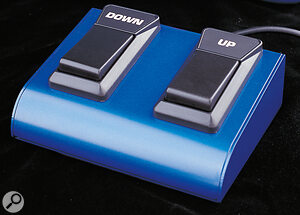 The V‑Amp's selection of main amp sounds is similar to that offered by the Line 6 Pod or the Johnson J Station — the complete listing is given in the 'Modelled Amps & Cabs' box. Extra gain can be added to each patch and a noise gate with user‑variable threshold keeps out the worst of the hash when using the high‑gain settings. If anything, the amp models provide a greater range of overdrive than the originals, particularly with the high‑gain models, so if you want something approaching subtle, you need to keep the gain control in its first quarter — I particularly like the mildly overdriven end of the American Blues amp. Switching the speaker models produces quite dramatic changes in tonality, from the small and boxy practice amp to that big 4 x 12 sound.

The Fender amp models have that characteristic ringy, on‑the‑edge sound and the break‑up tends to be musical and well‑controlled at higher overdrive levels with a reasonably good response to playing dynamics. If you want to do a cover version of Hendrix's 'Little Wing', use this patch with the rotary effect set to very slow and add a dash of reverb — very convincing. I don't know whether the original was done using a Fender or Marshall amp, but that's the combination that works for me in the V‑Amp. The models based on the Boogie and Soldano amps have that distinctive tonal coloration that helps them cut through the mix, and at higher gain levels you're well into hooligan territory!

I feel that the Brit models, which are evidently based on the Marshall sound, are slightly lacking in the heavy‑bass/scooped‑middle tonality that goes with these amps, but the sound is still very playable. By comparison, the Brit Class A sounds rather more musically useful than the Vox amps that I used to own before they became unreasonably fashionable. You know how it feels to drive a car when the power steering has failed? Well I always felt Vox amps played like that unless they were absolutely flat out, and the V‑Amp is more controlled in this respect.

On the whole, the models make a fair stab at emulating the amps they're supposed to. However, I think it's fair to say that the V‑Amp's overdrive presets are a little grittier than the sounds I get from my Pod, whereas the clean tones are actually more lively, in a 'Pod meets Rockman' kind of way. As with the Pod, the V‑Amp has a set of models named after itself, where the designers have combined what they thought were the best elements of several models and then tweaked them until they got something they liked. In short, if there was a Euro standard for guitar sounds, these would come pretty close to it.

The effect combinations are simple and sensible, with maximum delay times of just under two seconds. Though there are no real surprises here, everything delivers the kind of sound and quality you'd expect from a pedal equivalent.

One slight letdown is that the rotary effect is definitely less convincing than that on the Pod. It's musical enough, but to me it sounds more like a Univibe than a Leslie. The auto‑wah function fares rather better and delivers an effortless 'Voodoo Chile' impression — if you have a MIDI pedal this can be used to control the wah‑wah effect using MIDI Continuous Controller 7. Another part of the effects section which works well is the compressor, which seems nicely tailored to guitar sounds, but this can only be used on its own or with chorus — there's no compressor/delay option.

The V‑Amp is designed to be extremely easy to use — just pick an amp type, set the preamp controls, then decide what effects you want to add, and how much. The rings of LEDs around the encoders are a great improvement on the conventional pots found on most other low‑cost guitar preamps of this kind, and as soon as you select a patch you can see exactly what settings were used to create it.

An appropriate speaker cab is loaded in for each amp type, but if you need to change it, it's very simple to do so. The V‑Amp can also be used with a regular guitar amp, though some adjustment of the tone control and speaker simulator settings may be necessary to fine tune the result. Having an Aux Input for playing along with an external source is a nice touch.

Though there's a noise gate to cut out pickup buzz and suchlike, there's still a small but noticeable amount of background hiss when the gate is closed, no doubt due to the output stage. This is something I also noticed with the Pod, though the Johnson J Station seems to be much better than either in this respect.

Behringer have applied their usual strategy of hanging back to see what the other guys do, then trying to improve on it while offering a lower price. The user interface of the V‑Amp is certainly a step up from what we've come to expect on a product of this type, and the sounds, while not uncompromisingly accurate, are responsive and very usable. I particularly liked some of the clean and gently overdriven sounds, though anyone who gets off on chainsaw guitar sounds should also be able to find something to their liking. Finally, the V‑Amp costs less than its competitors in the UK, yet comes with a nice footswitch and a bag, which means that a lot more people will now be able to afford a modelling guitar preamp for recording or rehearsal.

Though Behringer are developing an already familiar theme, the V‑Amp also incorporates some genuine innovations. Given that you get the carry bag and footswitch thrown in, it provides exceptionally good value.