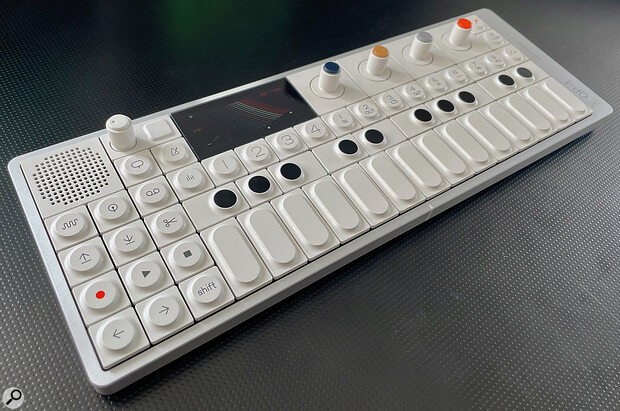 Teenage Engineering’s OP‑1 Field is much more than a sequel.

My obsession with portable music gadgets started the day someone brought a Casio VL‑1 into school. Twenty or so years later I found myself at the 2009 Frankfurt Musikmesse drooling on the sealed plexiglass over the original OP‑1 prototype. I don’t know if the OP in OP‑1 means ‘overpowered’ as in gamer parlance, but it certainly seemed like the money‑no‑object, concept car version of the VL.

The OP‑1 Field is kind of — but not exactly — an OP‑2. Functionally it’s much the same as the original, but just about everything about it has been enhanced and refined. The ‘Field’ moniker identifies it as part of TE’s new range of portable and interconnected devices for working without ties to the studio. This translates to direct USB‑C pairing with the TX‑6 mixer, MIDI hosting, and wireless connectivity.

Like the OP‑1, the Field is a multi‑mode micro workstation. It’s a digital synth with multiple sound engines, a sampler, and a drum machine. It has a sequencer with several (sometimes esoteric) modes. It’s not, however, multi‑timbral in the sense of a groovebox like an MPC, Circuit or the OP‑Z: only one instrument can be active at a time. But what makes it so interesting is a built‑in four‑track digital ‘tape’ recorder where you can capture and overdub performances from the internal sound sources, the built‑in mic, or external inputs.

The OP‑1 was already a beautiful object, but TE have managed to take it up a notch for the Field.

The OP‑1 was already a beautiful object, but TE have managed to take it up a notch for the Field. The unit feels significantly slimmer as the chassis has been shaved around the margins to a narrower aluminium slab, reminding me of the iconic iPhone 4 design. An effect of this is that the OP now looks more sculpted and futuristic than retro.

The encoders have a slimmer shape with fine knurling, and look and feel more grown up than the originals. They have the same indented, endless action but now have a new function: they are push buttons. The colour palette used for the encoders has been muted, and all colour has been removed from the key legending except for the Record and Mic buttons.

Other external upgrades include the high‑res meter strip, the highly satisfying power switch, and the hyper‑functional USB‑C port (more on that later). There are still two quarter‑inch jacks for audio input and output, but these are much upgraded: the converters are much better, the line input is stereo, and there’s a 32‑bit stereo audio pathway throughout. The output also supports headset mics.

The bottom extrusion is now a matte plastic, making for a warmer laptop experience in British heatwave clothing, and there’s a second passive speaker port which helps the reworked built‑in speaker kick out louder and deeper sounds. I love a built‑in speaker for random noodling, so this is really welcome.

The switch away from a metal base plate means the mounting threads have been replaced with a pair of velcro rings. In the box you get two more adhesive rings to mate these with. These are more versatile than bolts, but I’m not sure how confident I’d be with this solution. One of TE’s suggestions is to stick it on to a guitar. Given that the OP‑1 Field is at least twice as valuable as my guitar, I’m not sure I’d risk it.

As it’s come up let’s briefly address the cost, as it’s been a topic of interest in that urbane safe‑space of shared ideas and discussion, the Internet. The OP‑1’s list price is £1999$1999 for which you could, say, buy a really nice polysynth or an MPC Key 61, or heat the average UK semi for one winter (#funnybecauseitstrue).

Some have argued that their pricing reflects an increasingly boutique exclusivity from Teenage Engineering. Now, I’ll grant that a simple leather wrap‑around case for £249$249 is taking the mick, but remember TE also make the Pocket Operators starting at £49$59.

We are used to the majority of modern music tech gear being built to hit a low price point. Most synths and hardware workstations have plastic shells and use the same off‑the‑shelf components. Small desktop synth? 500 quid tops, right? Compare your expectations though to, say, a solidly built Thunderbolt audio interface and £2000‑3000$2000‑3000 or so feels ‘normal’. Custom Fender or Gibson? Twice that.

After booting up, an initial poke around showed that the fundamental OP‑1 navigation and functionality remain the same. The four primary modes are Synth, Drum, Tape and Mixer, selected from the main button row. The 1‑4 buttons below the screen always select between different sub‑views of the current mode, or the track number in Tape mode. The 1‑8 buttons select stored sound slots in the synth and drum modes, or trigger Tape functions.

There’s also a sequencer that can be...