Telefunken Elektroakustic's latest mic is their most affordable large‑diaphragm condenser yet. Is its sound worthy of the Telefunken name? 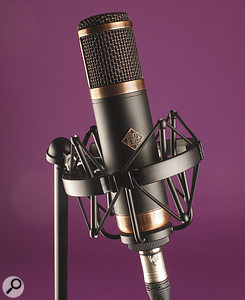 The Telefunken brand is one long associated with the high end of the microphone market. Originating in Germany, the name (for the purposes of professional audio, at least) now rests with Telefunken Elektroakustik in the USA. Though not a budget mic by any means, the CU29 Copperhead is Telefunken Elektroakustik's most affordable studio condenser, and is designed as something of an entry point into high‑end mics.

The Copperhead has a strong lineage. A cardioid‑only microphone, its capsule is a single‑diaphragm version of that used in the AK47 and AR51 microphones, which both employ multiple diaphragms to give the user a range of selectable polar patterns. The tube used is an NOS (New Old Stock) Telefunken EF95/6AK5 model, in a relatively simple preamp circuit that includes a custom output transformer.

The Copperhead's name itself appears to refer to the mic's stylised finish, complete with brushed copper rings at both the top and bottom. It feels nice and solid in the hand, and though I wouldn't want to treat it like an SM57, I found myself confident that it could withstand an accidental tumble to the studio floor without passing on to microphone heaven.

The mic itself comes packaged in a nice wooden case, with the seven‑pin XLR cable, power supply and shockmount elsewhere in the cardboard packaging. Including a shockmount is a nice touch, but it's a bit of a shame that there's no hard case supplied for all the accessories, especially in this price range. As it is, I'd be happier to use a Rycote Universal shockmount, and have a nice case to keep all of the other goodies in!

Setting up the Copperhead is simple, but the seven‑pin XLR that connects the mic to the power supply has slimmer and more fragile pins than the three‑pin equivalent, so you'll need to take a little extra care when plugging in. Before using the mic, I allowed it to warm up for a good hour or so, just to be sure the valve was giving its best.

The tone of the Copperhead is something of a happy hybrid. I tested it with two vocalists (myself and friend Sam Russo, who's often my guinea pig), as well as on a few acoustic guitars and some percussion. I used Sound Skulptor MP573 and API 512C preamps (both in an API Lunchbox) running into a Benchmark ADC1 A‑D converter. I also used the preamps on an M‑Audio ProFire 2626, to see how the Copperhead responded to more affordable amplification.

Since I was recording three songs in two days for a split EP, Sam's dynamic vocals and the tight time limit really helped me to put the mic through its paces. Sam's tone is very mid‑range heavy, and can benefit from both a little extra top end and body, both of which the Copperhead provided in an unobtrusive way. At around an eight‑ to 10‑inch distance I was able to capture both full‑pelt sections and more intimate phrases with a nicely balanced tone.

Recording my own vocals can be problematic. I have a very 'airy' overtone and natural sibilance that can cause havoc with the wrong mic. My falsetto parts especially can become abrasive if paired with a mic that offers a bit too much high‑frequency enhancement, so I was eager to see how the Copperhead would handle these characteristics.

In short, it was great. The breathy overtone of my vocal was represented nicely, but without the raking high‑end edge that some cheaper tube models have imparted in the past. The mic also succeeded in thickening the sound of my voice, which is something I usually have to use EQ for after the recording. Pairing the mic with a 1073 clone and pushing this into saturation seemed an ideal combination for bringing the best out of my vocals.

On such quick sessions, it's always a bonus to have the mic do the work for you, and by the end of the session I realised I hadn't needed to EQ any of the lead vocal parts too heavily. The right tone was just 'there', and I'd only made subtle tweaks for the sake of flavour. Each and every performance sounded very immediate, with a great sense of intimacy.

Compared to the M‑Audio interface's preamps, the other two models revealed the benefits of decent A‑D conversion and preamplification in bringing out the nuances of a quality microphone. The Copperhead didn't disappoint using the interface alone, but recordings certainly sat in the mix more easily when paired with a nice chain. That said, the Copperhead is a microphone that handles both clean and character preamplification with aplomb.

A similarly priced mic I often use is the Neumann TLM193, a medium‑diaphragm condenser with a distinctive treble bite. Despite the fact that the Neumann is transformerless ('TLM' stands for transformerless microphone) and uses solid‑state circuitry, the overall character isn't too dissimilar, and there's something of a Neumann flavour to the Copperhead. This makes sense given the similar centre‑punched capsule design and the long association between the two brands.

That said, they're more cousins than brothers, and side by side I preferred the Telefunken's smooth yet lively tone on both of the vocalists in question, though I'd probably pick the TLM193 out of the locker for an instrument that required a less thick and more forward tone.

The CU29 exhibits a sound that's satisfyingly smooth and has no shocking peaks and troughs, but it's not an all‑purpose mic. What the Copperhead produces best are lovely, three‑dimensional vocals with a smooth but very lively high‑end and comfortable, underpinning bass — just the kind of vocals that sit right in the centre of a recording while everything else flows around them. The Copperhead performs well with acoustic guitar, and does a good job with percussion, too, but it's a vocal mic at heart.

You don't get the kind of ultra‑saturation you'd expect from a vintage tube model, rather a more balanced tone that will work with a greater number of vocalists. You can add a little extra kick to it by using the right preamp, however, if you so desire.

I feel happy to recommend this mic to any dedicated enthusiast or project‑studio owner who records plenty of vocals. It'll give you a distinctive, warm yet sparkling flavour at a realistic price, and it'll help you get a lot of the hard work done at the recording stage.

The Copperhead is a great gateway into a smooth, yet characterful high‑end sound, capturing a shimmering presence and warmth without any thickness or harshness — a claim made in the marketing material of many microphones, but which proves to be true here. The only question left now is: can I bring myself to part with it? Let's just say I'd rather not.

This area of the market is pretty competitive, but if you're looking to buy a large‑diaphragm valve condenser, you might also want to consider the Newmann NR47 (£999), or the Peluso 22 251 ($1293), which is based on a vintage Telefunken design. SE's Gemini range is also worth checking out, as are models from MXL and Rode.

If you've been covetously eyeing a Telefunken mic, you can rejoice that the sound is now available for not much more than $1000. This is not a budget mic by any means, but its pleasing tone makes it very competitive in this price range, and a great choice for any dedicated or well‑heeled enthusiast who records a lot of lead vocals.