Ueberschall's Ambient Lines is another in their series of Elastik‑based sample libraries. 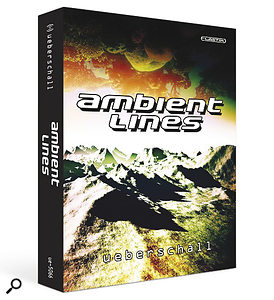 As the title suggests, Ambient Lines provides a range of ambient, soundscape‑style material. The library spans just over 2.5GB of samples organised into 35 construction kits and just over 450 loops in total. The original recording tempos range from 60 to 128 bpm and many of the loops themselves are quite long: 40+ seconds in some cases, and the vast majority over 20 seconds in length. As the core element of many of the kits is some form of pad or texture, the longer‑than‑usual loop format is welcome, as it means that these key elements have time to evolve and change in texture. Most of the pad‑like sounds appear to be synth‑based, and while there are a few that have a harder edge, in the main the sounds are warm and gentle, as befits the 'ambient' tag. Alongside the beds themselves are plenty of complementary textures, the occasional tinkling bell or piano sound (although the playing is quite abstract — there is nothing here that really approaches the status of a melody) and some subtle percussion loops. While some of the construction kits have been given a suitable name that hints of the intended mood (for example, 'Daylight', 'Dreamtime' or 'Drifting') others are less obvious. However, my favourite was 'Silence', which, thankfully, was not, or I expect purchasers might have been asking for a portion of their money back!

The blurb of the packaging uses the phrase 'background music' as part of the description of the material and, while that might have negative connotations to some readers, in this case I think it is both an accurate description and a positive thing. These are not kits for songwriters but are targeted fair and square at media composers. For TV, film, adverts, games, advertising and documentaries, this type of 'background music' is often exactly what is required: subtle, unobtrusive and inoffensive, but not unattractive. For those readers who watch the BBC, think about some of the cues used underneath the short transition visuals between programmes. Someone has to write (and get paid for!) those cues, and Ambient Lines would be just the ticket if that is your musical field. There are, of course, lots of alternative 'bed and atmosphere' sample libraries available and I don't think this offering from Ueberschall is venturing into any really novel territory, but it does provide good working material for the budding media composer. John Walden

What Do Mastering Engineers Actually Do?
3 days 6 hours ago.