Brainchild of British amp designer Roy Trotter, the TellyTone TV405 is a medium-power valve amplifier that has been designed for studio use. Everything is hand-built, from the very solid veneered HDF casework to the circuitry. 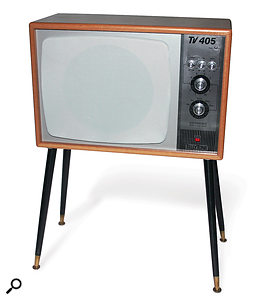 The most obvious departure from tradition is that it has been designed to resemble a 1960s TV set — you can even get optional retro screw-on legs! — but its insides are as unconventional as the exterior. Once you get past the familiar 12-inch Celestion G12 speaker and military-grade circuit boards, the valve line-up bears little resemblance to the familiar amps we all know and love. To provide a short signal path, there's only one dual-triode preamp valve before the phase splitter. The design is based around a two-plus-two push-pull output stage, and Roy has chosen to use a long-life version of the EST15 TV power valve, made by the Oldham-based M-O valve company. (Apparently, he has thousands of NOS versions of these stashed away.)

Even the valve heaters are a little non-standard: there are different voltages for each valve set, and the preamp heaters are rectified and smoothed, whilst the power valves are fed directly from the fully isolated split mains transformer's secondary heater windings. Roy also uses a solid-state HT (high voltage) rectifier so you don't get that compressor-like sag when playing hard.

A customised Repanco 1947 Ohm-a-cone electrostatic output transformer couples the quartet of EST15s to the speaker, giving an RMS power rating of 28W. The usual tone stack has been dropped in favour of a couple of fairly limited-range high and low controls. These offer a useful degree of variation around the amp's sweet spot. Brightness is essentially a treble control, but at its extreme it also lowers the bass just a touch. Contrast, on the other hand, provides both bass lift and cut. Colour is a drive control, and is followed in the signal path by another, which governs the master volume. The large five-way rotary switch at the bottom of the control panel provides varying degrees of gentle low cut.

While there are absolutely no frills here (there's no reverb and no FX loop, for example), a number of international 'names' in the guitar world have already taken delivery of TV405s — and not just because they blend in with the lounge furniture. Perhaps the appeal is its honest basic sound, and that it 'plays nicely' in combination with pedals: it's almost like having a very grown up version of that valve practice amp you wish you'd never sold back in the '70s. Its own overdrive can sound suitably smokey and never gets excessive, though it may initially have too much of a gritty 'bark' for some when used with hot bridge pickups. However, you can get a smoother overdrive by dialling in more bass, and less top, then using the rotary bass-cut switch to tame the lows. Those controls may seem to have a limited range, but by juggling their settings you can actually make a big difference to the sound. So... yes, it's crazy to the point of being stark raving bonkers, but it sounds good, and there's something very endearingly British about the TV405. Paul White