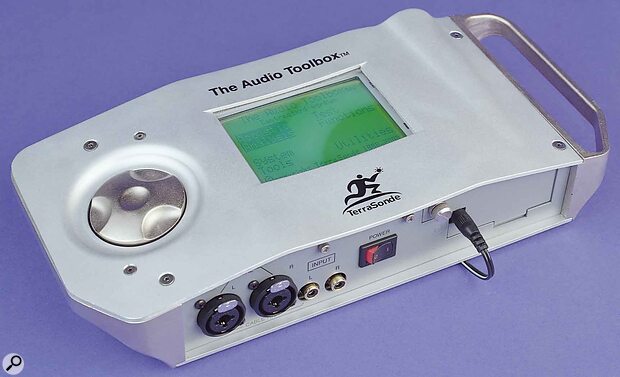 Terrasonde have given their audio test set even more test functions and a rugged new casing.

I reviewed the original Audio Toolbox in SOS February 2000, and was so impressed with this versatile and comprehensive little machine that I bought the review model. Since then it has never been far from my reach, as I use it almost daily to test and check the specifications of all manner of equipment under review, as well as for the routine alignment of all of my own recording equipment.

The original Toolbox had a, shall we say, distinctive appearance which did not necessarily convey its very serious and professional capabilities. Terrasonde have addressed this with the new Audio Toolbox Plus, which is a far more rugged version in a substantial anodised aluminium and steel case, aimed at applications where the 'Game‑Boy' styling and plastic construction of the original would be inappropriate. Those who enjoy the quirky design will be happy to know that the original version is still in production and over 2000 of them have been sold to date.

The side panel above the LCD display carries a selection of audio and MIDI test connections.

Everything about the Plus model is much larger and it looks far more rugged. The unit measures 300 x 150 x 50mm and weighs 1.8kg, with its new sealed lead‑acid rechargeable battery installed and the measurement mic attached. The fact that the measurement mic is now detachable — it is connected to a BNC connector, either directly or via a supplied extension cable — is another important difference. To make the Audio Toolbox Plus easier to carry around, a chunky handle has been incorporated at the right‑hand end, and the side connection panels have been recessed for protection — although not by quite enough! Sadly, the microphone BNC connector, the battery cover screw, and the release buttons of both input XLRs remain slightly proud.

The LCD screen is a good 20mm bigger in both dimensions than that of the standard Toolbox, and is far clearer to read, partly thanks to a contrast control added to the side panel. The cast‑aluminium control wheel is also about 5mm broader in diameter than the original, with a less elaborate moulding, and is recessed nicely into the front plate. A new rechargeable sealed lead‑acid battery pack is stored internally, and its coaxial power/recharge socket is permanently accessible on the outside of the case. This new battery system (also available to fit to the bottom of the standard model) contains an integral charging system which operates whenever the power lead is connected. A spare battery pack can therefore be charged simply by plugging in the power unit, while the Toolbox runs off it's internal battery.

The Toolbox Plus is supplied in a sturdy ABS carrying case with cutouts in its foam liner for its included accessories: the wall‑wart power supply, measurement microphone (with stand clip and extension cable) and PC/Mac interface serial cables. There is also space for an optional spare battery.

The latest software, version 2.6, is now available in two forms. As the Toolbox Plus has been designed very much with audio contractors in mind, it is pre‑loaded with the Contractor software (available to standard Toolbox users as an optional extra), which replaces some of the music‑oriented facilities of the Standard version with more specialised functions, as well as adding substantially to the capabilities of the existing tools. Part of the repackaging has meant that several functions have also been relocated into alternative submenus, which can be slightly confusing if you're already familiar with the Standard software.

Function enhancements in the Contractor version of the software include things like extra octave and third‑octave band filtering, several additional weighting curves, and more measurement options — there is detailed information about all of these on the Terrasonde web site. The new tools include a Noise Criteria facility and a Sound Study Graph (both under the Acoustic Analysis menu). The Polarity Tester and Sample Scope functions have been moved to a new System Tools group, which replaces the Session Helpers menu of the Standard software — squeezing out the Instrument Tuner, Tempo Counter and Hum Canceller of the Standard software along the way. The Utility menu contains the same facilities in both versions of software.

The latest software seems extremely solid and reliable. Certainly, all of the little niggles I had with the v2.18 which I still had in my own machine (I never seem to find the time to update it!) have been cured, and I didn't discover any new ones during the review period. It's a shame that there are still no test functions specifically designed for digital audio data streams.

If I had to find something to whinge about, the best I could do is to suggest that a software option should be added which writes data on the LCD screen upside down! Such a facility would allow the Toolbox to be held in the left hand and operated with the right, for users who prefer to work that way. Not much of a complaint is it? The new Audio Toolbox Plus is everything a professional could want in a versatile portable audio test set, whilst retaining the uniquely intuitive, fast and easy operating system which marked the original Audio Toolbox out as something special.

The Audio Toolbox Plus addresses all of the legitimate criticisms of the original 'gameboy' unit to broaden its appeal across a wider range of professional applications. The release of the even more comprehensive Contractor's version of the software will also help to secure its position as one of the leading portable audio test sets.