Rhythm is a multi-sample playback interface with an eight–step sequencer and five–channel mixer. It is the brainchild of games developer Gil Carmel, who enlisted the help of interactive designer Christopher Paniati and composer Ted Masur in his quest to create a playful and easy–to–use app that would have some educational value. 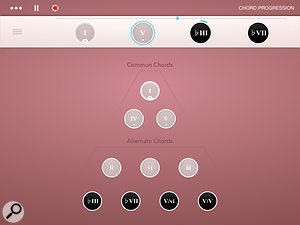 Rhythm’s Chord page is the starting point for a new composition.When it is first opened, the app guides the user through a tutorial which helps them build a composition, one step at a time. The app starts by providing three related piano chords that can be dropped into four sequencer slots in any order. The four slots, known as measures, can be expanded to eight from a little drop–down control panel, which also has a tempo slider running from 65 to 200 bpm, a key selector (with all 12 chromatic key options) and major/minor selector. Any of the above parameters can be changed during play or when recording a performance, and the app handles the changes pretty seamlessly, although sometimes the loops take a while to kick back in, depending on the sequence that’s loaded at that moment.

Alongside the three main chords is a panel of seven alternative chords, all of which are musically related, and these dynamically alter if the key is changed from major to minor, or vice versa. Once again, the user can drag and drop the chords into any location they choose. 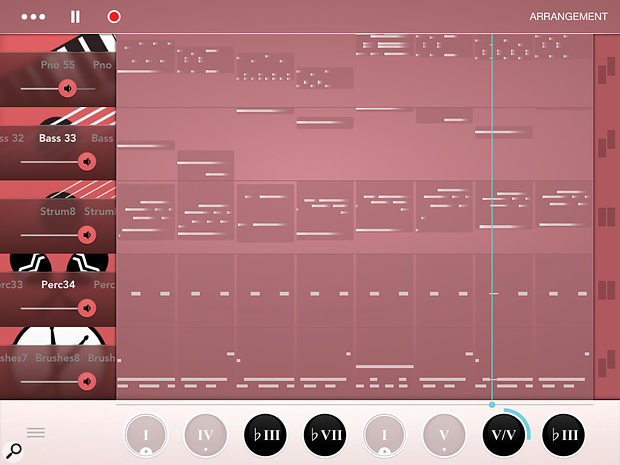 Rhythm’s Sequence page gives you a simple overview of your composition.

Once a pleasing sequence is in place, the user is ready to move to a display which looks a little bit like a basic DAW tracking page. Here the app displays five instrument channels, each with its own level fader. Each channel is restricted to one type of instrument, so there is piano on channel one, bass on two, guitar on three, percussion on four and drums on five. A fixed menu of loops is available to each channel, and the user is encouraged to swipe through them until they find some that appeal. In all, there are 56 pianos, 34 basses, a mix of strummed and picked guitar patterns, 45 percussion options, and a combination of 15 brushed and 30 stick loops in the drum channel.

Tin Pan have certainly recorded some really nice samples, focusing on acoustic sounds rather than anything too electronic, distorted or effects–laden. There is no way of EQing the audio or manipulating it with processors within the app, but the material has been so carefully arranged and played that it doesn’t need any interference for it to sound coherent and well balanced.

Although the mixer options are extremely basic, the user is given quite a lot of control over the pitch of each measure/loop. For example, it is possible to group all the measures in a channel and shift them up or down within the octave, or de–group them and adjust their pitches independently.

Performances are recorded simply by tapping a Record button at the top of the page, and the resulting file can then be emailed, opened in another compatible app, exported by AudioCopy or shared on Soundcloud. The resulting file is an MP4a rather than a WAV, which is probably an issue Tin Pan should address if they want the app to appeal to the home recording market.

In its current state, the app is quite restrictive compared to music software aimed at composers and producers. The sequencer is extremely limited, there’s no facility for importing custom loops, the mixer lacks EQ, pan controls, mute and solo buttons (muting and soloing has to be done by moving the channel level faders), and there are no effects to send anything to.

Nevertheless, Rhythm is a very enjoyable app which is extremely easy to use, and a great tool for introducing children to the joys of music making without first having to explain theory or have them achieve a level of competence on an instrument. My children love it and I must admit that I’ve had a great deal of fun playing with it too.