Oracle is billed — accurately, as it turns out — as a “modern sound design” library. It’s a mixed toolkit of large-scale elements to pump up your TV, film and game scores. Once you’ve found a home for the 2GB+ of samples and performed some manual actions such as copying impulses for the convolution reverb, Oracle is ready to dispense its sounds, if not its wisdom. 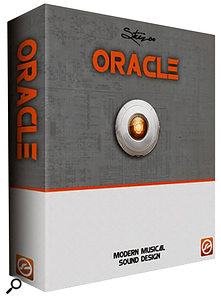 The stash of material consists of over 300 individual Kontakt instruments, which, for ease of access, are arranged in categories such as arpeggios, atmospheres, lead-ins, percussive elements, loops, reverses, synths and more. It’s immediately obvious that Casey Edwards, the library’s creator, has a great ear for sounds that add gravitas to your tracks. Take Tonal Hits, for example. These are of the powerful, brooding variety and wouldn’t be out of place backing warring superheroes, brain-sucking aliens or tense moments in a baking contest. Many TV scoring briefs call for Hollywood-scaled production values, so I was immediately taken by the collection of Percussive Loops. They have a similar character to the edgy, well-sculpted patterns of NI’s Evolve Mutations or Sample Logic’s Morphestra, and each loop is potentially an instant musical backbone.

Pounding my way through Percussive Elements and a frankly obese selection of processed drum kits, I was blown away (almost literally) by the bottom-heavy Booms, clangorous metal kits and doom-laden slammers. The standard doesn’t falter when you turn to Oracle’s (slightly) softer side either. The Atmospheres and Drones are impressive throughout, if a touch fixated on misery and desolation. Stand-out patches include the churning ‘Hells Bells’, the dissonant wail of ‘Torture’ and the rumbling ‘Feed The Beast’. Unsurprisingly, the Horror category goes even darker; patches such as ‘Black Corridor’ and ‘Night Terror Impacts’ serve up terror and revulsion in equal measures. Imagine waking to a killer hangover to see Sly Stallone’s mum gazing adoringly at you across the pillow. It’s that level of scary.

The combination of unique reverb spaces and pre-processed raw samples gives many of the instruments a distinctive flavour. Although you’ll happily use the presets straight out of the box, there are ample ways to filter, equalise and personalise them if necessary. Alongside the standard effects are more exotic options such as a granular processor, which is ideal for drastically messing things up, while for rhythmic chopping, pulsing and squelching there’s a built-in gate and filter sequencer, along with a pretty decent arpeggiator. My only issue was an occasional need to prompt Oracle to take another look at its file system for the reverb impulses, even though I’d copied them as directed. Otherwise, I had a blast from start to finish. Oracle is a seriously potent collection of imposing, often gritty sounds. Its samples are readily accessible 24-bit WAVs too, so you aren’t necessarily bound to the Kontakt format. However, since they’re wrapped up with decent effects and EQ, plus filter and gate sequencing and more besides, they should prove longer-lived than most. Highly recommended.