The Digital Age By Chris Korff 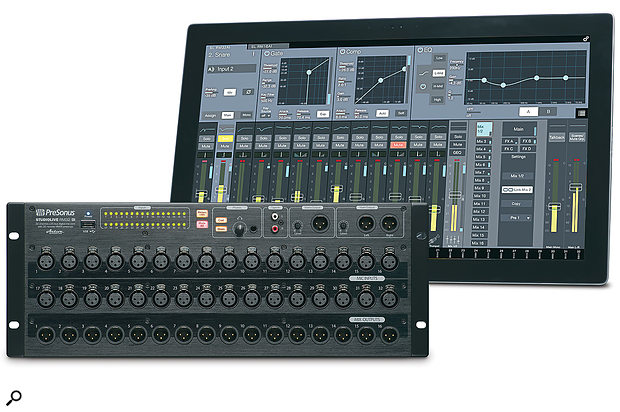 The digital mixer market shows no sign of slowing down. We round up some of the latest options from the biggest players.

The market for live digital mixers has boomed over the last few years — thanks in no small part, it must be said, to Behringer’s groundbreaking X32. What was groundbreaking about that model, though, wasn’t so much its features and capabilities (digital consoles aren’t exactly new to the scene) as its price. Things like digital snake compatibility, show and scene recall, motorised faders and touchscreen interfaces had, until the X32, been the preserve of prohibitively expensive touring–grade consoles, but you’re now almost as likely to see Cat 5 snakes and iPad–wielding engineers at small gigs and acoustic stages as you are at the O2s and Glastonburies of this world.

As a consequence of this digital democratisation, a huge number of digital desks, tablet–controlled racks and iPad–docking mixers are now available, and the list seems to be getting longer every month. Many of them we’ve already reviewed, but the last half year or so alone has yielded yet more that we haven’t had time to give the full SOS treatment, but which we’ll round up here for the benefit of anyone who’s itching to buy a new digital mixer but can’t wait until we’ve reviewed all the latest models.

One of the more recent trends in the affordable console market is the omission of physical controls, with an iPad or similar being relied upon to do the actual mixing. This allows mixer designers to combine the requisite DSP and I/O into a single rugged unit intended to live on the stage. It can thus function as its own stage box, completely eliminating the need for a snake. 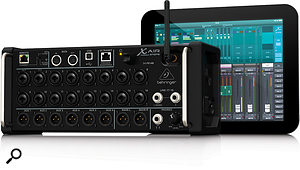 The Behringer X–Air X18.One such device is the PreSonus StudioLive RM32AI, which essentially takes the innards from the ‘traditional’ console–format StudioLive desks and crams them into a socket–laden 4U rack. With 32 mic inputs and 16 line outs, plus all the processing of its fader–equipped stablemates (a graphic EQ for every bus, Fat Channel EQ and dynamics processing per channel, and four independent effects engines), it looks a powerful beast indeed.

Remote control is achieved via PreSonus’ UC Surface software, which is available on Windows, OS X and iOS. All the usual mixer–control app stuff is there (pages for input and group faders, effects control, routing and so on), plus one rather neat feature that PreSonus call Filter DCAs. When you first start assigning channels, you can designate the inputs according to their sources (eg. snare mic, bass DI, guitar–amp mic). The mixer will then automatically assign these channels to their own DCA groups, after which you can make broad–brush adjustments to the mix using handily named DCA faders for drums, guitars, vocals and so on. 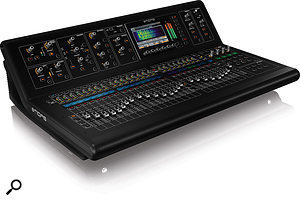 Midas’ M32.And finally, the RM32AI can also work as a fully fledged FireWire 800 audio interface — so you can use it in the studio, then simply unplug it in the evenings for live–sound work.

Earlier this year, British console manufacturers Soundcraft caused a bit of a stir when they announced the UI series of rackmount mixers. Similar in nature to the PreSonus RM series, Soundcraft’s offering is likely to win favour for its remarkably low price (the top–end 16–input version is selling for only £500 or so), as well as the fact that it incorporates Lexicon, dbx and Digitech effect algorithms into its three effects engines.

One unique aspect of the UI range is that, rather than being controlled by an app, you can control it from a browser running on any device that is connected to it (either via Cat 5 cable or to the UI’s built–in Wi–Fi). The advantage of this approach is twofold: first, you can control it from anything with an HTML browser, be it a phone, a tablet or a laptop (even a Playstation, if you’re that way inclined!). The other major advantage is that, because it’s HTML and not app based, no software development is required — so should Apple release a version of iOS that older apps don’t work on, you won’t be left in the lurch; just fire up the browser and away you go.

Another recent iPad–controlled mixer is the Behringer X–Air. Following broadly the same hardware format as the StudioLive RM and UI mixers, the X–Air, like PreSonus’ offering, can work as a multi–channel audio interface (this time over USB). What sets this one apart from the others, though, is its compatibility with Behringer’s Ultranet audio–networking protocol — which means you can use it with the P16 personal monitor mixing system. Behringer also say that it will offer deep integration with their upcoming X–Touch motorised–fader control surfaces, meaning you’ll be able to build up a kind of modular mixing environment rather like a budget version of Avid’s S3L system.

Fader–fiends needn’t fear, however: there have also been some fine–looking traditional consoles released in the last year or so too, like Midas’ new M32. With its angled control panel and 25 motorised faders, this distinctly ‘pro’ looking desk has a whopping 32 mic inputs and 16 line outputs (not including six aux ins and outs), as well as both Ultranet and AES50 Ethernet ports, enabling connection to a plethora of external stage boxes and personal monitor mixing systems. It probably goes without saying that the audio quality is claimed to be superb (Midas do have some experience in this area), and the company have also apparently gone to great lengths to give it an extremely intuitive interface. 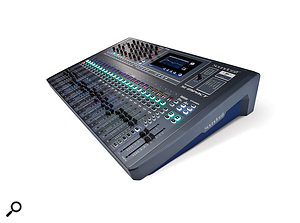 Soundcraft’s FaderGlow–equipped SI Impact.Another newcomer from the UK is the latest addition to Soundcraft’s Si range, the Impact. Also rich in socketry, it has an impressive array of encoders on its top panel, and is designed to offer a familiar interface to people who are new to digital mixing. Like other SI desks, it features the eye–catching FaderGlow — a system of LED backlighting under the fader slots that changes colour depending on what that fader is controlling, so you can tell at a glance whether you’re adjusting channel levels, an aux mix, output buses or graphic EQs. With 32 mono and four stereo inputs, and 26 motorised faders to control them with, it looks like a remarkably potent desk for such a small package — and while pricing hasn’t yet been confirmed, it’s rumoured to be very competitive. 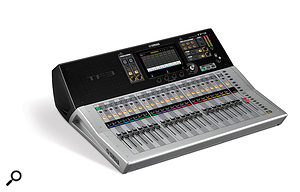 The new TF3 from Yamaha.And lastly, there’s the Yamaha TF range — a classy-looking desk incorporating a touchscreen and accompanying ‘Touch & Turn’ knob, which can control whichever parameter you’ve selected on the screen (if you’ve ever come a cropper trying to turn a rotary control on a touchscreen interface, this simple idea might look very welcome indeed!). Other ease–of–use headlines include the GainFinder — a display that helps you set the optimum input gain for each channel — and the ability to set initial compression and EQ settings with a simple one–knob adjustment. For instance, you can dial in a compression ‘amount’ quickly, and then navigate to the compression page to tweak it further from there.

Models in the range come with between 16 and 32 mic inputs, and a generous 16 line–level outputs for your mains, buses, auxes and matrix outs. All of those I/O can be piped to and from a computer via USB for multitrack recording, and stereo recording and playback to/from a USB disk is also supported.

Like the models mentioned earlier, all these fader–equipped desks can also be controlled via apps and tablets and whatnot. If you plan to spend a lot of time controlling your mixer with an iPad, it’s worth trying the different apps out before you commit to a specific model. Pretty much all the control apps are free, and they will usually let you play around with the interface even without a desk connected, so you can get a feel for how each desk will behave and so pick one that you feel comfortable with.