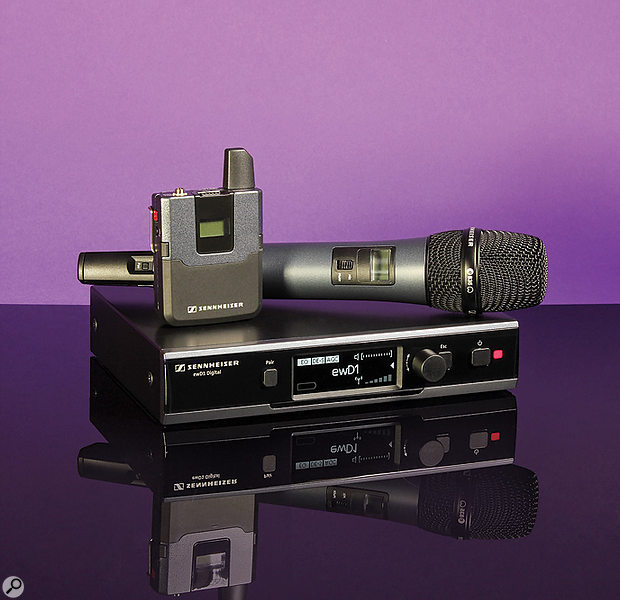 Digital wireless technology has very quickly come to the fore in recent years, its wide dynamic range and low–noise operation putting its sound quality well ahead of most of its analogue forebears. For the gigging musician, systems such as this one that work in the license–free 2.4GHz band (this model uses the 2400 to 2483.5 MHz range) are very attractive, and though this band is also used by countless other Wi–Fi devices, I’ve never run into problems with them so far. Sennheiser’s evolution D1 is designed to be affordable, reliable and easy to operate, and is available in both Vocal and Instrument versions.

We were sent both versions, but there are many common features. Both use the same receiver and have the ability to run up to a maximum of 15 separate channels, though this may well be fewer in sub–optimal conditions, and automatic frequency management helps the system pick out the clearest frequencies to use.

Each kit comes in a sturdy, foam–lined plastic carry case; the guitar version contains the SK D1 bodypack transmitter and short mini–jack to quarter–inch jack guitar cable, an EM D1 rackmount receiver with NT 12 power supply and, of course, a manual. In the microphone version the mic substitutes for the belt pack transmitter and guitar cable.

For this system, Sennheiser use an audio sampling rate of 48kHz with 24–bit resolution. The receiver employs dual antennae with auto switching based on time and frequency diversity to always capture the strongest and cleanest signal. The transmitter power can be up to 100mW, but varies depending on the county in which the system is operated as rules differ from country to country. The system is specified as adding no more than 0.1 percent distortion and has a signal–to–noise ratio exceeding 105dB (A–weighted).

The total latency from transmitter input to receiver output is 3.9ms, which is low enough to be negligible when using conventional stage–monitor speakers but may cause issues for more sensitive performers who use in–ear monitoring. This is likely to have less impact on guitarists than vocalists, who hear their own voice without delay via bone conduction and then again a few milliseconds later via the in–ears. While this time is far too short to be perceived as a delay, it can combine with the bone-conduction sound in ways that some singers find off–putting. In fairness, all digital systems add a small amount of latency, so it’s something we have to learn to live with.

The half-rack receiver’s audio output is available on both an unbalanced jack and balanced XLR, where the output signal can be at either mic or line level and then further adjusted in 1dB steps from within the receiver’s menu. Power to the receiver comes from an included external PSU connected via the usual push–in coaxial plug, and the unit requires 350mA of current at 12V DC. A plastic clip grips the cable to avoid accidental disconnection. The two antennae include hinged swivels and are connected to the rear of the receiver using integral coaxial connectors with screw threads. 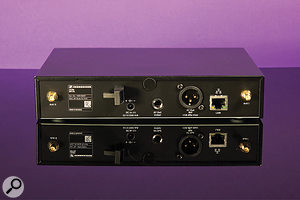 The receiver features both balanced and unbalanced audio outputs, plus an RJ45 network socket that allows for remote control and monitoring of a D1 system.Accessed via the receiver’s menu system is a low–cut filter (–3dB at 120Hz), a seven–band graphic equaliser, a de–esser and the option of automatic gain control with an automatic make–up gain function. An RJ45 Network socket is fitted and uses the Media Control Protocol for remote control and monitoring of the system. When the transmitter is switched off or out of range, not only does the receiver power LED turn red, but the receiver’s LCD also flashes between black–on–white and white–on–black, interspersed with a No Link message.

Control over the receiver’s parameters is via a rotary encoder that incorporates a push switch with a separate Esc(ape) button immediately to the right of it. A monochrome LCD shows the menu options, which are divided between system, audio and network settings, with separate pages for adding a name and for conducting a walk test to establish the range. The low–cut EQ can be switched on or off while the graphic EQ can either be set up conventionally as a custom setting or you can choose from a range of ready-made presets covering voice and acoustic guitar. A de–esser offers two preset modes, while the two automatic gain control options, which sound to my ear like two degrees of compression, may also be enabled or disabled via the audio menu. When any menu selection is adjusted, the encoder needs to be pushed again to save the setting.

When the menus are exited, the display shows whether the EQ, AGC or de–esser are active, along with the RF signal strength and the audio level. Other than a power button and a pairing button for setting up the mic or belt transmitter being used, that’s pretty much it.

Combining an SKM D1 handheld transmitter with a Sennheiser 835 cardioid–pattern dynamic head (packages with other heads are available), the mic feels comfortable in the hand, though is equally at home on a mic stand. A tiny LCD side window on the body shows the channel details, RF signal strength and battery status when the mic is active, and there’s a small slide mute switch directly below it. At the tail end of the mic is a small recessed power switch with integral LED indicator, and a pairing button for setting up the mic with the receiver. This whole rear assembly slides out for fitting two AA batteries. A very robust basket provides both protection and effective pop reduction. Though longer and a little wider in the body than a typical wired mic, the weight is roughly the same.

When first powered up, the mic’s power LED is red, as is the one on the receiver, but once paired, both lights turn green. The power switch needs to be held for a few seconds to switch the mic on or off, which again helps avoids accidents. If the mic is muted, both the mic and receiver LEDs turn amber. 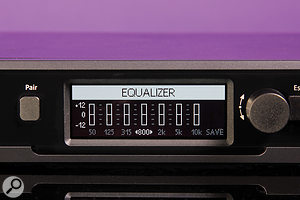 The EM D1 receiver incorporates many digital signal–processing options, among them automatic gain control, a de–esser, and a seven–band graphic EQ.Setting up the mic is extremely intuitive and takes only a matter of moments, and the sound quality is all you’d expect from a piece of Sennheiser kit — a clear vocal sound, negligible background noise and stable reception, unless you wander out of range, in which case the output will mute. While the range will vary depending on the conditions, it is more than adequate for normal stage work and compares favourably with the range you’d expect from any other Wi–Fi device. Whether it will extend to covering zip–wiring from the balcony of the London Palladium is a different matter.

Tonally, the balance seems optimised for use with the mic close to but not touching the singer’s lips. The various EQ presets, with the obvious exception of Megaphone and Telephone, are all nicely subtle; set flat, the mic has a clear yet warm quality that can be further tweaked via the EQ to suit most voices. The de–esser helps tame mild sibilance, with no obvious side effects, though for anything more serious an external de–esser with a full control set might be a better option. The level falls off dramatically as you back away from the mic or move off axis, which helps keep feedback at bay.

The instrument transmitter pack, which has an integral belt clip, is designed specifically for use with musical instruments such as electric guitar. Its input impedance is 1MΩ, and the transmitter input is on a lockable 3.5mm mini-jack. The transmitter operates from a pair of AA batteries offering an operating time of up to six hours, the same as the microphone, so fitting new alkaline batteries or fully charged NimH batteries before each gig is advisable. Alternatively, the optional BA 30 Li–ion 3.7V pack give an operating time of up to 11 hours. The audio bandwidth is from 20Hz to 20kHz. The mini display, power switch, muting switch and pairing controls are essentially the same as those on the mic, except the power switch and its status LED are separate.

The audio from the guitar link is extremely clean, but to get your amp or pedals working correctly it is important to adjust the levels so that what comes out of the receiver is at the same level as what you’d expect from the same guitar plugged in via a cable. Because 24–bit converters have a very wide dynamic range, there’s no problem when backing off the guitar’s volume controls as there was with some of the older analogue systems that needed noise gates to keep the hiss at bay.

It is worth mentioning the issue of cable capacitance. The short cable that connects the guitar to the transmitter will have less capacitance than a typical three– to five–metre guitar lead, which may or may not be a good thing. Contrary to what some cable manufacturers would have you believe, cable capacitance doesn’t always ‘suck tone’ — sometimes it is needed to correctly load the guitar pickups to put their resonant peak in the right place. This is something that can only be judged subjectively, and for my own system I’ve made up a cable that has one of those fancy Neutrik jacks on one end that includes a switchable set of tiny capacitors. You just plug in and then select the one that sounds right. This is a good option if you feel your sound has changed in a way you don’t like. However, many players like the slight extra brightness that a low capacitance cable delivers.

You Say You Want An Evolution

Summing up then, the Evolution Wireless D1 Vocal and Instrument systems are easy to use and include a number of features that you might not normally expect, while the clear LED status signalling should keep you out of trouble. Built for serious live use, the sound is essentially the same as from their wired counterparts. While not the cheapest wireless options, the price is actually very attractive for such a well–engineered product bearing the Sennheiser name, and is well within reach of the serious gigging performer.

I’ve tried Wi–Fi band digital systems from Line 6 and from AKG, both of which have also delivered very clean audio quality, but the choice widens every day.

Sennheiser have come up with a series of radio packages that are hard to fault at the price.