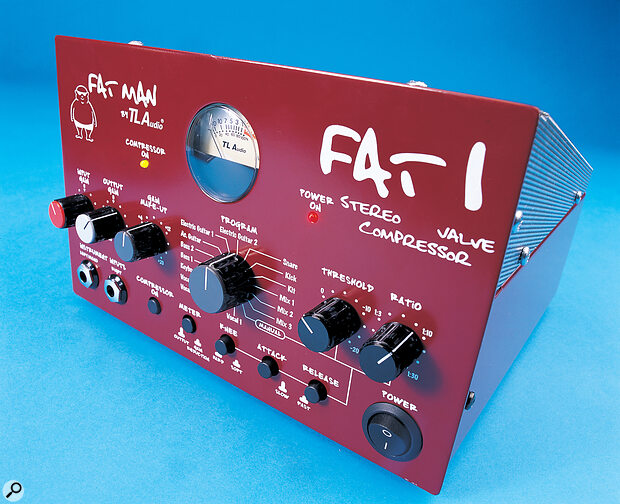 Paul White changes his manual‑gearbox compressor for an automatic model to see whether performance or economy suffer.

The compressor is one of the most useful studio tools, but also the most frequently misunderstood. Unlike conventional effects, where the result is usually fairly obvious, a compressor can often work quite subtly, and unless you know exactly what to listen for it can appear that quite large control changes make little difference. For example, even a heavily compressed vocal can sound pretty natural with the right unit and settings — all you really notice is that it sits in the track a little better without the level wandering all over the place.

We have had preset synths and preset effects for many years, but few designers have explored the possibility of providing preset dynamics processing. To be fair, making a fully automated dynamics processor probably isn't possible, because the amount by which an input signal is processed will always depend on its initial level. However, TLA have taken the concept pretty much as far as is practical with their new Fat 1. In essence, the Fat 1 is a hybrid solid‑state/valve compressor that features 15 preset treatments optimised for different instrument and vocal types as well as providing conventional manual adjustment. Because compression is a level‑sensitive process, the user still has to adjust the input gain level, but in auto mode, that's pretty much all that's necessary aside from setting the Output Gain and Gain Make‑up controls.

Cosmetically, the Fat 1 represents a departure from TLA tradition as it isn't a full‑sized rackmount unit. Instead, the designers have made it very squat with a raked, perforated metal top for ventilation — the front panel is 3U high and half‑rack width, though I'm told that a matching red rack tray will soon be available which can hold one or two units within a standard rack width. At the heart of the circuit is the same transconductance gain control circuit as used in the Classic and Ivory compressors, while an ECC83 dual‑triode valve is used to furnish each channel with a tube gain stage prior to the compression section. The line inputs and outputs are on balanced TRS jacks and the controls are set out for dedicated stereo operation. It's possible to use the unit in mono by plugging only into the left input, in which case the same signal appears at both outputs. However, there is no dual‑mono operation available, and nor is there a side‑chain input — given its price and the market at which it is aimed, though, these ought not to be major drawbacks.

The operating level may be switched, using a rear‑panel button, between +4dBu and ‑10dBV. Each channel has an unbalanced high‑impedance (1MΩ) jack input for instruments, enabling the unit to double as a DI box. Unbalanced operation is simply a matter of plugging in unbalanced connectors but, as is often the case, the maximum output level is 6dB less when unbalanced than when balanced. In this case, the maximum output level is 26dBu when used balanced or 20dBu when used unbalanced, which means there should be adequate level available to feed digital recorders and soundcards where digital full scale can equate to anything up to 20dBu.

The control panel is painted a cheerful red, complete with gravitationally challenged male humanoid motif and a very casual typeface that verges on graffiti. A small moving‑coil meter shows either the output level or the gain reduction, depending on the setting of the Meter button, while a 16‑way knob selects either the manual mode or any of the 15 presets. Conventional knobs are fitted for adjusting the Input Gain, Output Gain and Gain Make‑up while the remaining Threshold and Ratio knobs only operate in manual mode, as do the Knee, Attack and Release buttons. Both Attack and Release can be switched to Slow or Fast, but there's a degree of programme‑dependent automation built into these parameters, so only having switchable settings isn't as limited as it might seem. Either hard‑ or soft‑knee compression can be selected in manual mode, but the choice is made for you when you pick a preset.

The presets combine the appropriate choice of hard‑ or soft‑knee compression with suitable threshold, attack and release times. These are designated: Vocal 1 (light); Vocal 2 (medium); Vocal 3 (hard); Keyboards; Bass 1 (medium); Bass 2 (hard); Acoustic Guitar; Electric Guitar 1 (medium); Electric Guitar 2 (hard); Snare; Kick; Kit; Mix 1 (pop); Mix 2 (rock), and finally Mix 3 (dance). Switching is achieved using a CMOS multiplexer circuit that brings in different component values for the different presets and operates digital switches within the circuitry. No information was provided in the Fat Man's documentation to describe the settings used by the various presets, but apparently TLA plan to supply such information with the machine when it goes on sale, which will be handy for knowing how the presets work, and quite educational.

Most of the time, I can get by with three or four different compressor settings and just vary the amount of compression to suit each case, so it didn't surprise me in the least to find that 15 presets were perfectly adequate to take on 99 percent of known compression tasks. The Input Gain control is used to adjust the actual amount of the compression and the gain‑reduction meter shows just how much the dynamic range is being squeezed. I wouldn't argue with any of the preset designations, though there are instances where you can take an apparently inappropriate preset and make it work in a different context. For example, the drum kit setting also manages a mean funk electric guitar.

In subjective terms, the compression is smooth: it has a flattering, thickening effect on the majority of sounds, and when you do push it hard the side‑effects are more musical than annoying. For overall mix treatment, Fat 1 is nicely transparent providing you don't overdo it, whereas when you use it as a DI you can compress electric guitar fairly heavily to create a liquid, effortless sustain. What's more, it doesn't seem to suffer from that annoying popping that sometimes occurs with lesser compressors when treating picked guitar.

In general, Fat 1 sounds much like any other TLA hybrid compressor, but the presets make it much easier for the less experienced user to get results quickly. Those who need a little more flexibility can switch to the manual mode, and though the attack and release times offer only two variations each, this doesn't seem to matter too much — clearly the programme‑dependent stuff works pretty well.

Fat 1 must be considered a success, especially at the modest asking price of under £300. It is very easy to use, it sounds supremely classy and it looks the part. I wouldn't be surprised to see it being joined by some Fat chums in the near future.

Compression made easy without compromising sound quality or placing too much of a burdenon the credit card. Makes a great DI box too.