Want your loops to sound like they've been badly mastered, pressed to cheap vinyl and fed into a budget sampler? Tone Projects' plug‑in does it all. 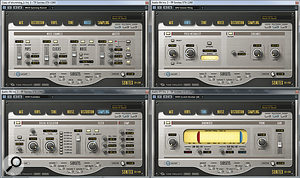 Sonitex STX 1260 from Tone Projects is billed as "the ultimate lo‑fi workstation”, and the aim of its designers is to reproduce all the subtle audio degradations that can take place in the 'life span' of a typical audio sample. It thus begins by modelling a simple mastering output stage, before simulating the audible effects of pressing to vinyl, being played back from vinyl, and going in and out of an old‑school digital sampler. By reproducing all of these individual stages, the idea is that this plug‑in should capture all of the mysterious mojo of sampling from vinyl, in a way that simpler, single‑stage distortion plug‑ins can't.

Sonitex STX 1260 by Sound On Sound

The Sonitex STX 1260 interface is a neat and well‑organised affair, involving a lot of virtual brushed metal. Its many controls are distributed across six pages, each of which represents a stage in the signal flow described above. Each of these pages also features six buttons that, in effect, store factory presets for that page's settings, while individual processes can be switched on and off to save CPU resources. There are also three possible orders in which the modules can be routed.

Not many plug‑ins place master compression and Mid/Side processing first in the signal chain, but given what this plug‑in is supposed to do, it's the logical choice. The controls are very simple, with dynamics ironed out using Speed, Ratio and Mix parameters, and stereo width likewise adjustable using a pair of knobs. So, although you wouldn't actually want to use this for mastering, it does provide a quick and reasonably effective way of adding the kind of character that typical mastering processing might apply, which I suppose is the point.

Next up is Distortion, which, conceptually, seems intended mainly to mimic the artifacts of mastering to tape or some other non‑linear destination. Quite what the 'guitar amp' flavour of distortion is doing in this context I'm not sure, but it adds to the versatility of a process that goes well beyond subtle tape or output‑stage warmth. With pre‑emphasis and pre‑filter options, plus a Mix control to blend in the unprocessed sound, there's a lot you can do with this section alone. It's very effective at adding a crunchy edge to a too‑clean recording, and can go further, though it doesn't reach the realms of sonic mayhem you can get from the likes of Sound Toys' Decapitator.

The centrepiece of the Sonitex STX 1260 experience is its vinyl emulation, which is pretty comprehensive. Divided across three pages, it mimics not only the bandwidth constraints of vinyl, but also its pitch instability, sibilance and different types of surface noise. All of this is highly configurable, so you can turn your pristine loop into anything from an audiophile high‑grade disc played for the first time, to a knackered charity‑shop find. In fact, it can do more than just vinyl; the presets include some quite effective cassette-tape emulations, and the band‑pass filter used to control bandwidth is resonant, so you can set up a fairly convincing tape 'head bump' if you want to.

The Noise stage is particularly flexible. Not only can you choose from 25 preset types of surface noise, but you can also load your own noise samples, and there are numerous options as to how the noise should integrate into the sound. For example, you can choose whether or not the noise itself should be subjected to the bandwidth limitations defined in the Tone section; you can gate the noise so that it only appears when the source signal crosses a threshold; and you can choose to have it adapt to the dynamics of the source signal. There's also a Sync option, which is supposed to ensure that noise starts and stops with host playback rather than being output continually when playback is stopped. This didn't seem to do anything for me, in Cubase 6, but you can use the gate to similar effect.

Finally, the Digital stage is a fairly typical 'bit crusher', which allows you to reduce both bit depth and sample rate, and apply appropriate (or inappropriate) anti‑alias and resonant output filters. Again, this is dripping with features, including an intriguing 'Bit Gate', which seems to introduce some sort of expander into the process, with interesting consequences for drum loops.

All in all, Sonitex STX 1260 is one of those plug‑ins that could keep you busy for quite a while. Unless you go crazy with the bit‑crusher, it's not that easy to unleash anything truly unhinged on the world, but as a means of adding character to samples, it's very flexible, with vinyl emulation that is easily convincing enough for most situations. Not being a big user of loops, I personally found it most useful as a pure distortion processor, running as an auxiliary effect to add colour to vocals or drums. In this role, its big plus is the accuracy with which you can shape the tone of the distorted signal. For mangling drums beyond recognition, I'd choose something else, like Sound Toys' Decapitator or Ohm Force's Predatohm; but for adding just a bit of bite that helps the snare cut through the mix, this is perfect.

Surf to /sos/may11/articles/sonitex‑stxmedia.htm if you want to hear some of the many abusive things that this plug‑in can do to an innocent drum loop!

Sonitex STX 1260 will make your music sound worse — but in a good way!