Americana is an addition to the Toontrack expansion library portfolio for EZ Drummer and is best described as an American-sounding range of drum kits recorded 'honestly', so that they still retain the character of a real kit played in a real room, rather than being subjected to extensive processing and production tricks. The samples for these kits were recorded in the Congress House Studio in Austin, Texas, supervised by engineer Mark Hallman. The drums were played by Stephen Belans and Mark Hallman and the MIDI parts were performed by Thomas Hedlund. In the main, these recordings make use of Fibes Maple and mid-1960s Ludwig kits with a few special additional samples, such as snare drums without the snare and some less common cymbals and 'crashers'. The format remains the same as for other EZ Drummer expansions, with each drum including a tab that shows the alternative sounds available so you can mix and match the various kit items. There are also drag-and-drop MIDI files of various rhythms suited to the Americana genre. 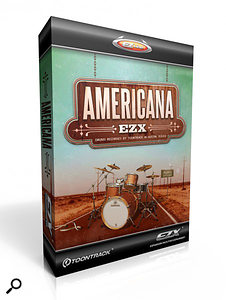 Kit number one has a choice of 22-inch or 16-inch Fibes kick drums, a Ludwig Black Beauty snare fitted with a Remo Vintage A-coated batter head and a pair of 12- and 16-inch Fibes toms. These are teamed with 14-inch Zildjian New Beat hi-hats, a 16-inch Zildjian K dark crash medium thin, an 18-inch Bosphorus Ferit series crash and a 20-inch UFIP Natural-series ride.

Kit Two comprises a 1965 Ludwig Burgundy Sparkle kit with a 22-inch kick and a Tama limited-edition Wood Hoop Snare plus 'snare off' samples. The toms for this kit are 12-inch and 14-inch, sampled both with and without the sympathetic snare vibrations, and the heads are Remo-coated Ambassador X. The hi-hats for this kit are 14-inch UFIP Class series with 15- and 16-inch Zildjian crash cymbals, plus a 19-inch Zildjian Armand 'Beautiful Baby' ride cymbal with three rivets.

A third kit is sampled with brushes, again based on a Ludwig 1965 kit, but this time with a 14- by five-inch Ludwig chromed brass edition reissue snare drum. The toms are, again, 12- and 14-inch Ludwigs with the two 16-inch crash cymbals and the 20-inch ride by Zildjian. Extra samples come from a six-inch Factory Metal Percussion Cross Crasher and 10-inch celtic bell. There are also Plugs Percussion Sizzle Strip samples, with the brushes played on both the narrow and broad sides.

The two kits give a choice of fairly mellow or 'brighter and tighter' characters, both of which come over as sounding extremely natural and unprocessed. They sound exactly like what they are, which is well-tuned kits recorded in a complementary studio space. Having the option of a little sympathetic snare buzz just adds to the realism. All the expansions I've tried so far have been meticulously sampled, and this one is no exception. Toontrack describe the sounds as raw, unrefined and without frills, which they are, but to my ears they also sound musically 'right', which is what really matters. If you're after class without gloss, this one is for you. Paul White