Continuing their assault on the monitor market, Unity roll out this premium three-way, active design. How does it perform? 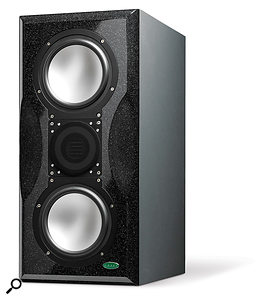 I reviewed Unity Audio's very impressive sealed-cabinet studio monitor, the Rock, back in April 2010 (you can read that review at /sos/apr10/articles/unitytherock.htm). There were plans for a larger sibling even then, but it has taken about two years to bring the active, three-way, sealed-cabinet Boulder properly into production, and for a cursing courier to manhandle the two huge boxes to my front door! In the two years since its launch, the Rock has already acquired a substantial user and fan base, and I'm quite certain the Boulder will do the same, since the two are so closely related.

In essence, the Boulder is a big Rock, sharing the same fundamental design principles and delivering the same impressive sound characteristics. The difference is that it goes louder and deeper, and provides even more resolution and clarity through the mid-range, thanks to a second bass driver, a clever coaxial mid-range unit surrounding the folded ribbon tweeter, some extra amplifiers, and a larger and more substantial cabinet.

As for its forebear, the design goal for this new speaker was to provide a "brutally honest tool” for making accurate, reliable mix decisions, but with a larger SPL capability and a more extended bottom end. The same design team was involved, acoustician Kevin Van Green developing the cabinet, Tim De Paravicini working on the discrete Class-A/B amplifiers, and numerous golden-eared pro-audio gurus auditioning the prototypes.

The Boulders employ the same unusual construction as the Rock, but with thicker Baltic birch plywood cabinets (18mm instead of 12mm) and a much thicker (30mm instead of 12mm) Corian-composite baffle, with even deeper radiused edges and sculpting around the mid-range driver and tweeter to minimise diffraction. Each cabinet measures 549 x 256 x 368mm (HxWxD) and weighs a hefty 23kg, so the Boulder is significantly larger than the Rock, but it's not overly huge and can be mounted vertically or horizontally.

Unity Audio have stuck with the sealed cabinet again — the sonic advantages being well worth the extra challenges and cost penalties placed on the driver and amplifier designs. The plain fact is that the sealed-cabinet approach enables a far better time-domain performance at the low end, and a gentle but extended bass roll-off. This combination makes it far easier to hear what is really going on in the bottom octaves, compared with listening on a poorly implemented reflex cabinet, because it's almost impossible to judge the EQ and balance of bass instruments when the speaker is smearing their acoustic energy in time!

The Boulder employs a pair of bass drivers together, to increase the power handling and provide a lower cutoff frequency. These are the same as the Rock's driver: 180mm (seven-inch) paper-pulp cones made by Elac, with a 0.2mm veneer of aluminium to improve stiffness and minimise harmonic distortion. An unusual asymmetric rubber surround with a double fold allows a large excursion range (more than an inch, in fact), which is a vital element in being able to generate such impressive levels of bass from a sealed cabinet. The response is claimed to extend from 39Hz to 30kHz (±3dB), but there is useful energy for another half-octave or more below that.

The tweeter is basically the same 'Jet III' folded-ribbon type used in the Rock, but it is surrounded by a clever, five-inch, coaxial mid-range unit. This employs a flat honeycomb ring-radiator to form an effective single-point source for all frequencies above about 700Hz. The coaxial arrangement means that the Boulder can be used 'portrait' or 'landscape', with negligible coloration or degradation of the stereo image.

Continuing the theme of 'the same but more', the Boulder uses the same amplifier modules as the Rock, but has four instead of two. These Class-A/B bipolar amplifiers, designed by Tim De Paravicini, use very low levels of negative feedback, have passive overload protection, and feature custom-wound transformers to couple the amplifiers to the drivers.

While the Rock featured only an input sensitivity control, the Boulders additionally have two EQ switches. The first miniature toggle switch adjusts the sensitivity of the mid-range driver (which covers 694Hz to 3.5kHz) up or down by 2.5dB, and the second engages a 10kHz shelf EQ, again with a 2.5dB boost or cut. These EQ facilities afford a useful degree of forward/recessed variation in the mid-range, while the HF control is handy for balancing the speaker's impression of 'air' for a given room acoustic. 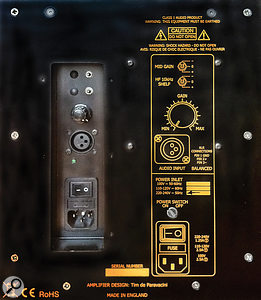 The Boulder's rear panel houses its mid-range and HF tuning controls, a gain pot, and the input XLR connector.

After placing the Boulders onto some sturdy stands and hooking up their input XLRs and IEC mains leads, I was immediately impressed with the sense of '3D' solidity in their sound and the natural presentation of vocals, as well as the astonishing bass extension and power. The Boulder isn't that big a speaker, but its performance at the bottom end was comparable to my significantly larger PMC IB1s.

The tonal balance is full-bodied but wonderfully tight and well controlled at the bottom end. This marries superbly with the crystal-clear, detailed and three-dimensional mid-range, and sublimely smooth but fast and precise top end. I did most of my listening with the speakers in portrait orientation, and found the stereo imaging to be wide, deep and stable, with a very wide sweet spot and no discernible coloration as I moved up and down or side to side in front of the speakers. In fact, their stereo imaging seemed to be a little better than that of the Rocks, with a better sense of separation between individual instruments panned across the sound stage.

The down side of such wide dispersion is that some care will be needed to control mirror-point reflections from the desk, console, ceiling and side walls. The Rock seemed particularly prone to stereo image degradation due to early reflections, and the Boulder is similarly picky. The coaxial mid-range/tweeter driver concept makes perfect sense but is often difficult to implement well, many incarnations losing more than they gain, in my view. However, this Elac system is extremely good, and quite possibly the best I've yet come across.

There aren't many sealed-cabinet monitors with an extended bass response: Blue Sky's Big Blue (reviewed in November 2007) and SP Acoustics' SP1 are two that come to mind, but both are larger than the Boulder. However, the advantages to this approach when trying to hear what is really going on at the bass end are made very plain in the Boulder. Bass notes are reproduced precisely, without the energy smearing and phase shifts of so many reflex-cabinet designs. Bass notes and kick-drum thumps have very defined beginnings and endings, with clearly audible pitch and timbre. Obviously, this is what a professional monitor speaker is supposed to do — but not all do, sadly!

One of the Boulder's design aims was the ability to play loud, and there's no doubt that it ticks that box. The published specs claim 113dB SPL at one metre, but the amplifiers and drivers manage to deliver transients without any hint of dynamic compression, and I suspect that the real figure is probably rather more! The quiescent background hiss level, meanwhile, is commendably low, and I had to place my ear right in front of the ribbons to hear it. However, while doing that I also noticed some low-level hum from the bass drivers of both monitors. This didn't go away when I disconnected the audio inputs, implying that the hum is generated internally rather than as the result of a ground loop. The Rock didn't have a hum issue, so hopefully this is a minor production niggle that can be addressed quickly. To put this hum in context, the hum wasn't audible from the listening position at all, but it's disappointing all the same.

The Boulders reproduce commercial music with very fast, clean transients, have a wonderfully solid and lifelike mid-range, and present masses of information and detail that so many lesser speakers simply gloss over. For example, I picked up on the faint Leslie speaker speed-change relay clicking in some Hammond jazz-trio recordings that I hadn't noticed before, and good brass-band recordings were reproduced with the kind of crisp high end that makes the hairs on the back of your neck stand up!

When working through a multitrack mix, I found the Boulders to be even more detailed and revealing than the Rock monitor — the inherent benefit of a three-way design. That translated directly into making the job easier, faster and less fatiguing. You simply don't have to work so hard trying to interpret what is going on; it's all laid out clearly before you. Bad mixes are revealed very plainly for what they are but, equally, it is easy to hear when you're getting it right too. That is what justifies the 'monitor' tag that many speakers claim, but few deserve.

The Boulder's voicing leans towards the traditional 'British' character, which is not overly hyped or 'shouty', but controlled, detailed, airy, and naturally balanced — but definitely not dull or soft! I really enjoyed listening to, and working with, the Boulders, which are seriously impressive professional monitor speakers. I had no sense of fatigue even after working with them all day, and I found it delightfully easy to make critical processing and balancing decisions. At £5160$7500, the Boulders are expensive, but the cost is easily justified by the remarkable level of performance, and they sit confidently among similarly priced peers.

The Boulder's UK pricing places it alongside such three-way models as Barefoot's MM35, Dynaudio's Air 20 and Quested's V3110. It is slightly more expensive than the Focal SM9 and Trident HG3, while the impressive Geithain RL904 and ATC SCM20SL pro are similarly priced but physically smaller two-way active alternatives.

Building on the Rock's legacy, the Boulder provides more of the same: it is louder, deeper and even more transparent. This large, sealed-cabinet, three-way monitor is extremely revealing and accurate, but easy to work with.