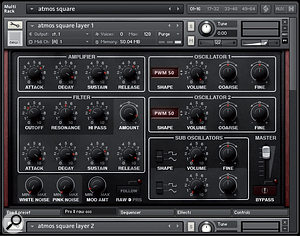 Pro II's Raw Oscillator page. This is where things really start to get interesting. Along the bottom you can also see the tabs for the other pages.

The Sequential Circuits Pro One is rightly regarded as a classic analogue monosynth. Its chubby timbres can be found on a slew of seminal records from Depeche Mode, Soft Cell and New Order, as well as later artists such as the Prodigy. In their homage to this small gem, Wave Alchemy have chosen not to model it as a soft synth but instead to painstakingly multisample an actual Pro One, hoping in the process to capture its unpredictable analogue magic. Inevitably, this approach yields a massive library. The full version of the Pro II runs to 3.9GB, which comprises 6587 samples, all in 24-bit WAV format. These are arrayed in 138 Pro One multi patches, 38 Pro II presets and 19 multi-rack patches, enough to keep you busy for some considerable time.

The only caveat to be aware of is that Pro II needs the full version of Kontakt 4 or 5 to run; it won't work with the free Kontakt Player. However, there are slightly smaller (and cheaper!) versions available for Ableton Live, Reason and EXS24/Logic, so prospective but Kontakt-less buyers should not be put off by that requirement. 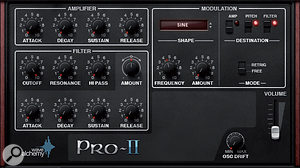 The Preset page gives you simple filter and ADSR controls over the preset patch.

Wave Alchemy have clearly put a lot of work into creating a clean, informative GUI, which is sub-divided into five main pages. A quick tour of these should give you an idea how Pro II works.

First off is the Preset page. After navigating to the Pro II library in Kontakt and loading one of the patches, this is the page from which you can start tweaking. Wave Alchemy are to be applauded for the simplicity of this approach: this page's ease of use will encourage newbies and old lags alike to experiment with the already excellent patches.

The left-hand side of the page features an amplifier envelope (ADSR in format), followed by filter controls and a filter envelope (also ADSR). On the right is a modulation section above a master volume slider which only affects this page's volume, not that of the Raw Oscillator page. Below this is a knob intriguingly labelled 'OSC DRIFT.' If you whack this up full, it's pretty much instant Boards Of Canada, as the tuning of the patch is allowed to wander rather wonderfully. Backing off slightly, it's easy to create a kind of drifty warmth that, to my ears, sounds very analogue. It's ironic that the drift of old polysynths, something I used to dread at gigs with extreme stage-lights, is now an added bonus!

As much as I love presets, it's the Raw Oscillator page that most excites me about the Pro II. This enables you to access multisamples of a Pro One's raw oscillators and make your own sounds from scratch. 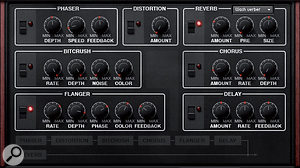 Pro II's Effects page.The left-hand side features the same amplifier and filter sections as the Preset page, but the right-hand side has controls for two oscillators and two sub-oscillators (the latter pair sampled from a Moog Source). There are also additional controls for adding both white and pink noise. The 'master' volume here, as on the previous page, isn't a master, it affects the volume of this page only, which makes it easy to take a preset and then add your own touches, balancing the relative volumes of each section. The Bypass button lets you quickly A/B to see whether your additions are actually enhancing the sound. The Follow button simplifies the patch-mangling process by linking the amplifier and filter controls of the Raw page to that of the Preset: tweak the Raw page's cutoff and the Preset page's cutoff will follow.

The oscillators sound marvellous. Rich, full, and somehow more alive than a lot of soft synths I've used. Wave Alchemy have obviously thought carefully about this section, to the point where the two oscillators use different sample banks to preclude phasing. Now, that's detail.

There are many starter, vanilla patches on offer, and using them in combination with this page you can really get down to the nitty-gritty and construct very authentic patches that wouldn't sound out of place on a Pro One. Well, unless you're playing polyphonically, of course. 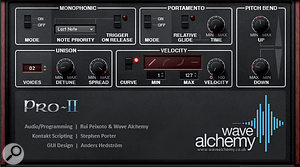 The Controls covers general options such as polyphony, portamento and picth-bend.Wave Alchemy use Kontakt's native engine for their Effects page, but have also added their own reverb impulse responses, sampled from an Eventide DSP7000 Harmonizer. So as well as the reverb we have a phaser, flanger, bit-crusher, chorus, distortion and delay. Wave Alchemy's own presets show the lengths to which they've gone in utilising the effects engine. There are some utterly gorgeous patches here, and, again, they're very easy to tweak. Effects can often swamp a synth, but those found here make it easy to expand a sound instead of hobbling it. I love the HH tape delay in the reverb section; instant 1982.

Finally, the Controls page gives you access to parameters such as monophonic mode, portamento, velocity responsiveness, pitch-bend and a unison mode. Everything worked as it should, but I found the unison to be rather spongy beyond four voices; at the full eight, it seemed to thin the sound instead of enhancing it. Maybe this is a result of the sampled nature of the instrument? 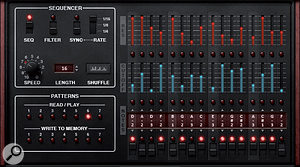 The Sequencer page. Be very careful with that button marked 'Filter'...

One of the things I most love about the flesh and blood Pro One is its sequencer. The simplicity of use, coupled with its instant transposition, made the synth an instant bass-line generator, and many of the records by the bands I mentioned earlier feature Pro One sequencer riffery.

I was thus delighted to find that Wave Alchemy had gone the extra mile and also included a sequencer in the Pro II. While it's not quite as immediate as the real Pro One's sequencer, it is way more powerful. There are seven pattern slots, and each pattern can be up to 16 steps long, adjustable by the Length parameter. Notes are entered for each step in a pitch lane, the bottom lane of the three to the right of the page. Initially, I was a bit confused about how to make the sequencer actually play until the manual told me that C8 on your controller keyboard starts the sequencer and B7 stops it. It's also possible to switch patterns on the fly by hitting notes C6 to F#6, a neat function, but there's no live transposing, which I do miss. The Shuffle button isn't about rhythmic swing, it's a randomiser and it's great fun. The sequencer can freewheel or be sync'ed (at various multipliers) to the host's tempo.

Pro II's filter cutoff and resonance controls can also be sequenced using the two lanes above the pitch lane. This function is turned on via a switch marked 'Filter', but is subject to the following warning: because of the authenticity of Wave Alchemy's emulation, it's entirely possible to flick this switch to 'on' and then have the bassiest bumps and toppiest thwips jump out of your monitors. I was startled by this more than once. Again, achieving vintage tones is not a problem here.

I had enormous fun playing Pro II and making my own patches from scratch. I often found myself forgetting I was playing a massive sample bank rather than an actual analogue synth, so Wave Alchemy's approach is to be commended.

I only had one problem in the test time: one particular multi-rack patch insisted on glitching, topping out the CPU beyond a couple of seconds of playing. Running an eight-core Intel Xeon Mac Pro, I was surprised by this. Wave Alchemy were very prompt and helpful, suggesting that it might be a multi-processor threading issue, and assured me that they'd had it running fine on a G5 Mac. This glitching only happened with one multi, and it was when I was trying to play in excess of 140 voices! As soon as I turned Kontakt's CPU protection on, the patch behaved itself.

Although this review has focused on the authenticity of Pro II's sound in terms of its '80s lineage, I have to emphasise that in no way is this a retro preset machine. Whether you want to sound like Tomita or Trolley Snatcha, the Pro II can deliver, via preset diving or building your own sound from the raw oscillators.

With a price of 40 quid, Pro II seems a no-brainer purchase. The time Wave Alchemy have spent in multisampling and constructing patches has created a warm, rich instrument that will take a very long time to explore, let alone exhaust.

There really aren't any other alternatives if you want a soft synth that specifically mimics the Pro One. You could argue that the Pro 52/53 soft synth by NI came close, as it emulated a Prophet 5, but this has been discontinued. There was also the Wine Country soft Pro One, but that required a Creamware card to run. However, there are many fine monosynth plug-ins out there, and with careful tweaking it is possible to create a very close approximation of the classic Pro One sound.

Given its popularity, it's surprising that there aren't more software versions of the Pro One. The Waves Alchemy Pro II does the job admirably and is a wonderful evocation of a classic synth at a good price.