Film trailer/TV composer Dan Graham has created several sound libraries featuring small groups of players from the Liverpool Royal Philharmonic Orchestra. His first offerings — Animato (string and flute effects) and Spiritoso (cello phrases) — proved highly popular with the sample-buying public, and his latest, Luminoso: Live Violin Phrases, continues in the same vein. The library's 15GB of samples utilise Kontakt's NCW format (not Acid WAV, as it says on the cover), and compress down to 6.7GB on your hard drive. 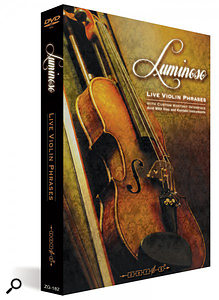 The phrases, played in unison by violinists Martin and Kate Richardson, feature six basic styles: repeated notes, alternating root note and interval, alternating root note and chord, 'Alberti' four-note motifs, 16th-note arpeggios and scalic runs. All phrases are played in every key in straight and triplet time, plus an accented, three-16th-notes grouping, which makes a nice syncopation when played over a 4/4 metre.

Recorded at three dynamics, each pattern has several keyswitchable forms: the intervals range from a minor third to an augmented fifth, while the root note/chord, Alberti and arpeggio phrases contain up to 13 chordal variants, including useful pop staples such as the open fifth, sus4 and sus2. Most impressively, the nine types of scale run include chromatic, whole-tone, 'Eastern' (great for Arabic music), and alternating-semitone/tone versions.

Using the key of C-major as an example, the 16th-note runs ascend C-D-E-F, E-F-G-A and then descend C-B-A-G, A-G-F-E; if you need a straight octave run up, simply play C for one beat followed by a G on the next beat. A cool 'direction' switch makes the second half of each phrase sound first, but unfortunately that control can't be automated via MIDI.

All phrases lock to your host's tempo, loop indefinitely and are simple and adaptable enough to fit most musical settings. The delivery is lively and accurate, the players have a nice rhythmic feel, and the samples achieve the creator's goal of providing "a kind of musical glue” by chugging away in the background, adding cohesive rhythmic energy and a realistic performance dimension to arrangements. A small set of 'Mutated' patches have sound-design potential; some use distortion, which introduces some welcome rock attitude.

Luminoso's 'ensemble size' is user-definable: set the on-screen graphic to 'solo', select the close miking and you'll hear a single, mono violin played in a fairly dry-sounding studio; turn on the room mics, and — bingo! — you now have two unison violins. Increasing the 'player size' will layer up to six different, duo performances of the same pattern, derived from the original six-bar take. To my ears, this bears little or no resemblance to a real-life, 12-piece violin section, but it does thicken the sound and widen the stereo image somewhat, thereby adding a modicum of sonic depth to this musically effective library. Dave Stewart