You don't have to give up Session Drummer 2's content when you move up to 64-bit Sonar X1. 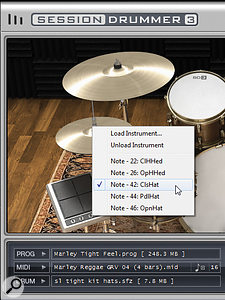 Right-click on a drum in the Drumkit or Mixer page, and you can see the notes that will trigger that particular sound or, in the case of the hi-hat, variations on the sound.

Sonar's Session Drummer soft synth, which combines sounds, patterns and kits, lets you put together drum parts fast. Session Drummer 2 (SD2) was introduced in Sonar 6, while Sonar 8 saw the debut of the 64-bit compatible Session Drummer 3 (SD3). However, SD2 has some programs that SD3 doesn't have, and as a lot of my older projects used SD2, I was curious to see if I could load SD2 programs into SD3. Fortunately, with a little attention to file paths, you can. So whether you want to replace SD2 in your system, get one step closer to total 64-bit compatibility, or take advantage of SD2's extra programs (let's hear it for Hard Rock Room.prog!), here's what to do…

If SD2 isn't already on your computer, you'll need to install it in order to use its programs:

Next, consolidate the appropriate SD2 and SD3 folders so you can access everything from the same place via SD3:

However, although the program files are compatible (including Tune, Width and Pan parameters), SD2 programs will load with incorrect mixer levels. Go to SD3's Mixer page and double-click the Mixer faders to return them to zero. (Also note that the last two percussion channels will be greyed out because SD2 only had 10 channels instead of 12. As soon as you load a sound into these channels, they'll be available.) Return to the Drumkit page, then click on Prog/Save Program so it will load with zero-default mixer levels next time. Of course, you can also customise these levels prior to saving.

When you load an SD2 or SD3 program, it will load the appropriate MIDI patterns, because those are also pointed to by the .prog file. So an SD2 .prog file will point to the MIDI files in SD2's Patterns folder. However, if you want to call up SD2 patterns in SD3, you do not need to navigate to the SD2 Patterns folder, as all of SD2's 'legacy' patterns are also located in SD3's Smart Loops folder under Patterns. When it comes to drum sounds, SD3's Kits folder contains everything that SD2 has as well. The only difference is that you'll find SD2's tambourine sounds in SD3's '9 – Alt Cymbals' folder. So, now we're set: you can load SD2 programs easily from within SD3, which automatically loads all of the SD2 program's associated patterns, drum sounds and kits.

As a final touch, choose Utilities/Cakewalk Plug-In Manager and click on VST Instruments under Plug-in Categories. In the Registered Plug-ins pane, click on Session Drummer 2, then click the Exclude Plug-in button. Now Session Drummer 2 will be removed from your menus, thus reducing clutter a bit. 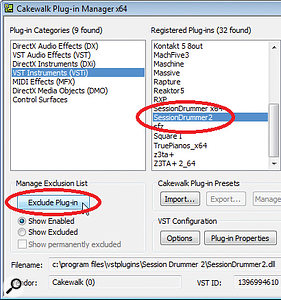 You don't need to have SD2 show up in your plug-in menus any more, so you can exclude it. The program and GUI will still load even if it's excluded from view.

If you load an older project that opens SD2, note which program it uses. Insert SD3, drag the SD2 MIDI file into SD3's MIDI track, load the same program into SD3, then delete SD2.

One of SD3's great features is that you can create your own kits easily, and load individual WAV, AIF, OGG, FLAC or SFZ format files (mono or stereo, eight to 32 bits). SFZ files can define multisampled drum sounds for a pad, as well as trigger sounds for one pad that are assigned to different notes; for example, the hi-hat pad can serve as a 'container' for drum sounds triggered by five different notes (MIDI notes 22, 26, 42, 44, and 46). This allows for open hi-hat, closed hi-hat and pedal hi-hat, for example. You can see the notes to which a pad responds by right-clicking on the pad in the Drumkit or Mixer screen. However, only one of these (the 'audition note') will sound when you hit the pad. The others are triggered via MIDI sequences.

In any event, when you save a custom drum .prog file, it too includes all file-path links, so you want to make sure you've organised everything properly. There are several options. The simplest is to create a folder with all the drum sounds (and SFZ files, if appropriate) used in a single kit; after creating it, you can save the kit file in this dedicated folder and load it whenever you want this specific kit.

Go With The Flow

A more complex option, but one which will serve you better in the long run, is to follow the protocol Sonar has already set up. For example, let's imagine you want to create a kit based on Emu's ancient Drumulator drum machine.

The Kits folder has 12 folders for drum sounds that correspond to the SD3's 12 pads. Each of these contains a folder full of the samples for a particular drum, along with any SFZ files that relate to these samples. For example, in the '3 – Hats' folder, you would create a sub-folder called something like 'Emu_EmulatorHats', which would contain the Emulator's open and closed hi-hat samples. The '3 – Hats' folder would also contain the SFZ file that defines how these two hats are triggered.

Note that even if there's only one drum sample for a pad, it still goes inside a folder. For example, the '1 — Bass Drums' folder would have a folder called 'Emu_EmulatorKick', which would contain the Emulator's single kick-drum sample. Also, you would still want to create an SFZ file, because the kick pad can be triggered by one of two notes (35 or 36). You'd want to make sure that if either note triggered this pad, it would trigger the drum sample.

After you've loaded all your individual drum sounds or SFZ files in the SD3 pads, save it as a Kit to the Kits folder. Cakewalk identifies each kit with a prefix — for example, SS if it's a Steven Slate kit — so I might name my custom kit 'CA – Drumulator.kit'.

Organising sounds as you create them does take some effort, but the advantage is that if you want to mix and match drums from different kits, you'll know that the kick sound you want is somewhere in the '1 – Bass Drums' folder, and you can just scan down the SFZ files (or open the folders containing samples, if you just want a single sample) and find the sound you want. On the other hand, if you simply want to load a complete kit, you don't have to drill down any further than the Kits folder, where you'll see the individual kits available for loading.