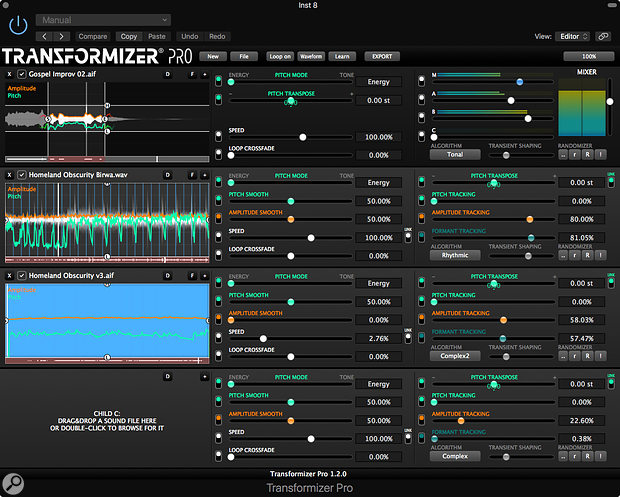 From the Danish developers of the same name, Transformizer is designed to perform a kind of sonic alchemy, analysing the characteristics of a ‘Master sound’, before imposing some or all of those characteristics onto between one and three of what are referred to as ‘Child sounds’. The analysis is fairly rapid, but takes place offline — so you might reasonably ask why Transformizer is a plug-in and not a stand-alone application. We’re told that the main reason is to allow it to be able to send outputs to four separate DAW tracks, and to enable real-time parameter adjustment using MIDI — which is why Transformizer instantiates as an instrument rather than as an effect within your DAW. When the DAW is playing, Transformizer plays along — and, in Pro Tools, does so in sync with the cursor. In Logic Pro, starting and stopping the transport starts and stops Transformizer regardless of where the cursor is in the song.

Audio files can be dragged directly into the Transformizer window from the file browser in the DAW, Mac OS Finder or Windows Explorer, but not directly from DAW tracks. Although a Transformizer setup can be saved as part of a project in the manner of other plug-ins, I found it more useful to generate the modified sound files and then render them to audio tracks within the project, not least because Transformizer takes a hefty chunk of CPU capacity — so much so that it sometimes overloaded a processor core on my 2012 Mac Pro tower. Doing an offline bounce to capture the new file side-steps the overload problem.

The scalable window hosts four rectangular sections, one for the Master sound file and three for the Child sound files. When you drag in a file, you have the option of having it analysed as being Tonal, Rhythmic or Complex. You can then set start and stop/loop markers, engage high- and low-pass filtering by dragging horizontal bars in the waveform display, and adjust the various faders that control what aspects of the Master sound are imposed onto each Child sound. There are separate Master and Child section faders for Pitch Mode, which goes from Energy to Tone (Energy focuses on timing while Tone leans towards tonal content), Pitch Smooth, which smooths out the effect of any pitch changes, Amplitude Smooth, which smooths out level changes, Speed, which adjust the playback speed, and Loop Crossfade.

Each Child section also has faders for Pitch Transpose, Pitch Tracking, Amplitude Tracking and Formant Tracking to set the strength of each parameter as it relates to the Master audio file. Once you have tweaked each of the Child settings to produce something you like, the Master and three Child sounds can be balanced in level using a simple mixer before being bounced to a new file using the Export button.

During the course of this review, Transformizer was updated to v1.2, with several new features including an internal automation system. It is now possible to zoom in on a dedicated part of the overall Transformizer Pro window using the first four numeric keys or a new, dedicated view key, and a new Randomizer function offers three levels of constraint: 10 percent, 20 percent or total randomisation of all randomisable parameters. The user may also select exactly which parameters within each section are to be randomised. Automation data may be used to control any of the relevant parameters in the waveform window, allowing the creation of more dynamically changing sounds.

The manufacturers would be the first to admit that what comes out after processing can often be surprising, but the controls are fairly simple so it doesn’t take long to figure out what Transformizer can and can’t do. It doesn’t do the smooth kind of sound shaping that you might expect from morphing or convolution, but it can still produce very musical results, depending very much on the choice of input material, the analysis mode, and how strongly the attributes of the Master are imposed onto the Child sound.

There are obvious movie sound-design applications such as combining the sound of an angle grinder, a chainsaw and a rotary mower to produce some kind of alien machinery or starship drive motor, but I’ve also had success from treating a rhythmic piano part as the master and using that to impose a rhythmic and timbral character onto a sustained pad-like sound. The final sounds always have a resynthesized quality that varies according to the type of analysis mode you select, and it seems that if you want halfway predictable results from the pitch tracking, the Master sound must be monophonic. Even then, if you overdo the pitch-tracking you can end up feeling seasick, but just occasionally something quite wonderful and totally unexpected turns up. Combining sounds to create complex drones is a doddle, and although sometimes the result might not be what you expect, at other times it might be a real gem.

If you’re into recording singer/songwriter type material, I can almost guarantee that Transformizer won’t appeal to you, but if you have a more experimental bent and need to create interesting evolving drones, pulsing rhythms or downright ugly sonic interludes, it has much to commend it. EDM and ambient music producers will really get it, and for sci-fi video sound effects creation, it is a gift.

I haven’t come across anything else that works quite this way, though there’s a small degree of overlap with things like iZotope’s Iris, and with vocoders and ring modulators. Flux’s IRCAM Tools Trax Transformer also offers a way to impose the characteristics of one sound onto another.

Transformizer Pro is a powerful sound-mangling tool with applications that include EDM and other electronic styles as well as movie sound design. Be warned, though, that the results aren’t always conventionally musical!