The more extreme forms of heavy metal might not be to everyone's taste, but if you are a busy media composer, you never quite know when someone is going to demand a three-minute niche genre track by yesterday. If the required niche happens to be thrash metal, Ueberschall's Elastik library of the same name might be just what you need to meet the deadline. Like the majority of the Elastik series, this library is organised into construction kits (10 in this case) and the 1.9GB of data are spread over nearly 1000 samples in total. 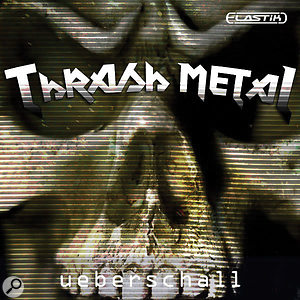 As might be expected, given the genre, the sampled instruments are dominated by drums, electric bass and heavy guitars. Thrash tends to be up-tempo and these kits were recorded at tempos between 150 and 190 bpm. Both the sounds and the playing seem to be spot-on for the style. There's plenty of double kick amongst the drums, and the kick sounds themselves are tight, with lots of click, while the snares are crisp. The bass guitar sounds are solid but with enough top end to cut through, and the guitars, while definitely overdriven and distorted, retain enough definition to ensure that the rapid-fire riffing doesn't just disintegrate into a wall of noise. Given the tempos played and how busy the instrumentation can be, one of the key elements of thrash metal is the almost metronomic timing required in the performances to keep everything tight. Thankfully, that's achieved here.

Each construction kit provides plenty of options, including sections suitable for intros, endings and between three and five other song sections, so it is fairly easy to build a complete arrangement. Within each song section, as well as a pre-mixed drum loop, you get individual drum mics from the same performance — kick, snare top and bottom, hi-hat, toms, cymbals, overhead and room — so it is also easy to create your own drum mix. There is even a snare trigger track if you want to replace or layer new snare samples into the mix. Most of the song sections include a single bass guitar loop and at least a couple of rhythm guitar parts. Additional lead and/or melody guitars are included in places.

In terms of musical style, the kits themselves have a fairly contemporary sound; more Metallica, Slayer or Sepultura than Anthrax or Venom, and there is even some stuff that could easily pass for the heavier end of bands like Alter Bridge (heavy rock rather than Thrash). While this is a bit of a greedy request, it would have been an excellent extra touch to include DI versions of the main rhythm-guitar performances, so they could be re-amped in your DAW if you wanted to tailor your own guitar tones — but maybe that could come in TM2? Nevertheless, if you need some thrash in your sample-library arsenal, this delivers full force. John Walden