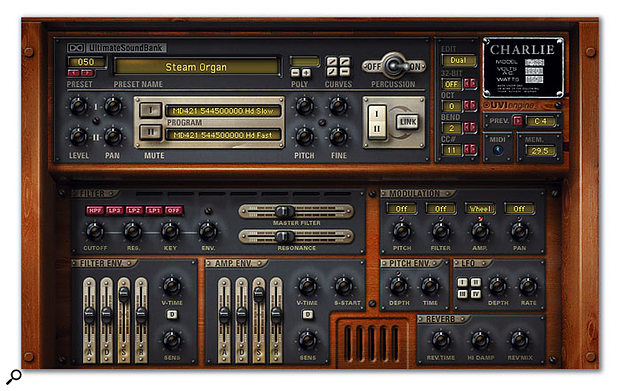 Sampled tonewheel organ sounds have been around for many years, but more recently, we've seen the arrival of modelled virtual tonewheel organs. Can a sample-based Hammond emulation still cut it?

Ultimate Sound Bank's Charlie is the product of a considerable amount of work by Sound Engineer Stephane Briand and Sound Designer Geoffroy Soulaine. Utilising a studio full of the most desirable equipment, they have produced over 12,500 organ samples, taking in a wide array of microphones, guitar amps, rotary speaker, preamps, compressors, DI boxes and A-D converters. All this to arrive at a sample set that aims to be as painstakingly pure, 'authentic', warm or coloured as might be desired. This is no mean feat, but do the ends justify the means?

The downside to sampling is that the captured tone is, by definition, a snapshot. So Charlie 's basic tones are fixed — there are no virtual drawbars here, such as you find on modelled organ simulations like Native Instruments' B4. USB make no bones about this in the manual, feeling that the decision to use samples is justified by the quality and authenticity of the results using their sample set.

The result is a library of around 3GB of sampled material with which to assault your hard drive. Yes, this is going to eat up a lot of your disk space. I cringed as I watched the installation process eat up whole swathes of my recording time!

On a PC you will need a VST 2-compatible host, whilst Charlie will run under Mac OS 9 as a VST 2 plug-in and under Mac OS X (10.2.3 or higher) as a VST 2, RTAS, AU or MAS instrument. The documentation goes out of its way to warn specifically that Charlie will not run as an RTAS plug-in within Digital Performer when running in DAE mode with Pro Tools hardware. For the purposes of this review, I installed the plug-in on my studio PC and ran it as a VST instrument under Cubase SX v2.

Installation was simply a case of manually copying files from the supplied DVD-ROM into my chosen VST plug-in folder. An automated method would have been slicker, but I doubt anyone should have any real problems here. Although Charlie arrives as an instrument in its own right, its presets can apparently also be called up into MOTU's Mach Five universal sampler, which would provide a wide array of additional sound-processing capability. Unfortunately, I didn't have a copy of Mach Five to check out this aspect.

Authorisation is by way of a challenge/response system, which is as good a protection method as any. USB's web site seemed to be down for a couple of days when I first attempted to register, but I was able to make use of the 15-day grace period to keep using it. Once I gained access to the web-registration page, it was all fairly painless, though it did take me a while to discover the difference between a serial number (which was alphabetical in my case) and challenge code (which was numerical)...

On first glance, I quite liked Charlie 's darkly retro interface, though it did make reading some of the text quite difficult, on my monitor at least. Presets can be chosen numerically, or from a drop-down list. Charlie does not have the ability to respond to external patch change requests, either over MIDI or from the host program. Although USB justify this by mentioning the amount of time it takes to load sample material into RAM, and I do have some sympathy with this, I'm not wholly convinced; I would have liked to be able to call up presets from the main Cubase SX arrange page without having to open up the plug-in each time. On my PC, at least, the loading time seemed fairly quick, never taking more than five or six seconds before I was able to play the selected patch.

Charlie is not multitimbral, but it does have the ability to layer two organ Programs, each of which can then be edited, muted, tuned, mixed and panned to taste. Layers can be edited individually, or you can link them, whereupon all edits you perform are applied simultaneously to both layers. A Program provides the basic tone of the organ, after which each is passed into the sound-shaping tools. Samples may be loaded in 16 or 32-bit formats — there is a RAM/processor power trade-off here, but USB give you the option to optimise usage depending on your particular circumstances.

Overall controls are included to determine velocity curve (switched off in the majority of presets, which is just as it should be in my book!), pitch-bend range, polyphony (a processor-saving feature), and octave shift. A toggle switch brings in the percussion feature. It would be nice to have had a level control for percussion — and percussion works polyphonically, which may have some Hammond purists hot under the collar.

Given USB's take on authenticity and purity, I was initially surprised to see the inclusion of such a powerful resonant multi-mode filter. There are three low-pass modes, with varying degrees of strength, and a single high-pass mode. Cutoff can be modulated by key-tracking, or by positive/negative amounts by a dedicated filter envelope of the ADSR variety. A second 'master filter' allows for simple low-pass or high-pass filtration, also with a resonance control. None of the filters here fill me with awe, sounding somewhat 'lumpy' as they cross resonant peaks, but they do the job adequately for the job in hand.

Both the filter and amp envelopes can respond to MIDI velocity to increase amplitude or filter cutoff. The decay or attack can also be modified by velocity times — it is not possible to have decay and attack both set to respond to velocity. There's also a simple depth/time pitch envelope, which adds a quirky twist to proceedings — I liked it a lot!

Last in the chain is a simple reverberation processor with time, damping and mix controls. This sounds good — too good, actually, if you expect to hear an authentically 'boingy' Hammond spring reverb!

Most of Charlie 's controls are assigned a MIDI controller number and it would be a simple job to create a mapping on your favourite controller surface to accommodate it. It's a shame, however, that the controller numbers themselves cannot be set by the user.

There is no provision for adding key-click, but there is a control to shift the sample start point. To be fair, USB don't attempt to equate the two, but after seeing no click control I was hoping this would act as a reasonable substitute. I didn't find it particularly helpful in this respect, simply hearing a nasty, hard click at various settings, rather than the pleasing 'chiff' of a real Hammond.

Should computer power become a problem, Charlie 's maximum polyphony can be limited and USB also give a whole host of details on saving more processor power by making careful choices when you create your Presets.

There is nothing at all wrong with the overall sound that Charlie produces; it all seems gritty and life-like enough. But there are a few things lacking. I miss key-click; for me that is half the joy of the Hammond sound, although others may not agree. I noticed that some of the samples did exhibit some click, but this was not altogether appealing, since their neighbours on the very next key did not! I was quite enjoying the 'Lord Full' patch until I hit a bottom 'C', followed by a bottom 'D'... from loud key-click to no key-click at all! From that point onwards, I couldn't help hearing it each time I ran down the keys. Where Charlie wins in overall tone, it unfortunately loses in some of these details.

I also dislike the crossfade from slow to fast rotary speaker settings; I have never liked this aspect of sampled Hammond emulations, and Charlie is no exception — it feels clumsy and sounds totally unconvincing. I'm also unhappy about multisamples of distorted Hammond tones. The beauty of a distorted Hammond lies in the interaction between the notes being played as they are mangled together by the distortion — here each note distorts in glorious isolation of any others being played. You could always add a distortion effect in the signal chain, but this is something I would have liked to see USB tackle before the sounds leave their VST instrument.

I'm something of a Hammond freak, so I always feel a Pavlovian response coming on whenever I get the chance to play one. Due to space constraints in my studio, my own Hammond T-series organ has to suffice for me, but I still hanker after the full-blooded power of a C3/B3 from time to time. Until now, Native Instruments have satisfied that urge with their B4 emulation, for which I have nothing but praise. Whether it stands up at the side of the real thing is a moot point, but it certainly does the job for me. Charlie, with its use of real samples and attention to detail should, therefore, hit a similar spot. But, for me, it doesn't quite cut it.

With an instrument as revered as the tonewheel organ, any manufacturer daring to tackle an emulation is always going to have a tough time of it. Comparisons are immediately available and any 'difference' will inevitably be seen as a 'failing'. Charlie is a fine-sounding instrument and in a mix will doubtless produce results indistinguishable from the 'real thing', but I feel it is slightly let down in a couple of key areas, most notably key-click, rotary-speaker emulation and distortion. These are areas where modelling might well have been able to help.

But credit to USB where it is due. The collection of sounds here is very good indeed, the presets sound great straight out of the box, and the editing facilities are excellent. The price also seems fair when you consider the work that has gone into this product and the trouble that it could save you. Anyone looking for a collection of instant Hammond sounds will find Charlie a useful addition to their armoury, but anyone looking for true playable authenticity may well be a little disappointed with some of the performance aspects.

As a collection of 'wash-and-go' organ sounds, this will do the job admirably, providing my cons list doesn't overly concern you. Whereas sampling has the edge in capturing the basic tone of an organ, I believe modelling has the advantage in editability and the overall consistency of the sounds it produces.