Given the ‘Arps’ title, you might be forgiven for thinking Umlaut Audio’s Kontakt-based sample library/virtual instrument is all about synth sounds for EDM styles. As it happens, you would be wrong. Don’t be disappointed though, because tucked away behind the unassuming title is a sample-based drum instrument that manages to deliver something rather special. 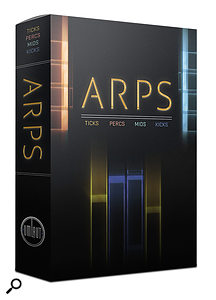 Arps contains four Kontakt patches — Kicks, Mids, Ticks and Percs — each built from a fairly humble set of drum sounds with a different sound mapped to each MIDI note. The Kicks and Perc patches are perhaps self-explanatory, but Mids features snares and toms while Ticks is all sorts of interesting, more mid/high frequency-based sounds including hi-hats, woodblocks and various other objects being struck.

Aside from being colour-coded, the four patches provide identical sets of controls. Bypass the arp and effects sections and the raw samples themselves are nothing to write home about. However, the magic of Arps is in what the combination of the step-based pattern/arpeggiator and the effects section does to these rather humble sound sources. The Step Sequencer provides patterns up to 32 steps in length with variable volume per step. This allows you to create your basic rhythm. However, when you then hold down a note or two (or more), the arpeggiator settings — Arp, Steps, Mode, Rate, Swing, Octave, Release and Repeat — then get applied to the step pattern and, just as with a synth-based arpeggiator, you get a rhythmic pattern of sound. Except, of course, in this case, it’s a rhythmic pattern of drum sounds.

You get seven effects — Filter, Distortion, Lo-Fi, Transient, Compressor, Delay and Spatializer — and these, alongside pitch-shifting in the arp section, transform those originally humble drum samples to a completely different level. The Filter offers simple cutoff and resonance controls, but also multiple filter types. This is particularly effective at modifying the sounds. Equally, the Delay can be used to add tempo-sync’ed repeats (try a triplet setting and things can get seriously groovy). Shift your note selection and, because this then triggers different individual samples, your rhythm instantly takes on a different character. Layer multiple Arps instruments — Kicks, Mids, Ticks and Percs — and there are some seriously creative options for any producer looking for inspiring hi-tech rhythms, whether they be simple and hypnotic or straying into complex polyrhythm territory. I’d have loved to see a modulation option included, but you can, of course, automate all the controls from within your DAW/sequencer and the individual effects can be toggled on and off via keyswitches.

At just $99, and capable of running in the free Kontakt Player as well as the full version of Kontakt, the basic building blocks — simple samples, a basic arpeggiator and some multi-effects — might not look so special on paper. However, Arps is most definitely a case of the whole being significantly greater than the sum of the parts. Easy to use, compact, sensibly priced, and rhythmically inspiring, Arps is a bit of a gem.

Umlaut Audio’s second offering, Pads, brings a very similar approach to pad and soundscape creation, as found on some of Sample Logic’s high-end Kontakt libraries such as Cinematic Guitars or Morphestra 2. However, Pads does it in a somewhat more compact (in size, features and price) format, in that it allows you to blend together two samples (as opposed to eight in these Sample Logic titles) from its library, modulate a number of parameters for each sound source (including some rather interesting filter options) and then apply a range of effects to generate the final sound. All these elements are accessed from a single Kontakt patch via a dedicated front-end that includes a good selection of presets and also allows you to browse the individual source samples that can be loaded into the Layer 1 and Layer 2 slots.

The upper portion of the interface can be switched between two pages. The Mix page allows you to configure the sounds used in each layer, set their respective levels, pan, attack, release, filter cutoff, filter resonance, tuning and, from a good number of options that mimic some well-known ‘real’ filters, filter type. This page also includes a Rand button if you’re looking for a bit of inspiration and just want to see if you can get lucky. The second page — the Mod page — provides three modulation systems, each of which can be switched between LFO, envelope or pattern-based modulators. Each of these can also have a modulation target set from some obvious candidates. Beneath the Mix/Mod section is the Effects panel with EQ, modulation, delay, reverb, lo-fi, distortion and tape saturation effects.

OK, so the 5GB sample library doesn’t perhaps match some of the other libraries mentioned earlier, and we are just blending two sounds rather than eight to create our pads and sounds but, equally, Pads isn’t quite such a resource hog, has a super-easy interface, is priced at a more accessible level and will run with the free Kontakt Player as well as the full version of Kontakt. And, as it happens, you can actually conjure a huge range of sounds from it once you master the control set. Yes, it is very much in the ‘pad meets soundscape meets drone’ genre, but there are both suitably beautiful and suitably menacing tones to be found. In addition, if you add in some filter modulation via the step sequence modulator, then rhythmic sounds — drones with a beat to them — are also possible and the filters can get dramatic enough if you do want something less subtle.

At $149, Pads is perhaps still not in the ‘casual purchase’ category for the hobbyist, but it would certainly make a useful addition for many working media composers, whether that’s because they are on a tight budget or they just want another alternative tool to turn to on occasion. It is also a doddle to use.