The Apollo Twin brings impressive sound quality and UA plug-ins to the desktop, along with unusually versatile mic preamps!

The latest addition to Universal Audio's growing Apollo family is a desktop audio interface which incorporates their UAD2 Powered Plug-ins platform. As with the larger Apollo and Apollo 16, this makes it possible not only to use UA plug-ins at mixdown, but to employ them in the monitor or record path with very low latency. The Apollo Twin is available in Solo or Duo configurations, the latter offering twice the DSP grunt of the former. While its rackmounting siblings can mate with the host computer using Firewire 800 or Thunderbolt, the Apollo Twin is Thunderbolt-only, and is currently compatible only with machines running Mac OS. 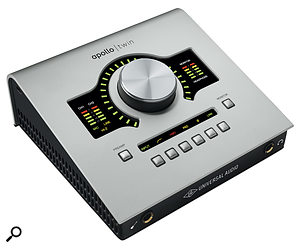 Housed in a very smart metal case, the Apollo Twin has the look and feel of a quality product. Around six inches square, it's larger and heavier than most of the other desktop interfaces I've encountered, but still merits the tag 'portable'. Compared with RME's Babyface or MOTU's Track 16, the Twin has the great advantage that all its I/O is built into the unit itself, rather than delegated to an awkward flying cable. In other respects, though, its basic design shares many ideas with those products. Apart from the headphone socket and a high-impedance jack input for connecting electric guitars, all the socketry resides on the back panel, while the top is dominated by a large, multi-function rotary controller with associated buttons and LED meters.

Said rear panel sports two combination jack/XLR sockets which can accept mic- or line-level signals, plus two pairs of TRS jacks providing Monitor and Line outputs. These show up as independent outputs to your DAW software, as does the headphone output. The Monitor outs also feature digitally controlled analogue attenuation, allowing the monitor level to be adjusted without compromising audio resolution. A single optical socket can be configured to accept a stereo S/PDIF input, or up to eight channels of 24-bit digital audio in ADAT format, depending on sample rate.

The Apollo Twin apparently uses the same circuitry as the original Apollo, and Universal Audio claim that this makes it the best-sounding desktop interface on the market. Their published specifications more than bear out this claim: the dynamic range of both the mic inputs and line outputs, for example, is quoted at a most impressive 118dB. In theory, Thunderbolt can supply up to 9.9 Watts of bus power at up to 18V — considerably more than USB — but even this isn't enough to deliver the requisite level of audio performance, as the Apollo Twin requires its own DC power adaptor. The supplied PSU is a black plastic affair which lets down the appearance of the system a bit, but at least attaches using a locking connector to prevent accidental disconnection. However, I can't let pass without comment the fact that no Thunderbolt cable is supplied. In a unit costing over £700$700 or more, this is disappointing.

Like the other Apollos, the Twin needs to be registered to a UA account before it can be used. Once installed, its functionality is accessed through UA's now-familiar Console and UAD Meter & Control Panel utilities. The former allows you to set up cue mixes and apply UAD plug-ins in real time to your input signals, with minimal latency, while the latter handles configuration functions such as buffer sizes, sample rates and plug-in activation. Both of these utilities were covered in depth in our reviews of the Apollo (June 2012: /sos/jun12/articles/universal-audio-apollo.htm) and Apollo 16 (October 2013: /sos/oct13/articles/apollo-16.htm), so I'll refer readers to those articles rather than describe them in detail here.

The Apollo Twin's single pair of analogue inputs are augmented by an optical socket which can accept either stereo S/PDIF or eight-channel ADAT-format digital input.

The Twin's controls duplicate those found on the front of the original Apollo, except that there is only one large rotary controller; Preamp and Monitor buttons switch its function to adjust either input gain, or monitor or headphone level. The row of six buttons beneath the encoder correspond to their counterparts in the preamp section of the Console, setting mic or line input, high-pass filter, phantom power and pad on/off, polarity reversal and stereo linking.

Since we reviewed the Apollo and Apollo 16, there has been one very important development relating to the console: the introduction of a technology UA call Unison, which allows their plug-ins not only to process the signal after it has been captured and converted to digital, but also to adjust the input impedance and "gain staging response” of the microphone preamps. As with Focusrite's Liquid technology, the aim is to mimic the behaviour, and hence the sound, of classic mic preamps — though UA employ circuit modelling in place of Focusrite's dynamic convolution technology. Although Unison was not enabled when the original Apollo was released, it has always been designed into the digitally controlled preamps, and is now supported there as well as on the Twin.

I asked UA what they meant by saying that the plug-ins change the "gain staging response” of the hardware. It turns out that whereas the Apollo preamps are capable of exerting up to 65dB gain prior to A-D conversion, UA's modelled plug-ins also apply gain in the digital domain, and thus present a correspondingly lower gain range in the analogue domain. In theory, of course, this leaves the upper end of the A-D converter's dynamic range unused and hence reduces the dynamic range and signal-to-noise ratio of the inputs, but as long as enough is left to capture the dynamic range of the original preamp being modelled, this is not a problem in practice. UA's Dr. Dave Berners explained: "In order to be able to drive the hardware preamp model into virtual saturation, part of the physical A-D headroom must be preserved above the saturation point of the model. It does reduce range some, but allows us to drive emulations into saturation without converter clipping. The noise has never been worse than the target model.”

From the user's point of view, Unison manifests itself as a new plug-in slot at the top of each Console mic input channel, beneath the existing preamp controls. By default, nothing is loaded into this slot, and any preamplification you employ is as clean and transparent as UA can make it (which is to say that it is very clean and transparent indeed). Should you want to add some colour to your input signal, there are currently three plug-ins in the UAD collection that are Unison-enabled, meaning that they can be installed in this slot. These are the API Vision Channel Strip, as reviewed by Paul White in March's issue (/sos/mar14/articles/api-vision.htm), and two plug-ins emulating old (A) and new (B) variants of Universal Audio's own 610 console valve preamp. You're not restricted to using these in the preamp plug-in slot, so they can be applied at mixdown in your DAW if you prefer, but of course you won't then be able to take advantage of the way they can change the interaction between mic and preamp.

Showing off UA's new Unison technology are emulations of the old and new variants of their 610 valve preamp.

In my experience, the only way to get a good preamp to colour the sound is to drive it quite hard. Unless your preamp has an output attenuator, this can be difficult to achieve in digital recording systems, as the overdriven preamp's output signal will simply be too hot for an A-D converter to cope with. Not so with UA's Unison-enabled preamps, all of which have multiple gain stages. In the case of both 610 emulations, these allow you to apply everything from barely noticeable warmth to brutal 'Revolution'-style fuzz. Depending on the source, in fact, they can require careful setting up to avoid outright distortion, and juggling the various gain controls on the 610B in particular can be a bit of a balancing act. The 610B is also the only one of the three that has switchable input impedance, which makes a noticeable difference to the tone of some mics and very little to others. Inserting a plug-in in one of the preamp slots in the Console adds a millisecond or so of latency to the system, though the round-trip delay remains very small. Activating or bypassing a plug-in in one of the preamp slots also sends quite a loud pop through the mixer.

When you manage to find the gain-staging 'sweet spot' of one of the Unison plug-ins, though, its contribution to the sound is unarguable. I was particularly impressed by a scratch vocal I tracked using a humble Shure Beta 57 through the 610A plug-in, which imparted a smooth, thick saturation to the mid-range that really helped it cut through the mix. I also liked the effect of cranking up the input gain on the API Vision channel, which can do a lot to add balls to a wimpy source. Because they change the way the gain settings behave, it's not straightforward to compare directly the effect of using these plug-ins in the 'preamp' slots with the sound they give when employed as conventional plug-ins on cleanly recorded material, but the plug-ins sound good in the latter role too.

These are promising beginnings for the Unison technology, then, and the 610 emulations certainly demonstrate what preamp modelling is capable of. At the same time, though, their tendency towards heavy coloration means they are not exactly versatile. That thick, slightly dark, saturated tone is perfect for some retro rock and pop styles, but perhaps less useful in mainstream, modern-sounding productions. Given that UA already make licensed plug-in emulations of channel strips and desk EQs from the likes of Neve, SSL, Helios and Trident, it is to be hoped that Unison-enabled versions of these, with preamp modelling, will make an appearance soon.

All in all, I'm impressed with the Apollo Twin. To have matched the technical specifications of the original Apollo in such a compact device is no mean feat, and I can't argue with UA's claim that this is currently the best-sounding desktop interface on the market. (From the point of view of published specifications, the only rival that comes close is the Prism Sound Lyra, which has yet to arrive at SOS Towers for review.) The Twin is simplicity itself to use, and the top-panel controls do everything they need to do with a minimum of fuss. The meter LEDs are clear and bright, and the digital input means you can easily add an ADAT-format multi-channel preamp for occasions where you need to track drums and so forth. There are, of course, circumstances where a second headphone amp or an additional pair of line inputs would be handy, but the Twin's existing feature set is well suited for its intended role.

The double whammy of excellent sound quality and UA plug-ins in a desktop format has obvious appeal, and I can imagine that many existing UAD or Apollo owners would be interested in adding a Twin to their setup for portable duties or to act as a high-quality monitor controller and headphone amp. By the time you read this, an update to the UAD software should enable the Twin to coexist with PCIe and Firewire UAD2 units, and for the Twin software to be installed on the same machine as the Apollo software. For Mac users to whom portability and excellent sound quality are more important than having a lot of I/O, the Apollo Twin sets a benchmark that will be difficult to beat, and I shall be sorry to give it back!

The Apollo Twin is a well-thought-out portable interface that is a pleasure to use. It offers uncompromising audio quality and access to UA's excellent library of Powered Plug-ins, along with the intriguing possibilities of the new Unison preamp modelling.