There are lots of strange noises you can make with acoustic instruments beyond playing them normally, and Ultimate Sound Bank (USB) have collaborated with highly‑regarded French research department IRCAM in an apparent quest to sample them all! This library contains the fruits of their labours, a mind‑boggling range of avant‑garde performance techniques for 16 solo instruments, comprising five woodwind, four brass, four string instruments, guitar, harp and accordion — did I mention that IRCAM were French? 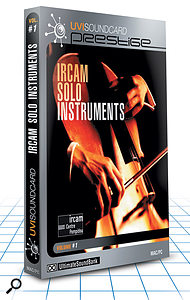 The multisamples are bundled with USB's UVI Workstation virtual multitimbral sampler, which delivers pretty decent synthesis and effects facilities roughly along the lines of those in their Plug Sound Pro (reviewed in SOS June 2007). The sounds are also compatible with MOTU's MachFive2. If I tried to enumerate all the different performance styles for each instrument, we'd be here all day, so I'll leave you to check out the full details on USB's web site, while I survey the big picture.

You get loads of totally way‑out noises, as you'd expect, but what I really liked was that they all sound very organic, because individual notes have a bit of grain and waver to them that lets you know you're hearing real players (players of very high calibre, in fact). Semitone and wholetone trills are available for most instruments, as well as volume swells, and there are key‑switched patches that provide access to several different performance techniques at once.

Transitions are available between many of the more common performance styles; for example, allowing a single flute‑note to become flutter‑tongued halfway though. Other transitions include volume swells and the odd long chromatic scale. Another great feature for the string instruments is that there are special patches that restrict notes to a single string, so you can take advantage of the darker timbres to be found as the left hand creeps up the fingerboard.

What's not to like, then? My main criticism is that this library is much more evocative than it is expressive — by which I mean that any individual note you play has lots of character, but you'll have to work hard to link those notes together into a truly musical‑sounding phrase. This is primarily because, for all its avant‑garde content, the multisampling seems rather out of touch with the state of the art. Velocity and keygroup boundaries are often painfully apparent, note ranges sometimes feel rather narrow, and there are none of the now fairly commonplace scripting niceties for implementing legato phrasing or avoiding the machine‑gunning of repeated notes. Most annoying of all, there are no looped sustains or release‑triggered samples, so all notes peter out after a fixed (and sometimes surprisingly short) time, like a mellotron, and the few short‑note patches scattered around are no real consolation.

I felt that some of the sounds (such as the cello and trombone) sounded like they'd been miked a bit too close, and there's only a single mic and miking position per instrument, so you can't change this. Also, given the presence of a harp, it would have been nice to have prepared piano too — maybe they felt that would have been selling out!

Summing up, then, the main reason to get this library is for its phenomenal range of effects and atmospherics, whether you're writing pioneering new compositions, programming scary media music, or just wanting raw materials for some great organic pad sounds. It won't cover your bread‑and‑butter solo‑instrument needs (unless your music sounds like the glacial noodlings of USB's craftily flattering web audio demos), but there's no shortage of other libraries offering more nuanced middle‑of‑the‑road performances. Mike Senior