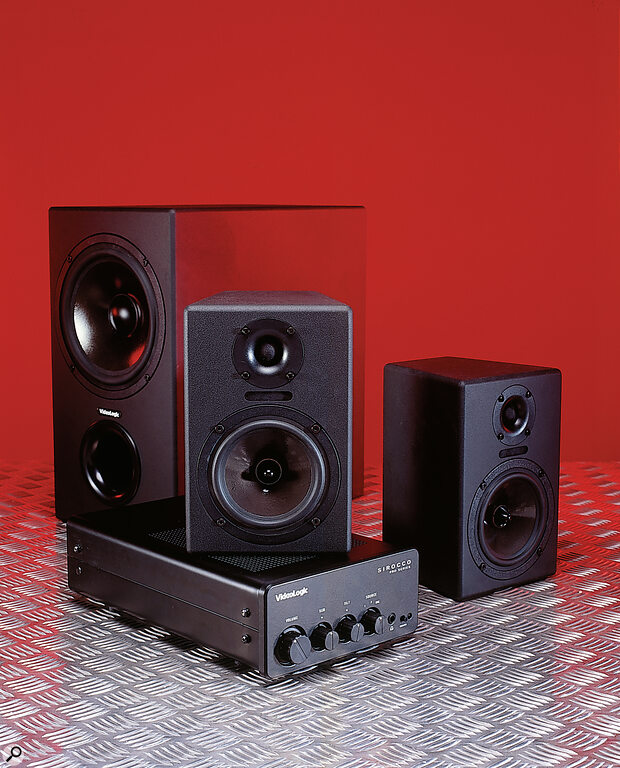 Active monitor systems which use a subwoofer together with satellite speakers are not particularly unusual in this industry, but the Sirocco Pro from Videologic is sure to stir things up by providing a neat package, with impressive technology, at under £600. Hugh Robjohns tunes in...

Videologic Systems, a division of the Imagination Technologies Group, produces a range of computer peripherals generally based on technologies developed by other divisions in the group. Amongst the company's numerous products are various 3D graphics devices (such as that at the heart of the Sega Dreamcast), sound acceleration cards, and a range of digital theatre and loudspeaker systems mostly aimed at the home‑computer market.

The company has received a great deal of praise recently in the computer and hi‑fi press regarding the audio quality and sheer value for money of its 'Sirocco' powered loudspeakers — a satellite‑plus‑subwoofer system which has earned them a 'Millennium Product' award from the government. Although the original Sirocco system was built to meet a price suitable for the home multimedia marketplace, it manages a significant sonic improvement over the typical monitoring systems available, and at around two hundred pounds it certainly represents good value for money.

However, the new 'Sirocco Pro' reviewed here is a more professional product, aimed at an entirely different market where quality is firmly at the top of the agenda. Although loosely based on the original Siroccos, the new Pros are in a different league, with better drive units, larger enclosures, and significantly enhanced electronics. Despite all these improvements, though, the cost is still under six hundred pounds, and the system includes stereo D‑A converters which support resolutions and sample rates up to 24‑bit and 96kHz. 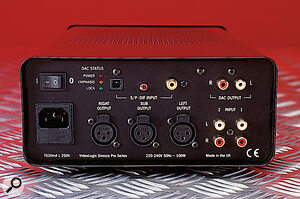 The control unit of the Sirocco Pro system allows speaker system's amplifiers to be fed from a variety sources, both analogue and digital.

Although cosmetically similar to the original Sirocco 'Studio Quality Speaker System', the Sirocco Pros have been completely reworked. The satellite speakers and subwoofer are, in fact, all rather larger than the standard Sirocco units and are fitted with different drive units which provide far greater efficiency and the ability to handle higher SPLs. The supplied amplifier and control box, although using a similar circuit topology to that of the Sirocco, is also larger and better built — there are multiple inputs, a built‑in D‑A converter with separate analogue outputs, an improved power supply, and a higher‑quality amplifier.

The satellite speakers are surprisingly light in weight at just 2.4kg, but the cabinets are solidly constructed of 12mm MDF with a rough‑textured black finish. The cabinet employs an infinite‑baffle design in order to provide better low‑frequency phase integrity, and has non‑parallel sides to minimise vibration modes — it measures roughly 250 x 165 x 170mm (hwd) at the front, tapering to 105mm wide at the rear. The drivers are all manufactured by Audax and include a 135mm bass‑mid unit coupled with a 25mm soft‑dome tweeter. The woofer is a High Definition Aerogel (HDA) design — basically a carbon‑fibre and kevlar cone construction — which is claimed to provide an exceptionally good transient response. The tweeter is a conventional ferrofluid‑cooled unit with a high‑efficiency neodymium magnet.

The two drivers are powered by their own 25‑Watt amplifiers and cross over at 2.7kHz using matched 12dB/octave slopes. Connections between the power amplifier and control unit are handled by cables which are terminated at the speaker end with a 4‑pin XLR and at the amplifier end with a 3‑pin XLR. This arrangement is far more acceptable in professional circles than the simple spring‑clips which are used to connect bare speaker‑lead wires on the original Siroccos.

The subwoofer is based on a reflex enclosure measuring roughly 435 x 245 x 390mm (hwd) with another Audax drive unit, this time a magnetically shielded 200mm HDA loudspeaker. An 80mm flared port is mounted directly below the speaker to the front and, on the review model at least, there appeared to be no acoustic absorber of any kind within the 18mm MDF cabinet. The system is arranged to cross over to the subwoofer below about 126Hz at 12dB/octave (except in 'monitor mode' where all bass is sent to the satellites) and a 3‑pin XLR socket on the control unit provides a termination for its dedicated 50‑Watt amplifier.

The substantial controller weighs in at nearly 4kg — it looks worth every bit of the asking price on its own! The front panel is machined from a solid block of aluminium with recesses for the control knobs and switches, and the whole unit is painted a resilient silk black. Front‑panel controls are provided for the volume of the overall system, the subwoofer's relative level, the frequency 'Tilt', input selection (two analogue inputs plus the output of the internal D‑A), and the 'monitor mode'. There is also a quarter‑inch headphone socket and an amazingly bright blue power LED.

The 'monitor mode' is nothing to do with tape record loops; instead, it mutes the subwoofer amplifier and removes the LF filter from the feeds to the satellite woofers, allowing their range to extend down to around 70Hz. This facility is ostensibly to allow for precise monitoring of the stereo image of low‑frequency signals via the satellite speakers.

The 'Tilt' control skews the frequency spectrum with interdependent shelving filters. These are arranged to raise the bass end with a corresponding depression to the treble (or vice versa) and the maximum swing is of the order of 6dB below 200Hz and above 5kHz, the signal remaining substantially flat through the mid band. Videologic claim the advantage of this technique is that it allows the tonal spectrum to be adjusted whilst maintaining a linear‑phase system.

The rear panel contains an impressive collection of socketry, starting with the ubiquitous IEC mains inlet and fuseholder and an associated power rocker switch. On the right‑hand side, two stereo pairs of gold‑plated phono connectors cater for analogue inputs, and a third pair above provides a buffered output from the internal D‑A converter (0dBDFS equates to 2.2V RMS or +9dBu). The D‑A input is derived from either a co‑axial S/PDIF socket or a Toslink optical connection, as selected via a toggle switch mounted between the two. Rear‑panel LEDs indicate satisfactory data lock, pre‑emphasis, and power to the D‑A circuit card.

The amplifier outputs are presented on three female 3‑pin XLR connectors (female connectors are required to pass the CE regulations regarding exposed power outlets), one for each of the satellite speakers and the third for the subwoofer. It is unclear why Videologic have chosen not to stick with 4‑pin XLRs for the satellite outputs (matching those on the rear of the speakers) but plugging a satellite speaker into the sub feed by mistake will result in the bridged subwoofer amplifier driving the tweeter and bass‑mid driver in series, which is a relatively safe outcome. Plugging the subwoofer into either of the satellite feeds will result in nothing much at all!

Internally, the unit is constructed with high‑quality components on a well‑labelled motherboard which extends across most of the available floor area. Apart from the large 110VA toroidal transformer, everything is mounted on this circuit card, although the D‑A converter is an independent sub‑board installed directly through the rear panel. The D‑A uses mostly surface‑mount devices, but the main board uses conventional components throughout, with single‑chip amplifier modules mounted on modest heat sinks in the centre of the unit. The top and bottom plates of the case are drilled to provide ventilation, the airflow being guided onto the heat sinks by more holes drilled strategically in the main circuit card.

The power‑supply section has been bolstered considerably compared to that of the original Sirocco, with 40,000µF of power supply smoothing to give much 'stiffer' power rails, and the circuit design has been tweaked here and there to realise other performance improvements. The specifications read very well — distortion is quoted as better than 0.01 percent and frequency response as 10Hz to 100kHz, while the D‑A claims a signal‑to‑noise ratio in excess of 110dB.

At this price level, there is very little direct competition to the Sirocco Pro; the closest is probably the active Tannoy Reveal speakers which are listed at the same price and have similar technical specifications (although they don't employ a subwoofer). However, even the Tannoys don't include a natty control unit and a decent 24/96 D‑A! For comparison, the baby Genelec 1029As with their associated 1091 subwoofer are virtually double the price, to which you can add another 30 percent if you want digital inputs!

The Siroccos are certainly not the last word in monitor speakers but, at this price, I'm sure no one would expect them to be. The speaker sounds as if it has a kind of flattened 'W' shape to its response, with a slightly forward mid‑range and gently emphasised frequency extremes.

When in monitor mode the bass end of the satellites sounds reasonably smooth and well extended, given the cabinet size, but introducing the subwoofer adds a lot of weight and solidity along with far greater power‑handling capability. However, the characteristic monotonicity of a vented cabinet is also revealed with plenty of energy and punch, though bass tunes and details tend to be masked by the inherent resonance of the box.

Stereo imaging is first‑rate, as would be expected, and although not the most detailed or neutral of speakers, the Siroccos do manage to convey a lot of energy, attack and enthusiasm. In fact, transients come across very well indeed, though this might perhaps make the sound a little fatiguing during long listening sessions.

The quality of the electronics is very hard to fault, and although the amplifiers are relatively puny in wattage terms they seem up to the task of driving these highly efficient boxes to surprising levels. It would have been nice to have a tape‑output facility for recording the selected monitoring source, but at this price it would be churlish to complain.

I auditioned the D‑A converter separately as well as with the system as a whole. Used in a loop‑through mode with a digital feed direct from a CD player and the buffered analogue outputs conected to my own reference monitor speakers, the D‑A converter performed very well indeed. So well, in fact, that this element alone almost justifies the cost of the Sirocco Pros. From a quality standpoint, I found myself thinking of the system as a versatile D‑A converter with built‑in monitoring, rather than as a monitoring system with built‑in converters! The provision of two further analogue inputs, source selection and basic equalisation makes this a very attractive and stunningly cost‑effective system.

Judging from the Sirocco Pro system, it seems to me that the computer industry builds and markets products with far lower profit margins than the music or hi‑fi industries (hooray!). Consequently, the Sirocco Pros represent superb value for money in terms of the facilities provided and their overall quality, and I hope this product will encourage other music industry manufacturers to reassess their own margins.

In all honesty, I wouldn't recommend using the Sirocco Pro system for mastering your latest album, but as a general‑purpose monitoring setup in a computer recording environment, these speakers would be ideal. Small and convenient, with magnetic shielding, flexible interconnectivity and an acceptable sound quality (albeit towards the bottom end of the professional monitoring market), I can think of nothing else that approaches the value for money available here.

A compact satellite‑plus‑subwoofer system which offers excellent value for money, albeit in the peripherals department rather than in sheer sound quality. The separate amplifier and control unit provides two analogue inputs plus a digital input, the latter accepting 24/96 sources if required.