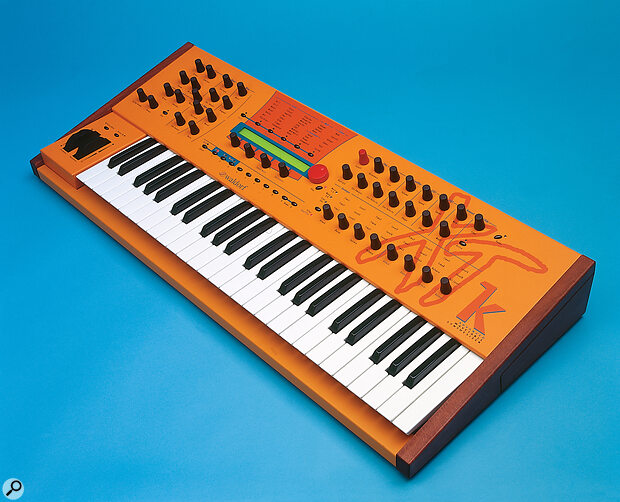 Until now, the only implementation of Waldorf's wavetable synthesis with a built‑in keyboard was their pricey Wave megasynth. Now, however, they've repackaged their more affordable Microwave XT in an attractive keyboard unit.

Wavetable synthesis has its roots in early PPG instruments, and was developed further in the mighty Waldorf Wave and Microwave synthesizers. More recently it has seen service in the all‑digital Microwave II, XT and PC. Now, little more than a year after the release of the XT, comes the first affordable wavetable synth with a built‑in keyboard — the XTk. With its eye‑grabbing paint job and sleek new knobs, is the transformation from perplexing boffin contraption to hip DJ accessory complete? Whether this new look will appeal to the young and trendy, I couldn't possibly forecast, but at least it gives me the opportunity to get my hands on the most portable, giggable Microwave yet.

Not content merely to graft on a keyboard, Waldorf have seized the opportunity to perform yet another overhaul of the Microwave's appearance. The panel layout has been redesigned, the alpha dial has shrunk, and slender, tapering knobs and extra buttons have been added. The whole thing is finished off with a luxurious coat of pale tangerine paint and framed with wooden endcheeks. In my eyes, it's the most stunningly gorgeous synthesizer since the Prophet 5. Having said that, you should be aware that I once owned a brown, hand‑painted Robin Reliant which I (alone) considered beautiful...

The synth measures 32 and a half inches by 13 and a half, is nearly four inches high, and is surprisingly heavy for its size — thanks, no doubt, to its solid metal casing. My only reservation with regard to the construction concerns the feel of the new buttons, which wobble slightly as you press them. The buttons and alpha dial are used to navigate through the pages of edit parameters (that's the darker orange 'matrix' section directly above the display), transpose the keyboard and select patches. In the original XT, patch selection required a spin of the alpha dial. Now, however, a row of 11 buttons are used to call up any of the 256 onboard patches by bank and number — a clear improvement. Pushing the button marked 'Hold' fixes all but the final digit so you can pick patches from a single bank with just one key press each.

The keyboard has a fast, light action with channel aftertouch and attack and release velocity. It seems designed for soloing, which may explain its four‑octave length. I hope this is a sign that manufacturers are willing to break the unwritten rule that every synthesizer isn't complete without a five‑octave keyboard. However, since my crusade for alternative means of control is out of place here, I'll simply say that the XTk's size is very convenient, and that its combination of keyboard and well‑positioned knobs feels just right for playing and tweaking. The transpose buttons extend the range up or down an octave, although this function would have been far friendlier if there were visible indication that transposition had occurred. Perhaps something will be added to the display in a future upgrade?

The rear of the unit features most of Waldorf's name and logo, their bottom halves stylishly falling off the panel. Also not quite making it onto the XTk is a headphone socket. It doesn't seem five minutes since I was moaning about this omission on the Access Virus kb, so I hope this isn't a growing trend. The stereo outputs are supplemented by just two additional outputs, which are freely assignable in multitimbral operation. Making their debut on a Microwave are two pedal and/or CV inputs: however, the current software seems merely to set pedal 1 as sustain, with the other having no function at all — or, if there is a way to activate it, I found no way of doing so. Hopefully, when the manual is updated to include the features specific to the XTk, all of its arcane powers will be revealed. Also awaiting exploitation is the so‑called stereo input, which remains as stubbornly mono as it was when the XT was first reviewed. MIDI In, Out and Thru plus the power socket complete the connections.

The XTk's underlying sound engine is identical to those of its rackmounting brethren so I suggest a browse through SOS July 1997 (for the review of the Microwave II) and October 1998 (Microwave XT) for the full story of this particular slant on synthesis. A 'wavetable' is a series of digitally stored waveforms, and wavetable synthesis involves playing back a series of individual waves from within a wavetable. The position within the wavetable, and hence the series of waves played back, can be varied using LFOs, envelopes and so on, and the resulting sound is then processed using standard subtractive synthesis tools such as filters.

Whether you need a harsh digital buzz, a deep filter squelch, a weird evolving pad or the strangest sound effect ever heard, the Microwave can serve it up...

The Microwave XTk is thus a digital synth, and it excels at 'digital' sounds; however, every wavetable contains three 'conventional' waveforms (sawtooth, square and triangle), which provide the source for countless analogue‑sounding patches. Each note has two oscillators which share the same wavetable but can access different portions of it. Their sound is shaped by an impressive digital filter with 13 different modes such as 24dB low‑pass, notch, waveshaper and so on, and a simpler 6dB low‑ or high‑pass filter with no resonance. The rest of the architecture is conventional enough: there are two LFOs, oscillator sync, ring modulation, FM and no less than four envelopes (filter, amplitude, wavetable and an assignable envelope).

The most powerful aspect of the Microwave's programming is the modulation matrix, where up to 16 sources may be freely connected to any 16 destinations. Given such powerful modulation features, having only two dedicated knobs (Mod1 and Mod2 amounts) with which to manipulate them seems a little stingy — especially as turning them doesn't even display what function they perform. Finally, an effects section offering chorus, flanger, auto‑wah, overdrive and several delays adds a final wash to the sound. These effects were described as 'beta' versions 15 months ago, but remain unchanged since then.

Though the XTk's audio input is labelled as stereo, it has yet to be implemented as such.

In common with other instruments that began life as modules, the Microwave XTk's arpeggiator works at voice level. This means that each patch has its own specific arpeggiator settings, including unique user‑definable patterns with up to 16 steps. The downside of this comes when using the XTk as a master keyboard in a MIDI system: there are no dedicated controls to pass on the same instant gratification to other modules. Fortunately, you can assign the four 'play' knobs located beneath the display to control some aspects of the arpeggiator.

The XTk can transmit its arpeggiator notes (and can transmit MIDI clock too, usefully) but there appears to be no way to do this without simultaneously triggering the internal sounds. In multitimbral mode, up to eight patches can be played, each keeping its own arpeggiator settings (except tempo, which is common to the whole Multi setup) or taking them from the Multi definitions.

In multitimbral mode, new functions have been added to reflect the XTk's status as a controller rather than a module. Naturally, you can layer internal and external sounds, transpose internal patches, detune them, direct them to individual outputs or produce split keyboard effects. You can build layers, each with their own velocity ranges, but the fun really starts when you layer several external modules, specifying a velocity range for each and switching between them using the XTk's controlling software. When I began this review, using Operating System version 2.29, I discovered a bug with this function. Having reported it to Waldorf, however, I was impressed to receive an email fix only a few days later.

The aim of synth design is often greater polyphony and more effects, and if judged purely in these terms, the Microwave series seems a little lacking. You can expand the polyphony from 10 to 30 voices; as I write this, however, no expansion units have yet been shipped to the UK — and it has to be said that expansion isn't cheap, at only about a hundred quid less than a brand new Microwave II, which seems pretty excessive. By today's standards, the Microwave's effects are basic too, having remained at the same stage of development for some time while Waldorf's programmers have been occupied with other projects. Similarly, the audio input is labelled 'stereo' yet still only works in mono, which is a shame, because those filters can work wonders on external signals.

I'll let you decide whether the XTk's four‑octave keyboard is a 'pro' or a 'con' (it gets the thumbs up from me), but either way you look at it the XTk provides a smaller, more portable alternative to a rackmount Microwave XT plus controller. And before I finish, it's important to underline the Microwave's greatest strength of all: its raw, undiluted sound. Whether you need a harsh digital buzz, a deep filter squelch, a weird evolving pad or the strangest sound effect ever heard, the Microwave can serve it up, and in a way that is both distinctive to the ear and a pleasure to program. With the XTk, once they've addressed the bugs and omissions, Waldorf may finally have found the perfect way to package this superb‑sounding synthesizer.

When I received the XTk for review, I filled it with Waldorf's latest factory soundset, obtained from their web site. I've always criticised Waldorf's factory sounds in the past, but this time they were ready for me — they used some of my own creations! The collection encompasses the best efforts from various experienced programmers, and some of the most notable are:

Some of the patches are taken from the 'Analog Classics' disk which is included in the package. These concentrate on analogue simulations and use only conventional waveforms and filters. All the stuff you'd expect is here: squelchy bass, swirly strings, fat brass, wibbly, arpeggiated, echoing tones and so on. The standard is pretty high, with many excellent starting points for patches of your own.

Opinions vary on the usefulness of Waldorf's 'endless' rotary encoders (knobs to you and me). On the one hand, they provide no instant visual picture of a patch — you can't tell what value they represent just by looking at them. On the other, any change you make to any parameter is always a smooth increase or decrease from the existing value, so when you call up a new patch and start tweaking, you never need to worry about sudden jumps or audible glitches.

My take on this is simple: without motorised knobs which leap to the position stored in memorised patches, you'll never totally 'see' a patch at all unless you're programming in manual mode. I have not found any solution which I like better than Waldorf's, which is spoiled only by the lack of information about the previous value of the control — something implemented perfectly on the Access Virus. Since Waldorf and Access live within spitting distance of each other, I can only hope that some industrial espionage will see this feature 'lifted' and added to the Microwave XT and XTk.

Although not cheap, the XTk provides Waldorf's Microwave technology in a superbly constructed, friendly sized container. If this doesn't add colour to your studio or stage performance, goodness knows what will!