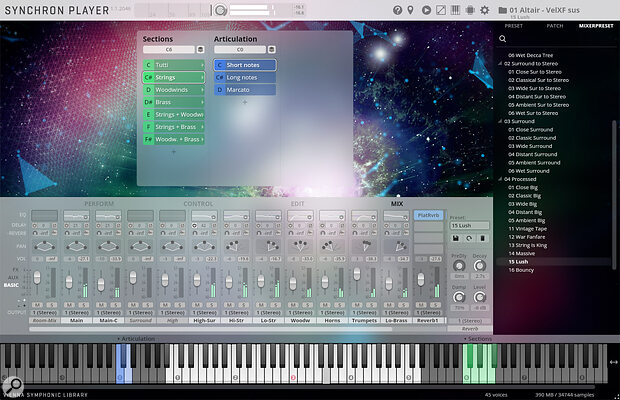 Presented as 26 themed libraries mostly retailing for under £100$100, VSL’s Big Bang Orchestra features a 70‑piece orchestra, six percussionists and assorted choirs strutting their stuff in the Vienna Synchron Stage. The alphabetically ordered series kicked off in 2020 with Andromeda and the eponymous BBO (both featuring massed ‘tutti’ performances, the latter a welcome freebie in the dark days of lockdown) and supposedly concluded with Ymir Children’s Choir and Zodiac Supermassive Ensembles.

But there’s more. Since no‑one has yet discovered a letter to follow ‘Z’, VSL have started over and released BBO Altair, featuring the Synchron Orchestra’s large strings, brass and woodwind sections performing together in a tutti ensemble and also recorded separately. Named after the brightest star in the Aquila constellation, Altair is 12.4GB installed and runs exclusively on VSL’s Synchron Player.

The library focuses on three essential playing styles: long and short notes, and an emphatic marcato delivery with a pronounced attack leading to a looped sustain, great for big histrionic stabs and dramatic final chords. Though there’s no designated spiccato bowing, the strings’ short‑note ‘agile’ option works well for fast rhythmic passages and their long notes sound superbly sonorous in the low register.

On a technical note, the Vienna Synchron Player’s colour‑coded keyswitch system makes it easy to change articulations on the fly, and you can layer or crossfade patches by selecting respectively ‘Mix’ or ‘Parallel’. An elaborate integrated mixer houses a suite of built‑in effects and a large number of mixer presets which make creative use of the library’s 11 microphone positions. You can choose between three types of dynamic preset: ‘Velocity’ assigns dynamic control to your keystroke velocity, ‘Vel XF sus’ uses the mod wheel to crossfade between long notes’ dynamic layers while retaining velocity control of the shorts, while ‘Vel XF’ lets you use the wheel to control all of the artics’ dynamics.

Altair’s pre‑orchestrated samples feature classic orchestral combinations voiced in octaves: at the high end, trumpets and horns for soaring superhero themes and flutes and piccolo for piping woodwind lines, while in the bass register trombones and tuba create menacing low brass timbres, with octave cellos and basses producing the dark, majestic and foreboding low strings timbre heard in a million movie scores. Layering the individual sections gives colourful results, and when all three play together they sound spectacular.

While it’s great to have such big sounds under your fingertips, the built‑in octaves can sound bogus when played in dense chords — less is more with these samples. For a fascinating insight into how the Altair sections work together in a full arrangement, check out Guy Bacos’ ‘Druid’s Duel’ video on VSL’s website. This shows how simple three‑note chords can be layered into imposing symphonic soundscapes, an object lesson in working with pre‑orchestrated samples.