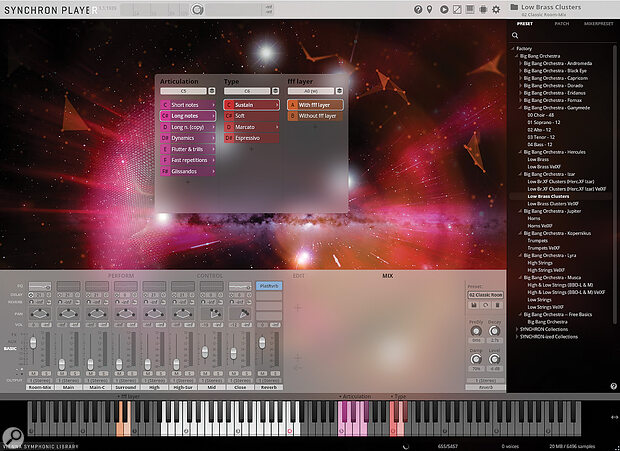 VSL have added six new brass and strings libraries to their ambitious Big Bang Orchestra series. As befits a product 13.8 billion years in the making, the company have thrown NASA-scale resources at the project, recording a 70-piece orchestra, six percussionists and 48 singers from 10 mic positions in the Vienna Synchron Stage. While the theme is galactic, prices are not astronomical: the latest cost less than €100 each, with the Basics pack available as a free download.

With woodwinds in the pipeline, the BBO universe is expanding, so maybe now's the time to take a voyage of discovery...

The libraries run on VSL's free Synchron Player (shown above), which incorporates an easy-to-use colour-coded keyswitch system and a range of transformative effects. All ensembles have wide playing ranges, five dynamic layers and note repetitions played at 120, 140 and 160 bpm, and all except Izar benefit from VSL's smooth-as-butter true legato mode.

With woodwinds in the pipeline, the BBO universe is expanding, so maybe now's the time to take a voyage of discovery...