Continuing the trend for reinventing the classics, this reworking of the original Trident 'A'‑range input module seeks to recreate the sound of the '70s. Hugh Robjohns steps back in time.

The Trident consoles had their origins in mixers developed during the '70s for the London recording studios of the same name. Feedback from the leading recording engineers of the day was influential in the development of the consoles, and they quickly acquired a reputation for a desirable sonic character which remains popular to this day. Many original Trident consoles are still used in specialist studios around the world, particularly in America, and there are several companies currently making replica consoles or 'producer modules' based on the favoured Trident designs.

The Trident MTA 'A'‑range dual‑channel preamp and equaliser reviewed here is built by Fletcher Electroacoustics — probably best known for their line of strikingly green Joemeek processors — in association with Malcolm Toft, the original managing director of the long‑defunct Trident Audio Developments. Barry Porter designed the electronics of the Trident 'A' and 'B' ranges with Malcolm Toft being responsible for the facilities and ergonomics of the original consoles. Ted Fletcher was designing Alice mixing consoles as a contemporary of Porter (who left Trident to work for him in 1976), and has comprehensively updated the electronics of this new module to endow a performance commensurate with the 21st Century.

Although the handbook refers to the 'A' range as being conceived in 1974, the console from which this input and EQ module design derives was, in fact, first marketed in the summer of 1972 as the Triad 'A' range. OK, I admit to being sad enough to have searched my magazine archives to check the dates of the original advertisements — I don't get out much...

Perhaps the first thing to make clear is that this is not an 'exact' recreation of the original 'A'‑range module. Although the controls of the new 'A'‑range unit are similarly arranged and specified, the underlying electronics have been thoroughly updated, as already mentioned — after all, analogue electronics and performance expectations have come a long way in a quarter of a century. Several aspects of the original design had to be updated in any case to allow reformatting as a stand‑alone processor. Having said that, the designers claim to have kept the sonic character very much along the lines of the original, in spite of the better noise figures, wider and more uniform frequency response, and diminished transient distortion.

The 2U rackmounting box is well constructed, with a distinctive and unusual plum‑coloured front panel and horizontal faders showing the gain of each of the EQ bands. Two completely independent channels are provided, each with selectable mic and line inputs, switchable phantom power, and a stepped gain control. Polarity inversion switches can affect both mic and line inputs, but the unit otherwise retains absolute polarity regardless of whether the EQ is switched in or out. The equalisation sections each incorporate a trio of high‑pass filters and another of low‑pass filters, in addition to four separate equaliser bands. The top and bottom sections have shelf responses while the two mid‑bands are bell‑shaped. Every band is provided with four selectable turnover frequencies, overlapping nicely to allow very musical tonal correction. The sliders are labelled for ±15dB of gain, with centre detents.

The 'A'‑range processor requires only 190mm of rack depth (not including the connectors) and doesn't get warm at all. The rear panel is clearly labelled and equipped with the ubiquitous IEC mains inlet and integral fuse/voltage selector. Six XLRs provide mic and line audio I/O connections, though the line inputs may also be connected through separate, paralleled TRS quarter‑inch jack sockets. There is no mains isolator switch on either rear or front panel — once this unit is plugged in it is continuously powered. On the review model there was also no indication of the fuse rating (100mA) or power consumption, either on the unit or in the handbook. However, the review unit was a hand‑assembled production version, and I gather that this oversight is to be corrected on the final production units.

Internally, the components are all conventional types mounted on high‑quality fibreglass PCBs — one for each channel mounted one above the other. Numerous daughter boards support and interface the front‑panel switches and LEDs. A PSU module is mounted on the rear panel and supplied from a tiny transformer fixed to the right‑hand side of the chassis. The type and positioning of the mains transformer has been chosen to minimise any stray flux interfering with the four large inductors in the EQ circuitry, and soft steel top and bottom panels help to minimise any effects from other equipment mounted above and below in a rack. Although noise and hum figures are very low, users may find that careful selection of adjacent units may produce further improvements.

Mic preamps designed in the era of the original 'A' range employed transformers to match impedances, unbalance the microphone signal, and provide much‑needed voltage gain, but with the side effect of causing some frequency response aberrations and distortion. This remodelled design retains an input transformer to preserve the sonic character, but reduces the ratio from the original 10:1 down to 4:1. This improves linearity but requires more gain from the input amplifier — something modern electronics can do rather better than was possible in the '70s. Consequently, the original dual‑transistor front end has been replaced by a modern high‑end integrated amplifier (an MC33078 bipolar op amp, to be precise), with an 11‑way switch incrementing the gain in steps of between 3dB and 6dB. A quad JFET op amp provides additional gain stages and the polarity inversion facility.

The original console module used the same input stage to handle both line and mic inputs, but these two functions have been separated in this recreation to improve flexibility and performance. The balanced line input is accommodated with one of Ted Fletcher's 'Superbal' electronically balanced input circuits, based around another JFET op amp.

The output level control allows full attenuation at its counter‑clockwise end and a further 12dB of gain above its nominal 0dB position. The scaling of the input gain control is rather less well calibrated, particularly at its bottom end. With the output control at its 0dB position and all EQ switched out, the maximum mic input gain was found to be 62dB (3dB short of the panel marking). However, the minimum gain was found to be 16dB rather than the 5dB marked at the end of the scale — a pedantic point, but one that may cause confusion for some users. The line input gain ranges between ‑9dB at the minimum setting to +20dB at the maximum, with the mid‑position equating to around +2dB. 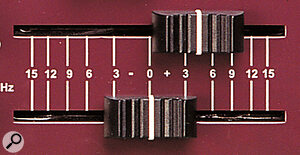 The controls are slightly inaccurate in their calibrations — these main EQ sliders are calibrated for ±15dB where a range of only ±13dB actually appears to be available — but the sound is magical.

The raison d'être of this unit is its comprehensive but highly musical equalisation facilities. Band filtering is something often overlooked these days, but the importance of removing subsonic and ultrasonic signals can not be over‑stressed, especially now that ubiquitous nearfield monitoring precludes hearing the bottom octave of a recording. The 'A'‑range processor employs Sallen and Key filters with 12dB/octave slopes and minimal phase shifting, which sound smooth and unobtrusive yet remove sonic rubbish very effectively. Two banks of buttons select low‑pass filtering at 9, 11 and 13kHz, and high‑pass filtering at 25, 50 and 100Hz.

The four‑band equaliser looks to be a traditional design with shelf responses for the top and bottom sections and bell responses for the two middle bands — the Q value of these is around 1.2, which is pretty broad and contributes to the very musical nature of this design. Two discrete Class‑A transistor amplifier stages are employed in the equaliser, one for the top and bottom bands and the other for the mid‑bands. These are based on the original topologies, but have been improved with a constant current source in the first stage to dramatically improve headroom and reduce transient distortion — a red LED warns of impending clipping.

The two mid‑band sections employ large hand‑wound inductors as part of their frequency selective circuitry — an improvement over the 'pot‑core' elements used in the original because of space restrictions within the console module. However, these inductors are prone to picking up stray magnetic fields (notably from external PSU transformers), which is why a faint trace of residual hum may be audible in some situations when the EQ is switched in.

Each of the four EQ bands is equipped with a three‑position rotary switch to select the turnover frequency, and a horizontal fader to adjust boost or cut up to 13dB (despite the 15dB calibration markings). The top and bottom shelf sections can be switched between 8, 10, 12, and 15kHz, and 50, 80, 100 and 150Hz respectively, while the two mid‑bands offer 0.25, 0.5, 1 and 2kHz and 3, 5, 7, and 9kHz — all nicely overlapping and providing a fine degree of control.

The output stage is a complete redesign from the original as it has to interface with the outside world rather than a console's fader and routing section. Another MC33078 op amp is employed to drive the output XLR in an auto‑balancing configuration which maintains signal level even if connected to an unbalanced destination.

As a mic preamp, this new 'A'‑range unit is very competent, with extremely low distortion, respectable noise performance, and a very pleasant, yet subtle character. It is not as warm and rounded as a typical valve stage, but has more body and personality than the rather clinical‑sounding precision preamps available these days. In direct comparison, I found it was not as fulsome and natural at the bottom end as my own GML preamps, but was certainly preferable to the (highly competent) input stages of a little Mackie 1402VLZ mixer during a recent location recording session.

The predominant reason for buying this 'A'‑range processor is undoubtedly its equalisation, which is simply magical! OK, so the sliders are a marketing hook (the same facilities could have been incorporated into a 1U case with conventional rotary controls if the 'classic styling' had been dispensed with), but the fact remains that the sound of this equaliser is delightful. This is a very musical tool indeed, living up to the claims of the original 'A'‑range console as 'the first truly musical sound mixer'. This is not a technical tool for correcting poor recordings — it is intended for delicate, creative tailoring and enhancement duties, helping to 'unveil' subtle tonal characteristics and enable instruments to stand out in a mix without losing their subtlety and character, or taming the less desirable artifacts of a signal source without seeming to 'change' the overall sound in a negative way.

At this stratospheric UK price the 'A'‑range Dual Discrete Channel is positioned well above a lot of very good products and will have to face up to competition from high‑end names including Avalon, Millennia, Focusrite, and Summit. However, with its unique character, musical equalisation and high build quality I'm sure it will find a niche in the market.

A reinvented classic dual‑channel mic preamp and equaliser derived from the Trident 'A'‑range console of the 1970s, bringing old‑world musicality up to date.