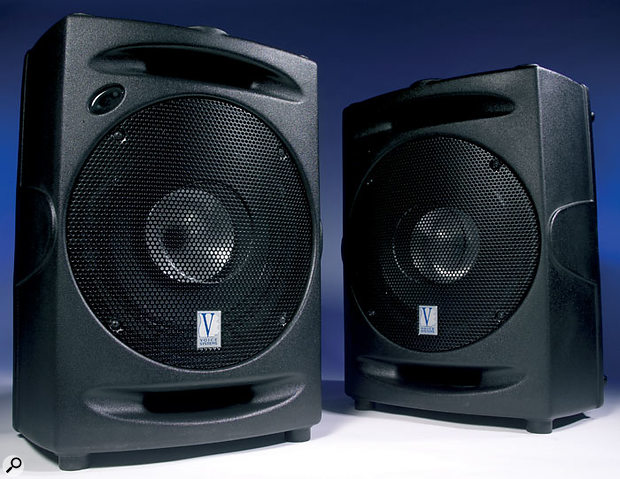 The PA market isn't short of powered 'plastic' cabinets at the moment, but not many use the coaxial speaker design approach — which is what sets apart this Italian-made model.

If it seems that a disproportionate number of 'plastic' PA speakers come from Italy, the Voice Systems Eclipse Active speakers do nothing to disabuse one of that notion, as they're built in Mondaino in that very country. Many of the PA systems we've looked at so far in SOS follow a fairly standard layout, but the Eclipse departs from tradition by using a coaxial speaker — one where the tweeter is located in the centre of the bass/mid cone driver. Coaxial speakers have the benefit of being more like a true point-source of sound than the more conventional split systems, where the tweeter is invariably above the cone driver, and this may make arraying multiple speakers easier, because the polar pattern of each speaker is very predictable.

In this particular system, a one-inch tweeter feeds a spherical waveguide horn at the centre of a 12-inch bass/mid driver, the shape of the horn producing a 60-degree x 60-degree coverage pattern. This can be a good thing or a bad thing, depending on the venue. Most horns have a rectangular flare, producing a pattern that is wider than it is high, and that can make it easier to direct the sound onto the audience, while minimising the amount that hits the ceiling. On the other hand, if the audience are very close to the speakers the high end from a typical system may go right over the heads of the first few rows, so there are benefits and disadvantages to both approaches.

Powering each Eclipse is a 300W amp feeding the bass/mid driver and a 100W amp feeding the tweeter. An electronic crossover operating at 2kHz splits the signal between the two power amplifiers. Little information is given regarding the type of amplifiers used, although we are told that each is fed via its own compressor, which can control levels in a transparent way, to avoid clipping. This 'Multicomp' compressor can be bypassed, but I can't see any advantage in doing so, as it offers a useful degree of protection against speaker over-excursions and audible distortion. 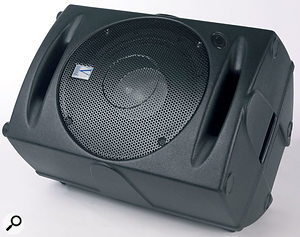 The coaxial speaker design means that the Eclipse speakers disperse sound in the same way whether used upright or on their sides as wedge monitors.Photo: Mike Cameron

Because the coaxial design means that there's no need for a horn flare above the main driver, the Eclipse cabinets (made from a material called HDPE) are shorter and stockier than most of the systems we've looked at. There are moulded handles on each side, as well as on the tops, and a standard pole-mount socket is fitted at the base of each cabinet. Recesses on the top of the cabinets allow stacking, and as the optional 12-inch active subwoofer is available in the same size of cabinet, the main boxes can be stacked directly on top of the subs if desired, rather than being placed on stands. On a practical note, the side handles are less than ideally positioned for lifting the speakers onto stands single-handed, although the weight of these speakers is sensible enough, at just 21kg each. The speakers are well protected by a perforated steel grille, and there's a blue LED to show when the power is on.

As is now almost obligatory, the rear of each Eclipse cabinet is angled to allow sideways mounting as a stage monitor, and this is one area in which the symmetrical dispersion pattern can be a real advantage, as the polar response is exactly the same as when the cabinet is standing 'right way up'.

The rear panel of the Eclipse, as usual for the active 'plastic' systems, hosts its few controls and its heatsink. Here you'll find buttons for putting the Multicomp compressor in or out of circuit, a ground-lift switch and a 'Loud' button for scooping mid frequencies, to produce a bright, punchy sound. A rotary control sets the input gain and there's a combi XLR/jack connector that can take a balanced or unbalanced input, as well as a hard-wired link XLR of the opposite gender for feeding additional speakers. The input XLR is sensitive enough to directly accept a dynamic mic (30dB maximum gain), should this be necessary — a useful feature if your mixer fails or if you need a simple voice-amplification system. Status LEDs show signal present and the operation of the high and low compressors, as well as the presence of power. The last comes in via the usual IEC socket, with switch, and there's a delay circuit to prevent thumping when power is switched on or off.

By way of performance, the manufacturers of the Eclipse (who, incidentally, also make the Viscount range of products that includes master keyboards and digital organs) claim a 50Hz to 20kHz frequency response, but this is measured at -10dB, not the usual -3dB, so don't expect earth-moving bass unless you use the optional subwoofer (around £320). There's no maximum SPL figure, which is somewhat remiss, although a sensitivity of 98dB/Watt/metre is quoted. As this takes no account of power compression at higher levels, it actually means very little, but in our field test (well, pub test, really) the speakers proved capable of plenty of level. 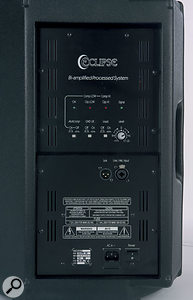 Our tests involved the usual variety of acts, both electric and acoustic, and the first thing I noticed about the Eclipses was that they sounded nice and neutral on vocals and acoustic instruments, with a well-defined mid-range complimented by a smooth high end. The high-end clarity fell off a bit at a distance, but in the main they handled mid-range sound sources extremely well. At higher levels, or when faced with much in the way of bass content, the low end (by which I really mean the upper end of the bass register, at around 120 to 150Hz) became somewhat confused, with the cabinet resonance kicking in more than I'd have liked, but then if you're expecting these speakers to handle bass they really should be used with a sub. The spread of sound was also more even than I expected, with that 60-degree field I mentioned earlier, so there were no obvious dead areas in our pub-sized venue. I think we'd have managed an even better sound if we'd used a graphic equaliser to roll off the lower-mid a bit, but my own system doesn't have one so I didn't get a chance to try this.

Incidentally, the sound from behind these speakers is extremely dull and boxy, so you need to be using stage monitors to have any idea of what the sound out front is like. This is to be expected, as PA speakers are designed to project the sound forwards, not back onto the stage, but standing behind these speakers produced an even duller, more coloured sound than I remember from other systems I've tested in the same room.

There's a lot of choice in the integrated PA-speaker market, but nevertheless the Eclipses impressed me with their good mid-range clarity, especially on vocals. The use of a coaxial tweeter may well have helped in this respect. They're also a practical size (430 x 560 x 410mm) and weight for throwing into the back of a car, although the design of the side handles leaves a little to be desired.

Like any small speaker, these are a compromise, but used on their own they're very good for small-to-medium venues where the prime requirement is amplification of vocals or mid-range instruments such as guitars. Attempts to force them to handle any significant amount of bass result in a more coloured sound, so use with a subwoofer or two is highly recommended if you need full-range coverage. A graphic equaliser could also be an advantage to help tame venue problems. However, given their mid-range price, the Eclipses turn in a very creditable performance for speakers of this type.

The Eclipses are a departure in design from the usual powered PA speaker and have a more natural sounding mid-range than many of their competitors. They do, however, need to be used with a sub to get the best out of them in full-range applications.