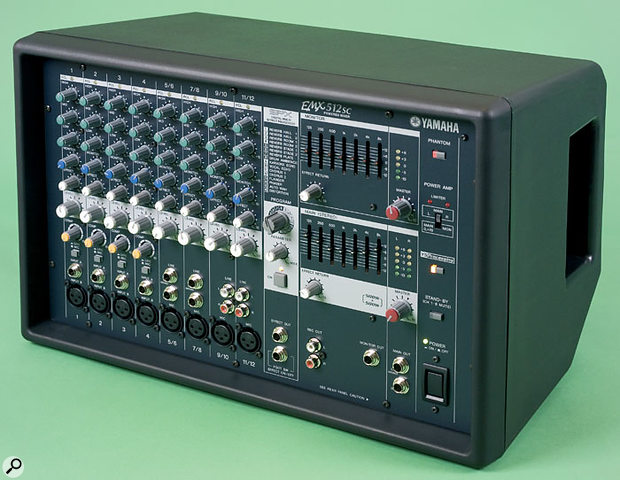 In the small PA market, convenience and size are two of the most important factors influencing purchasing decisions, and a lot of people are now using either powered speakers with a separate mixer or passive speakers driven from a powered mixer. In both cases, there's been a movement towards mixers with built-in effects, which keeps setup time to a minimum. Yamaha's EMX512SC is just such a mixer, the largest in a new series of three powered consoles that offers unusually good on-board effects.

The 512SC has a pair of integral 500W amplifiers on board, although anyone needing less power can check out the 2x200W EMX212S or the 2x300W EMX312C. I couldn't get anyone at Yamaha to shed any light on the amplifier technology used, but given the light weight of the 512SC and the huge amount of power it produces, I'm assuming that some kind of class-D digital design is hiding under the hood. The amplifiers are rated at 500W each into 4Ω or 350W into 8Ω, although these are maximum power ratings. No continuous power ratings are given but these will inevitably be somewhat less.

The three new EMX models replace the EMX62M, EMX66M, EMX68S and EMX88S, and whichever one you choose you get a total of 12 input channels. Four are mono mic/line inputs and four can function either as mono mic inputs or stereo line inputs, with RCA phonos handling the stereo inputs on the last two stereo channels, as well as the main tape outputs. All channels have balanced XLR inputs, pan/balance controls and a main level control knob (rather than a slider), with a further control for the pre-fade monitor send. Channels 1-4 have mic/line switching, while the two largest models also have compressors on these channels.

Weighing around 22lbs and measuring just 442 x 274 x 286mm (around 18 x 11 x 11 inches), the wedge-shaped package of the 512SC incorporates a moulded carrying handle at the rear (a rackmounting kit is available for those who prefer that format). Both Speakon and jack speaker outlets are available on the rear panel, while the mains comes in via a standard IEC connector, also on the rear panel. A sensibly quiet cooling fan is built into the amplifier section, venting through a grille in the rear panel, which also forms part of the heatsink.

The physical design of the mixer isn't unique: this monitor wedge shape is now quite common, because it's practical and ergonomically suited to both front-of-house engineers and bands who need to adjust their own sound from the stage. A durable plastic is used for the outer shell, leaving a large panel area at the front for all the necessary controls and inputs. The mixer offers a fixed three-band EQ on each input channel, teamed with a seven-band graphic EQ (125Hz, 250Hz, 500Hz, 1kHz, 2kHz, 4kHz, 8kHz) in the master section. I couldn't find any mention in the documentation of the channel EQ frequencies or characteristics but the channel EQ sounds sweet enough, with the proviso that the mid is used mainly for cutting rather than boosting.

A feature common to many powered mixers is the ability to switch the function of the two amplifiers between stereo front-of-house use and a configuration where one channel drives the front-of-house speakers in mono while the second channel drives a separate monitor system. In the case of the EMX512SC, you can also split the graphic equaliser in monitor mode, giving the opportunity to separately equalise the main (FOH) and monitor outputs. For FOH use, the lower graphic equaliser controls function in stereo, whereas in monitor mode the lower controls handle the mono FOH signal and the upper controls take care of the monitor EQ.

A neat feature of the EMX512SC is a standby mode that leaves a music input feed live so that you can play background music when not performing, without having to mute all your mics individually. Note, however, that this only mutes the mono channels, so if you also have mics plugged into the stereo channels you may still need to mute those separately.

Lots of mixers include built-in effects, but few are as sophisticated or good sounding as the ones found here. The reason for their high quality is that they're based on the established Yamaha SPX range of outboard signal processors. In addition to extremely good reverberation you also get echo, chorus, flanger, phaser and distortion. In all, 16 effect types are available, all with 24-bit resolution and 32-bit internal processing, plus the facility to connect an optional footswitch for bypassing the effects. To keep things simple, you call up one of 16 effects types via the rotary switch, then adjust a single main editing parameter using the knob below. In the case of the reverbs, the editable parameter is decay time, while for delays it's delay time. Personally, I'd have liked a tap tempo button for setting delay time, but you can't have everything. The amount of effect per channel is set using a post-fade send control, in the usual way, and there's also a master effects return level control, as well as a manual effects-bypass button. A separate effects output jack allows the output from the effects section to be routed separately, something you might wish to do if you need to use the effects section while making recordings. 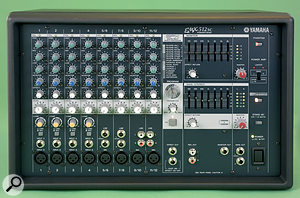 With all controls and audio connectivity on the front panel, the 512SC is very convenient to use. The channels each have access to simple three-band EQ, but there's also a seven-band graphic equaliser (centre right) for the master. Compressors on channels 1-4 are controlled by a single knob, for speed of adjustment, and perform well despite their simplicity.Photo: Mark Ewing

One problem I've found with other effect-equipped mixers is that very few of the reverbs have the right character for live performance — cathedrals and caverns are provided but there's often little that's usable. Yamaha haven't fallen into this trap, and although you can create those huge spaces there's also a first-rate choice of plates, rooms and chambers with variable decay time.

The compressors on each of the mono input channels are controlled by a single knob at the bottom of the channel strip. Compression can be a tremendous ally in levelling out a vocal part, but users must appreciate that for every 1dB of compression used you get 1dB closer to the threshold at which the system will feed back, so using more than minimal compression on the mic channels in smaller or acoustically difficult venues may not be a good idea. However, you can still safely use it on guitars, basses and backing tracks, if necessary.

The technical spec of the 512SC is reassuringly good, with a frequency response extending from 20Hz-20 kHz (-3dB, +2dB) with THD + noise at less than 0.5 percent when the desk is working hard. Equivalent Input Noise is quoted as -115 dBu, which, although not as good as the better studio mixers, is absolutely fine for live use, where close miking is the norm. Phantom power is available, but this is only at 15V rather than the standard 48V, and may not be enough for some capacitor mics and DI boxes. A limiter is available to protect the speakers from being driven with clipped waveforms, and Yamaha's proprietary speaker processing is built in to smooth out the high end and enhance the low end. Details on exactly how it does this are rather sketchy!

The EMX512SC dishes out an incredible amount of power for such a ludicrously compact and lightweight unit, and though fixed EQ frequencies are quite limiting the sound quality is generally excellent, with particularly good effects. The reverbs really are great, with plenty of decay range available via the parameter knob, but I'm not convinced that distortion has any place as a PA send effect!

Aside from the mid EQ, which inevitably works better for cutting than for boosting, the EQ is well-focused and musical. Even the graphic EQ sounds very smooth and natural, if used sparingly, and that's not something that can be said for every graphic equaliser! Having a built-in graphic EQ that can be split between the main and monitor feeds is definitely useful, providing you appreciate its limitations, and the same can be said of the feedback detector (see box below), which at least warns of problems and gives you a chance to turn down the offending channel. I tried the speaker-processing button but found the result extremely subtle, lending only a slight increase in warmth and smoothing of the high end.

Finally, I tested the compressors and was surprised how good they sound, especially given that they have only one control. Providing you don't push your system into feedback, they really add that studio density and polish. The settings the user doesn't have access to, such as ratio, attack and release, seem to be optimised for vocal use but also work well enough on instruments such as DI'd acoustic guitar and bass guitar.

Yamaha's EMX512SC is a great example of just how far PA technology has come, thanks in part to innovations in efficient amplifier design. When high-powered audio amplifiers first appeared, they were incredibly heavy, yet this whole package can be carried effortlessly in one hand and it doesn't even run that hot. I can find little to dislike about the EMX512SC, although I found the lack of a headphone output a little puzzling, as it can be useful to check the monitor mix via headphones, not to mention setting up a balance when an audience is in the room without feeding the sound through the speakers. I've also made my feeling known about the low-voltage phantom powering. However, on the whole this is a superbly flexible and surprisingly affordable powered mixer for club and pub acts who have to carry their own gear. The quality of the reverbs is exceptional and comes far closer to what you'd expect from a studio processor than just about any of the competition, and virtually every aspect of the signal path is quiet and musical, even the graphic EQ. In fact, the most frustrating thing for me was not the unit itself but the paucity of technical information, as I really would like to know more about how the power amps are rated and how they work, and what frequency ranges are affected by the channel EQ.

As I said at the outset, there are two ways you can go for an easy life: you can buy a powered mixer and add passive speakers or you can buy powered speakers and use them with a regular mixer, ideally with integral effects. You might feel that the powered speaker approach is more flexible, as you can always add on more speakers when you need more power, but as this mixer has line-level outputs as well as speaker outputs, you could feed additional powered speakers from these connections if you need more coverage. Having said that, one kilowatt goes a long way when teamed with efficient speakers! Add a couple of decent two-way passive speakers and you have a great little PA rig that should fit into the back of just about any car and delivers a very polished sound.

Yamaha's new Feedback Channel Locator (FCL) indicator is featured in the EMX512SC. This feature shows which of the input channels is responsible for any feedback problem, although there's no automatic 'feedback killer' on board, which would have made the package even more attractive. (A seven-band graphic EQ such as the one on board is really far too coarse for notching out feedback-prone frequency bands, though it is very useful for overall tonal shaping to compensate for room acoustics.)

Provided eight mic inputs is enough for your needs, the EMX512SC is a great solution to high-power amplification, mixing and seriously good effects, in a box you can carry in one hand.

Top 10 Boring Things That Are Really Important In The Studio
2 weeks 1 day ago.