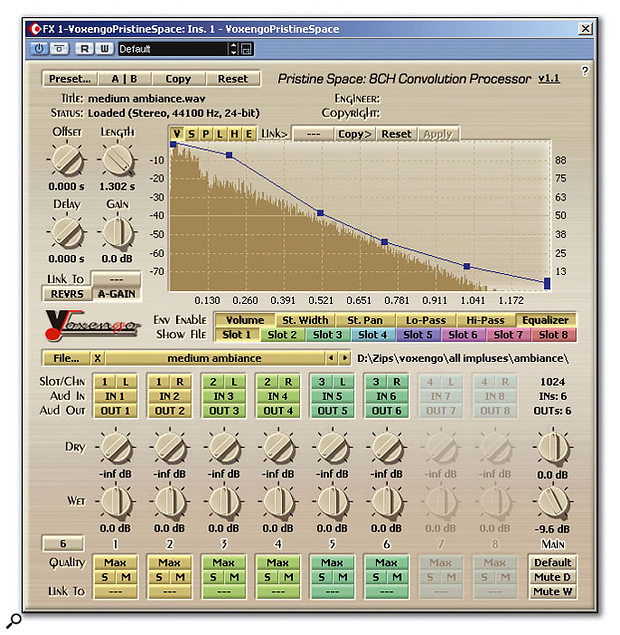 Surround-capable reverbs don't usually come with a price tag of £100. However, nobody seems to have told Voxengo. So just how good is their Pristine Space PC VST plug-in?

Continuing increases in host-based processing power have now made convolution reverb a viable option for anyone with a modern Mac or PC, but many of the options available are pricy. In the May 2004 issue, for instance, Paul White reviewed the Waves IR1 convolution reverb plug-in; this is clearly an impressive product, but many people will baulk at its £699 price tag. PC users with a VST-friendly sequencer who would like to hear what convolution can offer might, therefore, be interested to try Voxengo's Pristine Space, which has a price closer to £100 (depending upon the current US-UK exchange rate). Keen readers of Mark Wherry's Cubase Notes column from May 2004 will also have noted that, remarkably, Pristine Space is not just a stereo reverb — with support for up to eight channels, it is possible to use it in surround-sound configurations up to 7.1.

Paul's recent IR1 review provides a useful introduction to the convolution process and the idea of 'impulse responses' that capture the properties of a real reverberant space, so interested readers might care to take a look at that if they need some background information. In addition to convolution and support for eight channels, the other key features of Pristine Space include comprehensive routing options, 'low quality' and 'zero latency' modes that use less CPU resources, a large number of impulse files that are available as free downloads, some non-destructive editing of impulse files and a browser-based help file. Usefully, a fully working demo can be obtained as a 1MB download from the Voxengo web site and tested on your own system, the only restriction being that it cuts out briefly every 25 seconds. If you decide to purchase, a registration number is supplied to unlock the full version.

The screen shot shows the user interface for Pristine Space and, aside from some global settings (for example, for setting latency), everything is confined to this single screen. The Preset button provides a selection of default channel configuration options, covering common situations that Pristine Space might be used in. These include as a two-channel insert effect, two-channel send effect and a 'true' stereo reverb send (using four channels). These presets enable the appropriate number of input/output channels (situated in the bottom half of the display) but the user still has to load the appropriate mono or stereo WAV impulse file into each channel's Slot. Of course, the channels can also be configured manually, as for the configuration shown in the screen shot and used for 5.1 surround project within Cubase SX — the button immediately above the word Quality at the bottom left of the screen specifies the number of channels to be used. The Quality button for each slot toggles between maximum and low quality modes; as convolution reverbs are processor-hungry, I found I used low-quality mode while tracking in SX before switching to maximum quality when performing an audio mixdown.

Some 180 impulse files are available from Voxengo's web site. The WAV file names give a clear idea of their intention and they range from small and intimate spaces through to vast halls or cathedrals. Some examples include:

The Slot buttons along the centre specify which of the eight convolution channels is currently selected, and the envelope display and File dialogue change to reflect the currently selected slot. Once an impulse file is loaded into a particular slot, some non-destructive editing options are available. The Length knob allows the length of the reverb tail to be cut, while the Env Enable buttons can be used to turn on/off individual envelopes for volume, stereo width, stereo pan, low- and high-pass filters and EQ which are applied to the impulse. If several impulse slots are being used, the envelopes for each slot are independent of each other.

To edit the envelopes themselves, the buttons above the impulse display are used to select the required function ('V' is volume, 'S' is stereo width, and so on). Double-clicking on an envelope adds a further edit point. Convolution channels can also be linked via the Link To button. Overall, editing is straightforward and, while there is not the same degree of control that is available in a product like Waves IR1, the ability to edit reverb length and tonal characteristics will probably be sufficient to meet the key requirements for most potential users.

Of course, in order to use Pristine Space, some suitable impulse responses are needed from real rooms, hardware reverbs or modelling software. Voxengo have a large number of suitable impulse responses available for download via their web site. These are bundled into a number of collections, each stored in a RAR archive (but not a ZIP, so you will need something like WinRAR from www.rarlab.com to unpack them). The Spaced Out box lists a few of these to give a taste of what is available.

Voxengo also provide links to other web sites with suitable impulse files. These include the Noise Vault (www.noisevault.com) where I was able to download an excellent small collection of impulses derived from a Lexicon Ambience algorithm — unfortunately for me, I don't own a high-end Lexicon reverb unit so I couldn't do a direct comparison but, subjectively, the Pristine Space version did sound pretty good.

Throughout testing, Pristine Space seemed very stable, and setting up within SX proved simple enough. Used as a stereo send/return effect, it's no different from any other VST plug-in, although there are a number of ways to configure Pristine Space itself when operating in this way. Things are a little more complex if you want to use the plug-in in a surround sound project, but Mark Wherry's May 2004 Cubase Notes column details how to configure a multi-channel send with a surround panner to place the resulting reverb within the surround space.

In terms of CPU loading, like other convolution-based reverbs, Pristine Space is pretty demanding. On my test system, a six-channel configuration at maximum quality, on average, left the SX CPU meter at the 40 to 50 percent mark — the exact figure depends on buffer sizes and what else is being demanded of the system at a given time. The low-quality setting reduced this down to about 30 percent and, while tracking, the quality of this was more than adequate.

So how does Pristine Space sound? In Paul's Waves IR1 review, he commented that most convolution reverbs sound similar when fed with the same impulse files. In this sense, obtaining some good impulse files is key to getting the best out of Pristine Space. However, to my ears at least, Voxengo have done a very good job on this front and this plug-in can produce some seriously good results. With solo instruments or vocals in isolation, the sense of being in a 'real' space is particularly noticeable.

Many might consider Pristine Space to be good value for money even if it was just capable of stereo use, but the multi-channel support turns it into a real bargain. If you have not, as yet, experienced what convolution reverb can produce, then the demo version is most certainly worth testing. At this price point, Pristine Space comes highly recommended.

Pristine Space provides an excellent introduction to convolution reverb for those on a budget and is capable of some excellent results — the fact that it can also be used in a surround-sound context makes it a real bargain.