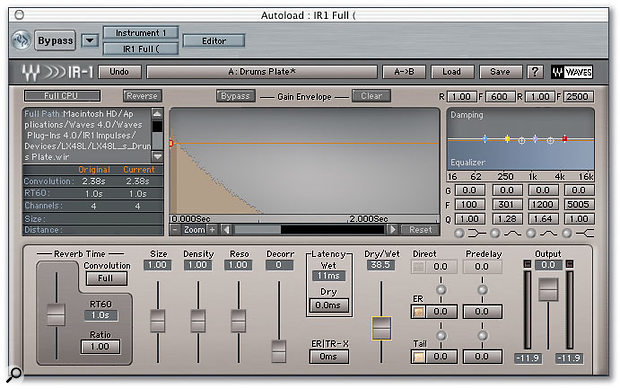 If you want reverb 'sampled' from real spaces, there are now quite a few options available. As you'd expect, however, Waves have managed to come up with something a little special — a convolving reverb that offers detailed control over the sound.

Now that we all have processing power to burn (at least until new and more powerful software eats it up again!), it seems as though the process of convolution is the answer to getting seriously high-quality reverb running on a desktop studio system. Convolution makes available the sampled acoustics of real spaces, and also makes it possible to clone the sound of hardware reverb presets, but its down side is that there's a limited amount of adjustment available. That's because convolution works by 'multiplying' your audio file by an impulse response recorded in a real reverberant space, and as the impulse response is, in effect, just another audio file, the amount of adjustment available to the user is often limited to shortening the reverb decay and adding EQ.

Waves seem to have overcome at least some of these limitations in their new IR1 convolution reverb plug-in, which is available for Mac OS X and Windows in RTAS, Audiosuite and VST formats and also in Windows Direct X and Mac OS HTDM, MAS and Audio Units versions. IR1 allows the user to both shorten and lengthen the reverb RT60 decay time, adjust the room size, apply complex decay envelopes, emphasise room mode resonances, adjust the damping and change the relative levels of the early reflections and the decay tail. I can understand how some of these things could be achieved by applying resynthesis methods to stretch or squash the impulse response, but the IR1 designers have clearly gone much further than this. However, it is clear that virtually all these things are achieved by processing the impulse response itself, as a new impulse response is calculated after every adjustment — a process which takes a second or so.

The full list of buildings and ambiences 'sampled' for the IR1 impulse library is as follows:

Not only is IR1 's reverb engine rather special, then, but a lot of innovation has also gone in to creating the impulse responses themselves, many of which were recorded in world-famous buildings — the full list is reproduced elsewhere in this review. Arranging access to these buildings is no trivial matter, so a process was devised that would produce the very best results, and which would also translate to future multi-channel surround formats. The IR recordings were made by Professor Angelo Farina of Parma University, who developed an improved method of capturing the impulse responses to minimise noise contamination and harmonic distortion, presumably by using slower sweep signals and/or correlating multiple sweeps rather than the simplistic 'bursting a balloon' approach. All the IRs were sampled at 96kHz and a comprehensive set of 360-degree surround measurements was taken (one measurement every 10 degrees), which is why his impulse responses can be used for surround as well as the present stereo system. Professor Farina's system is also claimed to capture the early reflections in a way that preserves stereo directional information more effectively, though no additional information is available on how this was achieved.

The IR1 library comes on two CD-ROMs and includes over 60 room types, plus 60 impulses from classic hardware reverb devices hardware presets. If you exhaust the possibilities of the library, you can also import third-party impulse responses in WAV form. As with any convolution reverb processor, you can also do lots of weird things by using short snatches of audio instead of impulse responses.

When I first heard how the recordings had been made, I asked about the possibility of surround reverb, but was told this was a project for the future. However, some of the halls are sampled both from close to the front and from seats further back, so it may be possible to cook up something convincing in surround by setting up two stereo reverbs on two sends, one providing the front-of-room reverb and one the rear. If positioned correctly in the surround mix, this could be quite convincing, even though it isn't true surround reverb.

IR1 has a straightforward user interface that offers controls very similar to those you'd fine on a traditional synthetic reverb unit, the main difference being that you have to load an impulse response of the type you want to use before you can make any adjustments. A 'light' version is also available for where CPU power is limited, and still sounds very sweet. The manual doesn't make it clear where corners have been cut — some competing models achieve this by reducing the reverb bandwidth, which for most 'real space' simulations is quite acceptable.

The IR1 decay time can be adjusted both positively and negatively over a 4:1 range and there are four faders for adjusting room size, reverb density, mode resonance and decorrelation, the latter being a slightly unconventional parameter that provides a useful degree of control over stereo spaciousness. A familiar wet/dry fader sets the reverb mix and there are separate windows for adjusting the direct sound, early reflections and tail timing and the relative ER/tail level. This works by analysing the impulse response to separate it into early reflections and reverb tail components, while damping is achieved by applying filtering to the high, middle and low-frequency bands of the IR. The overall colour of the reverb sound may also be tweaked using a familiar four-band paragraphic equaliser.

Running some tests confirmed that most of these adjustments sound natural if used over a sensible range, and the decay time can be adjusted quite significantly without giving the game away. However, over-adjustment of the resonance parameter definitely sounds a little odd, though it could be useful as a special effect. The provided impulse responses cover a good range and there are some exceptionally nice ambiences (check out some of the studios) which sound very natural on drums. The ability to fine-tune the settings is very welcome, and is particularly useful with the sampled hardware units where you might want a little more control rather than using the preset as is.

Something that seems to be true of many convolution reverb IRs is that because of the way the measurements are taken, the original sound and early reflections are much stronger than with artifical reverbs, the practical outcome of which is that you often have to add way more reverb than you would if you were using synthetic reverb. The main benefit is that you do get a very strong sense of a sound sitting in a real space rather than a dry sound with a layer of reverb stuck on top, and in this respect, Waves are to be commended in providing some excellent impulse responses that capture the magic of a whole range of musically useful halls, rooms and spaces.

Most convolution reverbs sound similar when fed with the same impulse responses — the process is well known and mathematically well documented, even though it is very processor-intensive. What sets IR1 apart from most of its competitors is that it offers a great deal more adjustment once you've loaded the impulse response, and while excessive adjustment of some of the parameters can detract from the naturalness of the sound, the early reflections balance works well as does the control over decay time.

Where the decay change involves altering the length of the impulse response, lengthening the decay time uses correspondingly more CPU power, but there's also a clever trick (again with no explanation of how it works), where you can shorten the impulse response and still increase the RT60 without hogging extra CPU power. However it's done, it sounds good.

Being realistic, you need one of the faster computers to use convolution reverb effectively without eating up a disproportionate amount of your CPU power (though the 'efficient' version helps in this respect), and if you want to work at 24-bit, 96kHz, you're going to need a Mac G5 or a fast Pentium 4 computer. You can run convolution on a G4 at more sensible sample rates, but one decent-length vocal reverb can still eat up half your processing power. I also found that I needed to keep my Logic buffer setting at 128 samples or above, or my audio broke up.

I found IR1 easy to use, and providing you don't try to stretch the original reverb too far from its natural state, the adjustments are also very flexible. Having a wide decay time range is particularly good and it sounded natural even with fairly big changes, whereas I found the resonance control had to be used very sparingly to avoid an unnatural sound. The ability to separately control the early reflection level and tail level is also immensely useful. The more ambitious user can also modify the decay envelope shape, but for me, the main attraction of this type of reverb processor is that the results sound right without too much messing around.

The included reverb impulse responses are extremely good and cover the whole range, from intimate spaces to caves and cathedrals. They also encompass some very useful hardware reverb presets. You don't get nearly as many as with something like Emagic's Space Designer, but then you have a little more in the way of control to help make up for that. Also, the 'real' studio rooms are absolutely superb for processing drums and other acoustic instruments to give them space and to help them sit in a mix without washing them out in reverb. Until you've heard the effect of a good convolution reverb on a drum kit, you might never realise how good a close-miked kit can be made to sound!

Now that Logic users automatically get Space Designer with Logic Pro, they may not feel the need to add IR1 to their collection, but the extra tweakability might still win some of them over. Some Mac owners might even be tempted to move to Logic Pro instead of buying IR1, as they're the same price! Whatever your host software, however, you should look at it very closely, as the ability to manipulate the acoustic environment in such a realistic way can make a world of difference to the quality of your recordings.

Waves have introduced some genuine innovations into convolution reverb, giving the user almost as much control as with a conventional synthetic reverb unit.