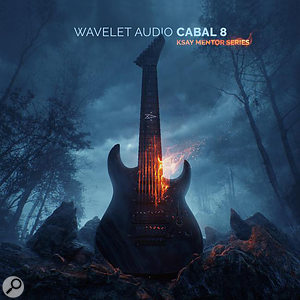 Hosted by the full version of NI's Kontakt, Cabal 8 comprises three sampled eight-string guitars designated Clean DI, Hi-Gain and Crunch. These are paired with Audio Assault's Bulldozer plug-in, loaded with custom presets. While the instrument is capable of extremely detailed MIDI parts via its articulation switching and picking choice of up or down strokes, it is also well suited to instant gratification when you need fast results.

The sounds start life as clean DI guitar samples which are then processed to fit pretty much any genre and there are numerous options for customising the sound. It is also possible for the user to fine-tune how incoming MIDI data is processed, to disable specific strings, to custom tune each string, to add pitch glide and to EQ either the whole instrument or individual strings. A keyswitch mode also allows the user to adjust the string selection for each note.

For normal playing, Poly allows you to use as many strings at once as you require, though there is also a Mono mode added for performing fast monophonic parts such as solos. For the ambient music aficionados out there, an Infinity Mode disables the note release so that, once triggered, a note keeps on playing until the end of the sample unless a new note is played on the same string, so the sound dies away naturally.

There are two play modes: Velocity Switch, where the articulation of the note being played is determined by velocity, and Key Switch, where velocity now controls which string a note will be played on, leaving Articulation to be controlled using five keyswitches below the normal range of the instrument. As you might expect, the mod wheel controls vibrato but can be used to control both frequency and amplitude. Pitch-bend controls portamento effects, which can include slide, scrape and fret noises, with slides up to one octave being possible. There's a fair bit more to the detailed real-time performance controls, but without reproducing the entire manual it would be impossible to cover it all in a review.

To create authentic-sounding lead guitar parts takes some skill in managing the articulations, pitch-bend and vibrato, though solid rhythm work is less challenging. The sounds themselves give no cause for complaint, although I'm never entirely convinced by sample-based guitars playing solos as the 'real' instrument is so responsive to how notes are picked or strummed. For chugging chords or heavy riffs, though, Cabal 8 does a fine job, and the more effort you put into handling the various real-time controls, the more authentic it sounds. If you need to add some weighty guitar work to your compositions, Cabal 8 is a very solid option.