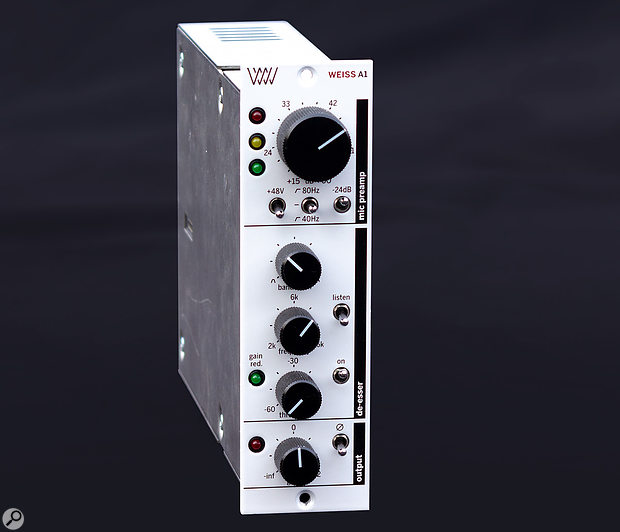 Swiss manufacturers Weiss Engineering are known for very high-quality digital audio processors that are intended mainly for the professional mastering and high-end hi-fi markets. Their product line includes stereo A-D and D-A converters, a sampling frequency converter, a combined de-noiser, de-clicker and ambience digital processor, a seven-band equaliser and a dynamics processor with de‑esser. The latest addition to the fold is not only the company's first foray into the buoyant API 500-series modular market, it's also the first Weiss product to have only analogue inputs and outputs!

The new A1 is a combined microphone preamp and de‑esser in a 500-series single-slot format, built to the exemplary standards and with the advanced technology we've come to associate with Weiss. Of course, digital technology has not been eschewed altogether; the side-chain control is done with a digital signal processor (DSP) for supreme accuracy and precision, and the gain-controlling element is an MDAC (see below).

Housed in a fully screened module, the A1 has a substantial, white-painted front panel with small but clear black markings and control legends. The module requires up to 150mA of current from the standard 500-series' ±16V power rails, which I assume to be a total figure, rather than per rail. (The original API spec allows 130mA per rail, but most racks are capable of far more these days.) In any event, I used the A1 in an old API 'Lunchbox' rack without any problems.

The preamp's gain control is a large, black rotary switch, with 3dB steps between +15 and +60 dB. A trio of LEDs alongside indicates the output level: a green 'signal present' LED illuminates at -19dBu, an amber LED lights at +1dBu, and a red LED comes on at +18dBu, although the unit has a generous headroom margin as the maximum output level is a whopping +27dBu.

Below the gain control are three miniature toggle switches. The first activates 48V phantom power — although there is no warning/status lamp — and the last introduces a -24dB pad, allowing the A1 to accept line-level inputs. The maximum input level with the pad is higher than the +26dB range of my Audio Precision test set; the specifications claim a massive +29.7dBu.

The middle toggle is a three-position type which controls an active second-order (12dB/octave) high-pass filter with three turnover frequencies of 80, 40 or 5 Hz. Whereas many designs allow the filter to be bypassed completely, it remains in the signal path at all times in the A1, but the 5Hz option is effectively the bypass mode, with no audible effect on the input signal.

Jumping to the bottom of the panel, a rotary output fader provides unity gain at the 12 o'clock position, and +12dB of additional gain when fully clockwise, offering 72dB of preamp gain in total, if required, and allowing fine-trimming when matching channels for stereo mics. It also fades out completely at the fully anti-clockwise end. Another miniature toggle inverts the output polarity, and a red LED illuminates at +24dBu, 3dB below the actual clipping level.

Lundahl transformers are used for both input and output connections, and the output driver is designed with a high current capability in addition to its high maximum output level. As the output fader comes before the output driver and its transformer, deliberately saturating the output transformer is practically impossible — at least, not without massive output levels! The input impedance is normally 8.4kΩ, falling to 2.8kΩ if the pad is selected, and the input amplifier is a discrete Class-A circuit with a current-feedback architecture that is claimed to be a state-of-the-art design. It has certainly been carefully optimised for very low noise and wide bandwidth at all gain settings, and has superb distortion performance, all backed up in the technical specifications and graphs included in the excellent user manual.

The EIN figure is around -128dBu at all gains above 35dB, which is within 3dB of the theoretical level for a 150Ω source impedance. Most preamps can only achieve this kind of performance at the very highest gain settings, so to maintain that EIN figure down to +35dB gain is a very impressive result. This is a quiet preamp by anyone's standards.

The EIN figure is around -128dBu at all gains above 35dB ... a very impressive result. This is a quiet preamp by anyone's standards.

Returning now to the de‑esser section, its audio signal path is fully analogue, but the side-chain processing entirely digital. The gain-control element obviously has to respond to a digital control signal, and an MDAC (a Multiplying D-A Converter) is employed for that purpose. MDACs are increasingly being used in digitally controlled analogue audio applications, especially where very low noise and distortion are important, for example in analogue console fader-automation systems and sophisticated dynamics processors. Naturally, the gain of the MDAC only changes when the digital code changes, so the sample rate is vitally important. In the A1, the side-chain DSP operates at a sample rate of 500kHz to ensure extremely high accuracy and very low latency.

The de-essing system in the A1 employs a subtractive configuration — the unwanted sibilance is subtracted from the input signal — which gives a better result than attenuating a restricted bandwidth of the source audio directly. To achieve this, the output from the preamp's gain stage and high-pass filter is split in two, with one part going directly to a mixer within the output driver. The other part is passed through an adjustable band-pass filter (to select the appropriate part of the spectrum for processing) and the MDAC. The output from the MDAC is buffered with an inverting op-amp and then passed to the mixer, resulting in subtraction of the unwanted part of the signal, the depth of subtraction being determined by the attenuation of the MDAC. Less attenuation means stronger de-essing.

Three rotary controls are provided in the de‑esser, along with two toggle switches, and an LED as a simple gain-reduction meter. The lowest knob adjusts the Threshold value, above which the gain-reduction processing is applied. The default settings for ratio, attack and release times are 1:3, 400µs and 30ms, respectively. (See box for more on this.)

Two more knobs control the Frequency and Bandwidth of the signal passed through to the MDAC gain-reduction element. The centre frequency can be adjusted between 2 and 16 kHz, while the bandwidth spans roughly 0.5 to 2.0 octaves (Q=3 to 0.6). These controls work in concert to 'tune in' the offending sibilance with remarkable precision. The amount by which the sibilance is reduced is then determined by the Threshold control.

To further assist in identifying which parts of the spectrum are to be de-essed, one of the toggle switches provides a 'listen mode' which effectively mutes the direct path so that only the selected sibilance element is heard. The other toggle disables the de‑esser section's digital side-chain and applies full attenuation to the MDAC, muting the processed signal path.

For stereo operation, a second A1 module can be linked to the first — both mechanically and electrically — using supplied metal plates and a header cable which plugs into a socket in the underside of each chassis. In this linked mode, the controls of both units should be set to the same values so that both side-chains respond in the same way. The highest gain-reduction requirement derived from either side-chain is applied to both MDACs to ensure a stable stereo image.

The A1 is a delight to use as a preamp, not least because of the accurate 3dB steps on the gain switch which neatly avoids the common problem of gain-bunching at higher settings. I would have liked some kind of warning indicator for phantom power, but it's not really a deal-breaker. Although useful when recording high-output mics on loud sources, the pad also allows the unit to be used with full line levels. This makes the A1 useful as a de‑esser during mixing as well as when recording, which is a very welcome bonus.

I found the A1 to be extremely quiet, with a very wide bandwidth and a great deal of headroom. Transients are precise and natural, bass is well extended, and the mid-range is detailed and crystal clear with that 'larger-than-life' focus or '3D' quality that only the best preamps possess. For the extremely picky, there is the barest hint of 'transformer iron' in the sound, due to the low-level (around -70dBu) presence of some low-frequency harmonic distortion, but for all practical purposes this is a very transparent preamp indeed. I only noticed the hint of character in a direct comparison with my (transformerless) GML8304 preamps, and the A1 is certainly playing in that kind of ultra-high-quality league.

As a de‑esser, the A1 is equally rewarding to use, assisted greatly by the ability to audition just the portion of spectrum being selected for attenuation. I found the quickest technique was to dial the Threshold right down to its -60dB setting for maximum effect, switch to the Listen mode to hear only the portion of signal being processed, and then juggle the frequency and bandwidth controls to isolate just the unwanted elements. Disengaging the Listen switch reveals the de‑esser in action, and the Threshold control can then be raised to provide just sufficient attenuation to control the sibilance without unwanted side-effects. It's actually quicker to do than to read about, and the results are very effective. I've referred to tackling sibilance throughout this review, but actually a de‑esser is useful on a great many other sources — basically anything that has strong high-frequency elements that would benefit from some dynamic taming, including drum busses, electric guitars, string sections and more!

As might be expected from Weiss Engineering, the A1 is a superbly engineered product, both physically and in its design and implementation. And, as you might also expect, this is a phenomenally expensive 500-series module! To be fair, though, it performs superbly as a preamp, and there's then an equally excellent and effective de‑esser thrown in. Yes, this is going to be one for those with very deep pockets, who demand only the very best — but they certainly won't be disappointed!

There are countless preamps and several dedicated de‑essers available from different manufacturers in the 500-series range, but I can't think of another integrated preamp/de‑esser in this format, and few other preamps can match this level of quality. I'm also unaware of any other de‑esser in this format offering the precision of a digital side‑chain.

As the name suggests, the MDAC is a variation on more familiar D-A converter technology. In a standard D-A converter, the analogue output signal is generated from the mathematical product of a digital code — each audio sample's amplitude value — and the converter's static (analogue) reference voltage. In effect, the sample value determines what proportion of that reference voltage should be passed to the output at each sample interval, and therefore the output signal voltage is directly proportional to the digital code, which is precisely what is required in a normal D-A application.

However, in an MDAC that reference voltage doesn't have to be a static value. Instead, the input audio signal is used as the 'reference' voltage and so the MDAC's output signal is now the mathematical product of both the input audio signal and the digital code. In other words, the amplitude of the input (reference) signal is modified according to the digital code value. This provides a digitally controlled variable-gain device, acting directly upon an analogue signal.

A cut-out on the bottom of the module's chassis reveals a set of eight DIP switches to personalise various aspects of the DSP's algorithm (I've highlighted the default factory settings in the main text). The first three switches provide eight alternative ratios (1:1.5, 1.75, 2, 3, 4, 6, 10 or 1:infinity), two more adjust the attack time (0.1, 0.4, 1.6 or 6.4 ms), and the next pair the release time (15, 30, 60 or 120 ms). The final DIP switch disables phantom power completely, which might be advantageous if the preamp is always used with ribbon mics or line-level sources.