Supplied as a downloadable Kontakt instrument that needs the full version of Kontakt (5.8.1 or higher), Northern Lights has at its core a library of samples running to almost 6GB and holding over 970 sounds. Some of the sound sources are derived from modular synthesizers, others from industrial and natural sounds, but it is the way in which these sounds are layered and controlled that makes Northern Lights so appealing. There's no complicated editing as everything starts life as a preset that you can then adjust using just a small set of controls. 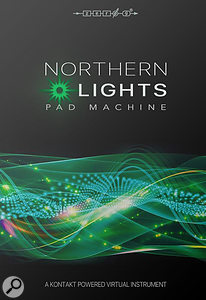 Each instrument comprises at least four layers, and all the necessary manipulation is done using just six controls for multiple 'behind the scenes' parameters, including morphing and effects. 'Complexity' adjusts the relative levels of the layered samples making up the patch, while 'Movement' modifies the sound using convolution, filtering, controllers, LFOs, envelopes and delay. The rotating mirror ball gives an indication of the amount of movement applied to a sound — and helps the GUI look pretty. The subjective effect of the Complexity control varies according to the preset instrument you call up.

'Storm' is also patch–dependent and utilises distortion/saturation, effects, controllers and LFOs to change the texture of the sound. 'Color' affects the overall tonality but it isn't just EQ or resonant filtering: it combines both of those along with convolution and envelopes. 'Attack' and 'Release' behave more predictably, though their range seems to change according to the instrument you're working on. Control–clicking on any control resets it to the default setting for the current instrument. As well as the six knobs and their functions the sounds also respond to key pressure and pressure length, so that fast notes have a different character to held notes.

The beauty of Northern Lights is that you don't get bogged down in deep editing — the six controls make tweaking purely instinctive.

There's a huge range of preset instruments arranged in categories that give some clues as to the types of sound to expect, though in reality there's often scope to reshape sounds from one category so that they'd fit quite comfortably into another. The beauty of Northern Lights is that you don't get bogged down in deep editing — the six controls make tweaking purely instinctive, and of course you can save your favourite tweaks as new user patches. I also had a lot of fun using DAW automation to vary the control settings during long notes to create smoothly evolving textures.

Many of the sounds are best played monophonically, as chords can sound too complex, though slimming down a sound using the controls can produce more comfortable pad sounds that will work as chords. I can see some of these sounds getting used in film scores, ranging from sci-fi to horror, but there's a lot of scope, from tortured metal to more peaceful, organic timbres, so there are plenty of more conventional musical applications too. Given its low cost, Northern Lights is a useful 'left-of-mainstream' instrument, but remember that it needs the full version of Kontakt and won't work on the free Kontakt player.