We look at how you can use MIDI velocity to manipulate Live and route notes to different instruments.

We tend to associate MIDI velocity with loudness — a measure of how fast your finger or hand is flying when it strikes a keyboard or drum head. On acoustic instruments, that indeed influences how loud the resulting sound is, but on electronic instruments, coming from a MIDI keyboard or pad, velocity is just a number that you can apply to volume or any other malleable parameter. This month we'll take a look at using velocity in Live to route notes to different instruments. This bears a passing resemblance to velocity switching in your favourite sampler, but it lets you velocity switch between any number of different instruments of any kind as well as to modulate the switching settings.

You can use velocity to split any note lane in a drum clip between two Drum Rack pads so that low-velocity notes play one pad and high-velocity notes play the other. The simplest way to do that is to use a Live MIDI Effect Rack's Velocity zones, as shown in Screen 1. To split a single-note lane, create two chains in a MIDI Effect Rack and set each chain's Key zone to the single note you're splitting (C1/kick drum in this example). You'll also need one or two additional chains to pass the rest of the notes to the Drum Rack. If the note lane you're splitting corresponds to the highest or lowest pad used in the Drum Rack, one additional chain will cover the rest; otherwise you'll need one for the higher pads and another for the lower pads. The next step is to use the Velocity zones in the two single-note Rack Chains to separate the high- and low-velocity notes. The velocity ranges of these zones depend on where you want the split. Don't overlap the Velocity zones unless you want some notes to play both pads, and don't leave a gap between them unless you want some notes to play neither. The last step is to add a MIDI Pitch effect to one of the single-note chains to transpose its output to the alternate drum pad (G#2/alternate kick drum in Live's Beat Tools Digi Kit used in this example.) This setup works with any MIDI clip as well as with MIDI step sequencers. 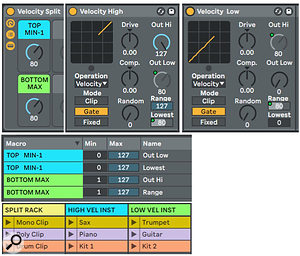 Screen 2: Macro knob assignments let you split incoming MIDI notes between two Rack chains targeting adjacent instrument tracks. Separate Macro knobs allow you to create gaps or overlaps.When you need to split more than one note lane between Drum Rack pads, you can add more chains to the Rack or you can stick with two chains and split all note lanes between two Drum Racks. In that case, the second Drum Rack would normally be a copy of the first with the pads you want to swap holding the alternate kit pieces, but you can also use entirely different Drum Racks. One nice thing about this setup is that you can actually use it for swapping any instruments, not just Drum Racks.

The first step in converting the single-note split Rack to an all-note split Rack is to expand both C1 Key zones to the full key range. Also delete the Pass-thru chain, because all notes will now pass through one of the other two chains. You can use a Pitch effect after the Velocity effect in either chain to target different Drum Rack pads, but when you're swapping typical 16-pad Drum Racks starting on the C1 pad, you won't need to. Next, load each of the targeted Drum Racks onto its own track and, as before, set that track's input to come from the Post FX or the Post Mixer output of the appropriate chain of the Split Rack.

On electronic instruments, coming from a MIDI keyboard or pad, velocity is just a number that you can apply to volume or any other malleable parameter. 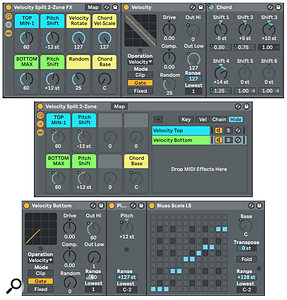 Screen 3: Chord, Pitch and Scale effects added to a velocity-split Rack.When you're swapping instruments instead of Drum Racks, it's easy to confuse velocity splitting with pitch splitting and then to use high- and low-pitched instruments respectively on the high- and low-velocity tracks. But, any pitch might be sent to either track, and the same pitch might be sent to both tracks at different times (or at the same time if the zones overlap). In short, pick instruments for their different sounds, not for their pitch ranges. Velocity splits work equally well with polyphonic clips and sequencers, and if things start to get busy, setting the high-velocity minimum above the low-velocity maximum can thin things out. You might also automate or modulate these knobs to make the parts more or less busy as the song progresses.

When you want more than two Velocity zones, the best approach is to duplicate the velocity-split Rack and insert the copy at the end of either or both of the original Rack's chains. That splits the original zone in two, so the new Rack's high and low settings need to be within the original zone to have any effect. It might seem simpler to just add chains to the original Rack, but because the Velocity effect's Range is the zone's size, not its boundary, the settings get tricky.

Here are 10 ways to get more out of your clips and sequencers with velocity-split Racks.