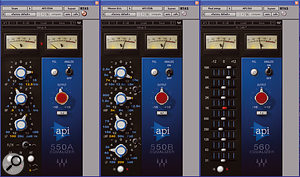 The API Collection includes three EQ plugins modelling the 550A, 550B and 560 hardware units.Automated Processes, Inc. pioneered some key technological breakthroughs in the recording industry, including computercontrolled mixer automation and the use of VCA technology. Their '60s and '70s desks are revered by many engineers, and more recently their clever modular Lunchbox system has become a de facto standard for many manufacturers of outboard gear.

Software emulations of API hardware have appeared before, but the Waves API Collection is the first officially licensed plugin bundle based on their designs. Four plugins are included; three are based on classic API EQ modules, while the fourth emulates the 2500 stereo compressor, which was reviewed in its hardware incarnation in SOS October 2001 (endpoint29cc8e70.chios.panth.io/sos/Oct01/articles/api2500.asp). As ever, they are compatible with all of the common plugin formats, and can be used in mono and stereo tracks. All the usual Waves features are implemented, such as the ability to switch between 'A' and 'B' settings for comparison purposes.

API's EQ module circuits boast several distinctive features. All make use of the company's own 2520 opamp design, which is said to offer huge headroom and forgiving performance even at extreme cut and boost settings. They also implement socalled 'proportionalQ design'; there is no independent user control over the width of each EQ band, but it shifts automatically from a broad, gentle curve to a sharper peak or notch as the amount of cut or boost is increased. Finally, of course, there are the company's characteristic dualconcentric rotary knobs, which save panel space by putting frequency and gain controls on top of one another.

The three EQ modules emulated here are all still available in hardware as part of the Lunchbox range, although the design of the 550A and 560 dates back to the late '60s. The former is a threeband design with stepped frequency and gain controls. The two outer bands can be switched between peaking and shelving responses. The 550B is an updated version of the same design which adds a fourth band of equalisation, while the 560 is a 10band graphic EQ.

The plugin versions mimic the front panels of the Lunchbox modules almost exactly. The dualconcentric controls of the 550A and B don't lend themselves particularly well to being adjusted by mouse, so Waves have sensibly made it possible to position them by clicking on the blue (frequency) and white (gain) legending around the outside. Other than the controls that switch the outer bands between peaking and shelving responses, that's pretty much it, as far as controls go. This is not the kind of plugin that really requires presets, although Waves have supplied lots of them!

I've long been a fan of URS's ASeries plugin EQ, which is obviously modelled on the API 550B, so I was interested to see how the Waves' official, licensed version stacked up against it. In terms of the usability of the plugin interface, I'd award a points victory to Waves: the distinction between frequency and gain selectors is clearer in their plugin, and you don't find yourself moving the wrong one by accident. On the other hand, Waves' prettylooking virtual VU meters are arguably less informative in a digital context than URS's plain bargraph meters. The most important functional difference between the two is that URS's gain controls can be moved in increments of 0.1dB, while Waves' retain the 2dB steps of the original. In this respect I think I prefer the inauthentic approach; unlike many plugin EQs, a 2dB step in cut or boost can make a huge difference to the sound, and it's nice to have the intermediate settings.

Ah yes: the sound. As I just mentioned, these Waves API EQs are not like stereotypical digital equalisers. The effect of even the smallest cut or boost is immediately obvious on any source, and although a maximum gain change of 12dB either way might seem modest compared to many plugins, it certainly doesn't sound that way. These are not what you'd call transparent equalisers; instead, they impart a substance and richness at the low end, while midfrequencies are dealt with in a punchy and aggressive fashion, and a highfrequency shelving boost delivers something thicker and more substantial than your typical 'air'. API's original choices of stepped frequency settings work as well now as they did in the late '60s, and I never found myself wanting more choice.

As you'd expect, the 550A and 550B plugins share a common character, but they don't sound quite identical. In fact, even with all bands set to 0dB cut and boost, the two plugins don't null, either with one another or with the unprocessed signal. On some sources I almost managed to convince myself that 550A recreated the mysterious 'analogue magic' that can happen when you pass signal through nicesounding hardware even with the controls set flat: the output just seemed a hair livelier and more exciting than what went in.

Returning to the comparison with URS's ASeries EQ, the same character is evident. When I matched the settings, I often found the Waves plugins a touch brighter, but I'm sure that if you put two 40yearold hardware units alongside one another you'd notice comparable or greater differences. In short, I'd be more than happy to use either, or a combination of the two; for a few applications I'd probably have a marginal preference one way or the other, in most cases not. Both, incidentally, are impressively light on CPU resources.

The other main component of the API Collection is an emulation of the 2500 stereo compressor, which is not itself a vintage unit, although it does incorporate technology from earlier API designs. When Hugh Robjohns reviewed the hardware version some six years ago, he praised its flexibility and superb sound quality, and the plugin version likewise sounds great.

There are the usual Threshold, Attack, Ratio and Release controls; the last three of these are stepped, but turning the Release control to its fullest setting introduces a second, continuously variable Release knob, which is otherwise greyed out. This arrangement seems a bit odd, but is faithful to the original. The Threshold control retains the original's calibration markings of +10 to 20 in dBu, which is also a bit weird for those of us used to typical digital compressors, although you soon get used to it. Makeup gain can be applied automatically or manually.

The 2500 owes its reputation for flexibility to some less familiar controls located in the Tone section. As well as selecting between hard, medium and softknee compression curves, you can also insert a choice of two highpass filters into the sidechain, thanks to a circuit API call Thrust. Unlike the sidechain filters in many compressors, these don't just roll off frequencies below a certain value; they apply a 'tilt' to the entire frequency spectrum. You can also choose whether the detector element is fed directly from the input signal ('feed forward') or from the gainreduced signal ('feedback'). Finally, there's the unique option to have varying amounts of stereo linking between channels; not only can you set a percentage degree to which levels in one channel affect the other, but you can insert filters so that, for example, bass notes in one channel will only compress that channel, but peaks higher up the spectrum will compress both channels. 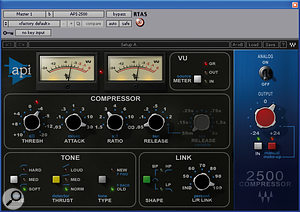 In the short time I've used it, the Waves API 2500 has become my first choice as a mix compressor. Some mixes just seem to lend themselves to being compressed, and you feel that almost any dynamics processor will do an adequate job. API 2500 does a far more than adequate job in these cases, but where it really shines is in more difficult situations. There are mixes where you don't really want to resort to multiband compression, but where stereo compressors just seem to lurch between pumping queasily and sucking all the life out of the track. It's with these tracks that API 2500 really earns its stripes: it just seems to have the capability to put things in their place so that nothing leaps out obtrusively, but the punch and impact of drum beats is retained.

The Tone controls, in particular, make a profound difference to how 2500 responds. With a slow attack, 'normal' Thrust and 'Old' (feedback) tone Type, a drumled mix will kick like a mule, but even settings that would result in bland smoothness on other compressors can produce a forward, inyourface excitement here. It's almost as though you can pick out different elements of a mix and use them to drive the compressor. You can use external sidechain inputs in the RTAS and TDM versions, and my only regret as far as bus compression is concerned is that there is no programmedependent release setting, but there isn't one on the hardware 2500, so it's hardly surprising that Waves haven't added one.

As you might expect, API 2500 also makes an excellent dynamics processor for individual sources. Again, it excels on things that trouble other compressors, such as very dynamic or tonally inconsistent vocal takes.

At #1463$2000 for the TDM versions and half that for the nativeonly option, these are not cheap plugins, and if you're only interested in having an APIstyle EQ, URS's ASeries parametric EQ is more affordable at $500 (TDM) or $250 (native). In my opinion, however, the 2500 compressor is an absolute standout product. It's up there among the very best compressor plugins at any price, and if you're willing to pay for quality, it should be high on your list of things to try out.

Like their earlier counterparts in the SSL range, Waves' API plugins all have an 'Analog' switch. According to the manual, this adds noise and harmonic distortion that replicate the imperfections of analogue circuitry, at the cost of a slightly increased CPU load. I found the effect absolutely undetectable in normal use, and even when I nulled the plugins against one another, the added noise was completely inaudible at anything like normal listening levels. I guess you wouldn't expect a welldesigned piece of highend analogue circuitry such as an API unit to add obvious noise to your signal, so this is probably realistic, but I could live without it.

The API Collection exemplifies everything we've come to expect from Waves. These plugins are not cheap, but they make no compromises on quality.