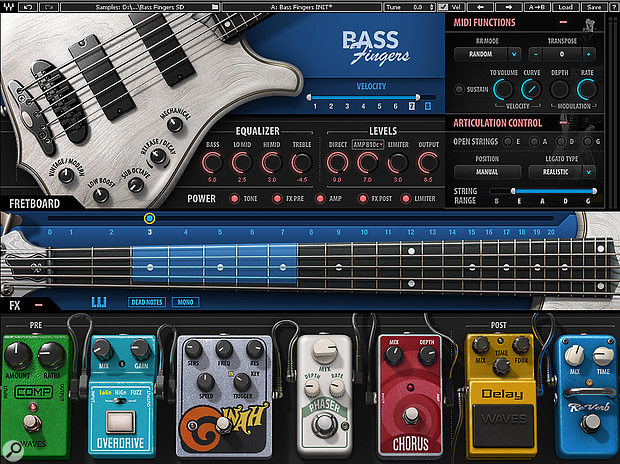 Hyperrealism is the order of the day with Waves' new virtual bass instrument.

There's more than one way to skin a cat, as the saying goes, and this is as true for virtual bass instruments as any other. Waves' foray into the Stygian depths of harmony goes by the mildly euphemistic name of Bass Fingers. The Bass part of the name is obvious: the Fingers part refers to its fingered playing style, as opposed to picked or slapped. Bass Fingers (BF for short) is a deeply sampled five-string electric bass of unspecified make, hosted in Waves' own bespoke (and visually attractive) engine. BF includes many of the characteristic noises and artifacts of bass guitars crucial to a realistic performance; as with other virtual bass VSTs these are triggered by the familiar combination of keyswitch commands, MIDI controllers and approach to playing the keyboard. A lot of attention has been paid to the way bass players approach fret position and voicing — BF has its own ways of dealing with this, which will be discussed in due course.

On firing up BF, the default INIT preset sounds terrific straight out of the box — solid and unapologetically up‑front. A quick rummage through the supplied presets reveals an impressively broad range of tonal possibilities from this bass. Regarding BF's tone sculpting abilities, there are three main areas where this takes place. Firstly, five knobs on the body of the guitar determine the initial sound. The first three knobs can be bypassed with the Tone on/off button for the purest sound. When active, they behave as follows: fully anti-clockwise, Vintage/Modern produces a full tone, focused on the low mid-range. Turning clockwise progressively scoops out that mid-range giving a wiry sound, but still with a strong bass presence. Low Boost does exactly that, emphasising frequencies around 100Hz. Sub Octave is the equivalent of that bass players' favourite, the octave divider pedal, adding a parallel octave beneath the main sound, sure to delight fans of Tony Levin. Unlike octave dividers, there is no glitching or mis-tracking here, and it even works polyphonically — try that with a stompbox! Release/Decay offers a choice of key release samples; negative values increase the level of note-stop noises created by the picking hand, positive values increase the level of stopping noises made by the fretting hand. In the 12 o'clock position they are both silent. You cannot have both at once, however the knob is assignable to a MIDI controller, as are most things on BF. A word of caution: beware of having these unnaturally loud — they can be very distracting! Finally, the Mechanical knob adjusts the volume of random 'string brushing' noises in between notes. It's fairly subtle, and when set to a realistic level is likely to be inaudible unless the bass is playing solo with a fair amount of compression.

Next in line are five stompbox style Pre-FX: a standard Compressor with Amount and Ratio; Overdrive with Mix, Gain and three types of drive; Wah (auto or manually controllable via MIDI); Phaser with Mix, Rate and Depth; Chorus with Rate and Depth. These are arranged in the order in which they might most likely occur; this order cannot be changed.

Following the Pre-FX is an EQ with four fixed Bass, Lo Mid, Hi Mid and Treble bands. This feeds into an amp simulator offering four bass amp/cabinet IR responses (although the manual claims six) with separate volume controls for direct and amp signals. A Limiter allows the volume to be further boosted without clipping.

The signal then passes to two Post–FX: Delay with Mix, Feedback and Time controls — delay time can be free-running in milliseconds or in sync with your host tempo to a wide range of note values. The Reverb provides a lovely warm ambience with lots of internal movement, offering Mix and Time controls, with a maximum decay time of 10 seconds.

On firing up Bass Fingers, the default INIT preset sounds terrific straight out of the box — solid and unapologetically up‑front.

At the basic level, you could just load up BF and play using the default settings. However, understanding how fret position and string range affect string selection, tone and legato (hammer-ons and pull-offs) is the key to getting realistic results and the widest range of tones.

Figure 1. The yellow lines (my additions) show the available strings in position 0.

To illustrate with three examples: at position 0, B0 to D#1 will play on the low B string; E1 through to B2 will play within the blue area, changing to the next string when reaching the 'area limit'; all notes from C3 upwards will play on the top G string (see Figure 1).

Figure 2. In position 12, the E string covers the whole range from E0 to the top of the blue area at G#2.

In this second example positioned on the 12th fret (see Figure 2), the E string is used wherever possible, then the blue area takes over; C4 and upwards plays on the G string. In Figure 3, the E and G strings are skipped, so if we're positioned on the seventh fret the B string plays up to G#1 until the A string is able to take over up until B2. Again, notes falling inside the blue area do so, then everything from D3 upwards is restrained to the D string.

Figure 3. In position 7, the E and G strings are skipped (note the String Range indicator at top right) so only the B, A and D strings are used.

All this flexibility would be useless if you had no means of controlling fret position and string range other than with the mouse — after all, you're fairly unlikely to stick with one fret position throughout a song. Cue the fret position's 'Adaptive' (ie. auto) mode, which does its best to follow you around the fretboard as you play. It tracks upward movements quite faithfully, but less so when moving back down; big jumps from high to low tend to leave the fret position trailing high until BF 'gets the message' that you're playing low again. Thankfully, both fret position and string range can be assigned MIDI controllers via the good ol' right-click MIDI learn method. In this way you have full control over string selection, which is not only important for ensuring that the position is correct for playing legato, but also for getting the desired tone according to the played pitch. B2, for example, can be played in four different positions, with dramatic differences in tone.

Whilst BF's positioning and string selection methods are thorough, they do take a while to get used to, and would be difficult to control accurately in real time, so are best managed in a sequencing scenario. I miss the ability to 'force select' strings with a simple keyswitch (as on Scarbee's basses), which negates the need to take fret position into consideration.

BF does indeed have a large variety of keyswitchable actions. Clicking on the small keyboard icon brings up the keyswitch editor (Figure 4), an octave-long keyboard graphic showing the actions triggered by each key. These are customisable; clicking on the small arrow above or below a key invokes a drop-down menu, containing 10 categories of action, with a total of 72 possibilities. These include all 20 fret positions, mute and dead notes, slides, legato behaviour, scratches, squeaks — too many to list in detail. Given that number, I confess to being disappointed (and baffled) by Waves' decision to provide only 11 keyswitch locations — it's nowhere near enough. I have to draw comparison with Musiclabs' supremely flexible system found on their VST guitars, which provide around 33 customisable keyswitches. 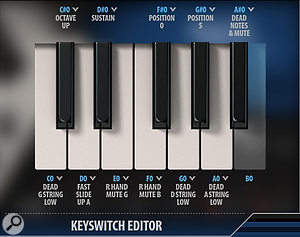 Figure 4. The Keyswitch Editor, with eleven actions assignable from a total of 72 possibilities.I also have an issue with BF's implementation of string slides. These are triggered by keyswitches, but we are only offered fast or slow pre-recorded octave slides either up from or down to each open string. There are no legato slides possible from one specific note to another, so if you want to slide from C3 to G3 (or vice versa) for example, you're out of luck. This is a huge restriction, as effective bass parts rely on that fluid mobility.

Capping it all off is the MIDI Functions section. This provides Round Robin options, Transpose with a +/- 24 semitone range, a Velocity to Volume control, and a knob to adjust the velocity curve to match the response of your keyboard. Vibrato (pre-assigned to CC1 but also reassignable) has depth and speed controls. To the left of the MIDI Function area is an eight-position Velocity slider representing BF's eight dynamic layers. By adjusting the upper and lower ranges, BF can be forced to restrict the velocity layers to those within the blue range — very useful in combination with the Velocity to Volume knob when you need a less dynamic, more consistent tone.

As impressive as the range of tones BF can produce may be, I'm rather less enamoured by the gripes mentioned previously, and the restrictions to the full range of expression and performance detail they impose. Nevertheless, BF is priced very favourably compared to some other bass VSTs, and its sound is ultimately what will earn it a loyal fanbase.

Installation of Waves products is done through their Waves Central app; from there, your licenses can be managed and activated. Once the product appears, three items show up: the BF program, an SD library (2.23GB of 44.1/48kHz samples) and an HD library (15.58GB of 88.2/96KHz samples). Either or both can be installed. I went for the SD version for this review, but you do need to install the program as well or you'll just have a folder of samples with nowhere to go. That sounds blindingly obvious, but the app's visual layout presents things in such a way that is not entirely clear.

An excellent-sounding virtual fingerstyle bass with a vast tonal range and many realistic touches, but hampered by the lack of legato slides and too few keyswitches, restricting access to all its features.