Telefunken's ELA M 251 is considered by many to be the Holy Grail of vocal mics — but at 10 grand a pop, owning one is a mere aspiration for most of us. Enter Warm Audio...

The Telefunken ELA M 251 is one of the all-time classic vocal microphones: the sort of thing that you might, if you're lucky, get to try one day — or if you're even luckier, to own. However, a microphone worth £$10,000 or more is a huge luxury and, let's face it, well out of the financial grasp of most of us. Warm Audio are offering a more practical alternative in their WA‑251, the latest entry into their catalogue of affordable products inspired by high-end, high-priced audio equipment.

The Telefunken company has its origins in early-1900s Germany. They originally worked alongside Neumann, notably distributing the U47 in the USA, but when Neumann decided not to renew their contract in the 1950s, Telefunken began working with AKG. Soon after, the ELA M 251 and 251E were born. Both employed AKG's CK12 capsule and a Haufe T14/1 output transformer, but the 251E (for 'export') used a 6072 valve in place of the less widely available AC701k. The microphone was originally only in production for a few years from 1959, and has since reached iconic status. As these original microphones have become rarer the price has skyrocketed, and they now fetch eye-watering figures when they do come up for sale.

After decades of silence, the Telefunken brand was reborn in the 1990s, and today they manufacture a faithful reissue of the original ELA M 251E. As you would expect, this microphone comes with a suitably extravagant price tag (around the same as a vintage original), so, again, it's a major investment for any studio or individual. So if Warm Audio have made it possible for us to experience its qualities for a fraction of the price, their WA‑251 will have an unbeatable USP!

Warm Audio were started 'in the garage' in 2011 by Bryce Young, out of a desire to manufacture sonically high-end products that are also affordable. In their own words, they manufacture homages to "popular coveted pro-audio equipment", and they now market an extensive roster of preamplifiers, microphones and outboard equipment. Warm's current range includes the WA‑73, inspired by the Neve 1073 preamp; the WA‑87, based on the original Neumann U87 mic; the WA‑76, designed to recreate the sound of the UREI 1176 compressor, and many more. All the Warm Audio equipment that I have been lucky enough to use has performed really well sonically, but I have to say that sometimes the look and feel of their gear can fall a little short of the mark for me. I understand that spending more money on the electronics and components and cutting costs elsewhere can help to make great–sounding affordable equipment, but hopefully not to the point of having the resulting gear look cheap! I do realise that not everyone will care about looks, but working in a studio, I want my clients to get a feeling of quality from the equipment we are using. First impressions can be important in making clients feel comfortable.

The WA‑251 system comes in a fairly large cardboard box. This, in turn, contains the microphone (in a wooden case), power supply, shockmount and seven-pin XLR cable. Many of the components used in the original 251 are no longer manufactured, and NOS parts are also thin on the ground, so creating and mass–producing a microphone that tries to achieve a similar sonic quality to the original Telefunken must have been a difficult task. The capsule is Warm Audio's own WA12-B-60V, which is said to capture "all the smoothness, rich top end and warm vintage sonics of the original CK12 capsule", though it's not clear how closely they have recreated this notoriously difficult-to-copy item. The tube is a Slovak Republic JJ 12AY7 and the output transformer is supplied by CineMag USA.

The microphone is long and slender, with a cream–coloured body and a chromed metal grille. It's somewhat similar to the original ELA M 251, but the finer details of the design leave a little something to be desired, and its low cost was apparent when I put it up next to our Neumann U87 or Blackspade UM17R. The WA‑251 is one of the more expensive microphones in the WA collection, and I have to say that I'd expect a microphone that costs the best part of a grand to have a more expensive look and feel, even if it is £9000 cheaper than the microphone it is replicating.

The cradle uses a toggle latch-type mechanism, which holds the microphone firmly. I do like this type of cradle design, as it is quick and easy to use and allows the microphone to be easily manoeuvred into position.

In my experience, whatever Warm Audio products may lack in design finesse and finish quality they make up for in sound quality. Aesthetics aside, the microphone sounds really great, and I easily found uses for it in every session during the review period. In general, I experienced the sonic character as having a tightly controlled low end with a slight lift in the upper mids and high frequencies, giving it a bright but smooth sound.

The frequency responses of the three polar patterns are useful and quite distinct. Cardioid mode has a slight boost around 200Hz. It gradually rolls off below this frequency, and then more steeply from around 50Hz. There's also a slight boost between 2-5 kHz and again at about 10kHz, with a dip inbetween. This gives the sound clarity and gently pulls the source forward.

The figure–8 pattern rolls off more quickly below the 200Hz bump. There is a more noticeable upper boost centred around 5kHz, and the highs roll off quite significantly above this frequency. The mids seem nicely focused in this pattern; it sounded smooth without harshness, which is ideal for mid-range-heavy sources such as electric guitar, as well as for room–mic duties.

In omni, the mic has a much flatter response between 50Hz and around 12kHz, but still retains its high-frequency smoothness. Again, this mode was useful when the WA‑251 was set up as a room mic, as well as for adding a slight 'air' and ambience to close–miked sources.

There is no denying that this microphone sounds great. It is smooth and rich, performed well in my tests and it stood up well against far more expensive microphones. 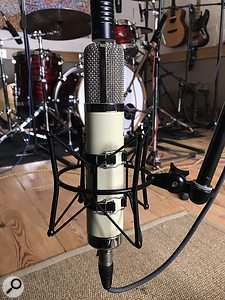 Photo: Matty MoonI will often use room mics when recording drums; I find that blending in a mono room mic can help create some 'air' around the kick and snare in the centre of the mix, and glue the drum sound together. I set up the WA–251 about three feet in front of the kick drum, slightly off to the floor–tom side of the kit, where it sounded most balanced when listening in the room. Playing around with the polar patterns, I quickly settled on figure–8 and pointed the null at the drum kit. This gave a nice balanced room sound, with the rolled-off lows and highs suiting this role. The low end was tight-sounding, adding fullness to the drums but without the kick becoming too flabby and sub-heavy. The highs were impressively smooth without being harsh, particularly during heavy crash–cymbal sections. I found that it took compression well and that I could have the room mic up loud in the drum mix without the cymbals becoming too pronounced and harsh.

Whilst working on a live recording with a rock band, I used the WA–251 on a bass amp. We got a nice gritty distorted tone using a ProCo RAT 2 into a Traynor YBA-1A Bass Master amplifier with a 2x15 cab. The WA–251 was placed about 4-5 inches off the grille, slightly off–axis from the centre of the speaker cone, and used in cardioid mode. The low end worked really well here. I found that I could push the lows on the amplifier without the sound getting too 'woofy', while the mids and high-mids still had definition and clarity without the sound getting too aggressive or 'spitty', which I find can often happen with distorted bass. 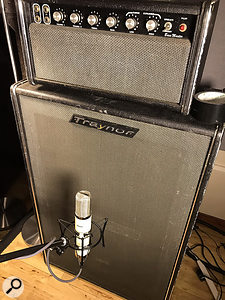 Photo: Matty MoonThe ELA M 251 is famed for its use as a vocal microphone, so I hoped the WA–251 would really shine in this area. There are a handful of microphones in our mic locker that I love on vocals, and I was very keen to try the WA–251 against my favourites.

Over a few sessions I tried the WA–251 on both male and female vocalists, and put it up against a Blackspade UM17R and a Flea SuperFET 47. The WA–251 again did an excellent job. It sounded quite similar to the valve UM17R, but had a touch more mid presence and slightly lifted high mids, around 2-5 kHz. The WA–251 sounded lovely as a vocal mic: the low end was full but with clarity and the presence gently pulled the vocal forwards in a nice, natural-sounding way, as well as adding a little 'air'. This particular female vocalist had quite a lot of 10kHz in her voice, which did mean that the WA–251 sounded a touch more sibilant than the other two mics, and seemed to accentuate an occasional 'whistle' in her voice, but on the male vocalist, the WA–251 really shone. The top end was bright, yet very smooth without exaggerating sibilance. It sat well in the mix without me having to overly EQ or process the results. In general, the WA‑251's performance was very impressive, especially considering that the two microphones I put it up against both cost over twice as much.

There is no denying that this microphone sounds great. It is smooth and rich, performed well in my tests and it stood up well against far more expensive microphones. There are other similarly priced large–diaphragm, multi-pattern valve capacitor microphones on the market that also perform well and have a slightly classier look, such as the Avantone BV-12, but if you are happy with its aesthetic and are specifically after an affordable ELA M 251–type valve mic for your locker, the WA‑251 is a very compelling option.

I have prepared a number of audio files to demonstrate the WA‑251 in action, taken from the sessions discussed in the 'In Use' part of this review. For quick auditioning purposes, we've included a SoundCloud playlist of MP3 examples above but, to hear them in high quality, download the ZIP file of hi–res WAV audio files from the righthand Media sidebar (or use the link below).

Its build quality and design may make it look a little cheaper than other designs, but the WA‑251's sound compares well with microphones costing several times more.