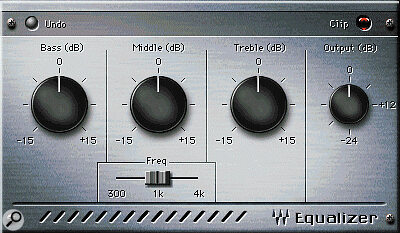 Waves are rightly renowned for their full price plug‑in suites for both Mac and PC, but can they achieve the same reputation at the entry‑level end of the market? Martin Walker wonders just how easy it is.

Despite the huge numbers of MIDI + Audio sequencers being sold, it's obvious that not everyone can afford to run many of the professional plug‑in effects available. Several companies have now launched 'budget bundles' after seeing a large potential market for entry‑level plug‑ins that provide the basic functions, but at much lower prices.

Waves have an enviable reputation for high‑quality effect plug‑ins (particularly in the case of their acclaimed Native Power Pack bundle), so their entry‑level package was eagerly awaited. Mind you, there is some understandable confusion over just what it contains. First came EZWaves, which included EZverb and Audiotrack. EZverb used the same engine as the full‑priced TrueVerb, but provided only a selection of preset sounds with no user‑adjustable controls. This was shipped in two different versions for Mac and PC, but both versions also included Audiotrack, a combination plug‑in providing 4‑band EQ, Compression, and a Noise Gate. However, the TrueVerb engine, while giving excellent reverb quality, is not renowned for its low processor overhead. Waves eventually decided to launch a completely new bundle, which is what is under consideration here.

The EasyWaves bundle now comprises three completely new plug‑ins: EQ, Reverb and Compressor. The graphic front panels are now identical for Mac and PC, and the algorithms are specifically designed for low processor overhead (EZWaves registered owners can get a free upgrade to the new version). The PC version will run in Windows 95 or NT, and Waves recommend a minimum of any Pentium processor and 16Mb of RAM. On the Mac you need FPU, or a PowerPC System 7.5 or greater.

All three plug‑ins feature a basic no‑nonsense interface, with the minimum of controls. The graphics are decidedly retro, with simulated silver satin‑finish aluminium front panels and black mouse‑operated rotary knobs. Each plug‑in also has a small Undo button in the upper fascia strip, and the Reverb and Equaliser have Clip LEDs, which latch on if internal clipping has been detected (clicking on them resets the indicator). Apart from a bottom fascia strip with the plug‑in name, that's it. No presets are provided either, although you could say that doing so would conflict with the aims and immediacy of the 'fast‑and‑easy' interface. 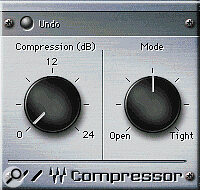 The reverb has four rotary controls: Mix (dry to wet), Reverb Time (0.4 to 10 seconds), Brightness (Dull to Bright), and Output Gain (0dB down to ‑24dB). Brightness controls the amount of high‑frequency damping, but I doubt that I need to describe the function of any of the others. Processor overhead is extremely low, at about 19 percent with my Pentium 166MHz MMX — as compared with 30 percent for the reverb from the TC Native Essentials bundle, and 51 percent for the full Waves TrueVerb.

However, overhead isn't the whole story, since the sound of a reverb is very dependent on its algorithms. Comparing the EasyWaves reverb with the others at my disposal, its sound is certainly clear, but exhibits rather fluttery and lumpy tails. In context, with music playing, it is very usable, and extremely quick to set up, but left me feeling a bit underwhelmed. Yes, it's certainly far better than Cubase VST's Wunderverb, but it is also far less versatile than the TC Native Essentials at a similar price.

The EQ plug‑in has three bands, each providing +/‑15dB of control. Bass operates below about 300Hz, and Treble above 4kHz, while the Mid Control features an additional horizontal slider for continuous frequency adjustment between 300Hz and 4kHz. Processor overhead was a low 12 percent on my machine (similar to the TC Native Essentials EQ), and the sound was full and clear even at high levels of boost, although it is fairly easy to run into distortion. I did find the latching action of the Clip indicator a bit annoying — a hold of a few seconds would be far more useful when setting up levels. Otherwise you are constantly clicking to reset it while changing the output level, and even a normalised file caused it to light up with every control set to 0dB, which seemed a bit odd.

However, the simple interface means achieving your ideal sound is particularly easy. In this respect it is much like using a normal analogue desk EQ, and many people will find this approach a lot simpler than adjusting a set of fully parametric bands.

The compressor couldn't be simpler — just two rotary knobs, controlling Compression (from 0 to 24dB), and Mode (from Open to Tight). Waves say that Mode controls the time constants (attack and release), makeup and shape of the compressor (presumably the knee) to make it sound a classic compressor at the Open end, and a limiter at the Tight end. Once again, much like the EQ, I could get a wide variety of effects very quickly, from subtle to extreme, but compared to the TC Native Essentials compressor there was much less variety on offer, especially if you want to indulge in the sort of sonic mangling that's so popular in modern music.

When I started this review I was expecting to keep referring to the Native Power Pack, but although this also features an EQ, compressor, and reverb, the similarity ends there. Waves must be understandably cagey about offending their full‑price customers by leaving in too many of the NPP's features, but I'm left in two minds about the EasyWaves bundle. At £125, it's certainly good value for money for three plug‑ins, and another attraction is the possible upgrade path to the full Native Power Pack. However, I do wonder if just a bit too much versatility has been sacrificed.

This doesn't affect the EQ so much, since many people prefer to quickly dial in values, and it does give a clear punchy sound. However, most people already have some basic EQ plug‑ins, so it is likely to be the compressor and reverb options that sway them.

In much modern dance music extreme compression and distortion are used, and this compressor doesn't offer many extreme sounds, although it is fine for general‑purpose compression. This leaves the reverb, and every musician working with a MIDI + Audio sequencer needs at least one quality reverb. Here, Waves' experience has provided a fairly smooth sound, at a low processor overhead, but perhaps this is not enough. By comparison, the TC Native Essentials pack at £149 offers a much more versatile reverb, many more EQ options, including parametric and notch options for all three bands, and the SoftSat soft harmonic distortion option, which is easier to use than watching the EasyWaves Clip indicators.

With EasyWaves, Waves set out to provide a functional design, fast operation, low CPU requirements, and a simple and user‑friendly interface. Despite my reservations, they have achieved all these things. Here, for once, is a bundle that doesn't cost a bundle.

A useful collection of budget plug‑ins for both PC and Mac that perhaps errs on the simple side.