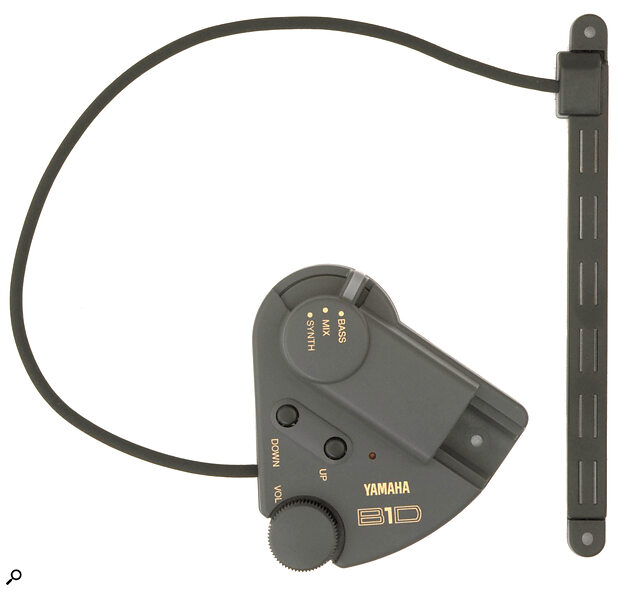 MIDI guitars have been around for years, but systems catering to bassists are far less common. Derek Johnson sets his sequencer's controls for the heart of the bass...

The technology that allows guitars to be used as MIDI controllers has seen some real advances in recent years. Among the most visible developments has been the neural net system that has evolved from research by Yamaha and German company Blue Chip. Yamaha's G50 MIDI guitar interface and G1D divided pickup has been around for some time — SOS reviewed it back in December 1996, so check that review out for full details — and Blue Chip are now producing their own interfaces; their Axiom AX100 was reviewed in SOS May 1998.

The G50 was always designed to work with basses as well as guitar (there's a bass/guitar switch at the back of the case), so it's no surprise that Yamaha are now producing a pickup specifically for the job. What is a surprise is that the B1D is equipped with six magnet elements (just like the G1D), so it can be used on basses with four, five or six strings.

Physically, the B1D looks identical to the G1D: the pickup itself is attached by a captive cable to a control box. This features a bass input socket (the signal is sent to the G50, whence it can be routed to an amp or elsewhere), a pair of programmable buttons (used for patch selection, data entry or octave shifting), a three‑way selector switch (for choosing bass or synth outputs or a mix of both), and the socket for the multi‑way G50 connection cable.

Yamaha generously loaned a 5‑string bass for the purposes of this test, but the first thing I discovered was that there was no obvious way to attach the B1D control box to the front of the bass. Yamaha have provided plenty of options for mounting the pickup and control box, from suckers and double‑sided tape for temporary use, which leave your guitar unmarked, to velcro and drilled holes for more permanent fixing. I wanted to go for the temporary option, although had I gone for a permanent option, I'm sure I could have got the control box on the front of the instrument (with a slight overhang). Several B1D‑toting basses I've seen are so equipped. However, I took a lead from Yamaha's G50 demo video: noted bassist Victor Wootten had his control box stuck to the back of his bass. I tried this, and it was perfectly easy to find a space that didn't get in the way of my playing.

If you decide that you must permanently fix the hardware, and are a little unsure about doing it yourself, find a guitar tech and pay him or her to do it for you. You won't be sorry.

Once the pickup was mounted, I simply attached the multi‑way cable to the G50 (which was patched into my MIDI system), and started playing. I'm pleased to say that it worked first time, and tweaking string sensitivity helped make it work even better. As with earlier systems, playing should be as accurate as possible to avoid misfiring, but this is made easier by the excellent tracking performance. A delay is present, more so on the E and B strings, but it's barely noticeable once you've adapted to playing with the system. It's even good enough to reliably input notes into a MIDI sequencer, although the G50 generates a lot of MIDI data while tracking playing, and this shows up in a sequence. The G50 also features a monophonic input for pitch‑to‑MIDI conversion independent of the pickup system; I tried this with a bass, and while it worked consistently, the tracking delays served as a reminder of how things were before this new technology. The B1D/G50 combination is a huge improvement!

The B1D makes it possible for bass players to take full advantage of the G50's comprehensive feature set. Different MIDI channels, and patches, can be assigned to each string, playing position on a string can be used to change MIDI parameters (filter cutoff, for example), crossfade between two patches, and much more. Attached MIDI synths respond to a full range of velocity and pitch‑bend (though the latter can be a little flaky) and, of course, you can play chords. In fact, it's possible to use a footswitch to hold a part on one channel while continuing to play with another sound on another channel. The G50 comes set up to interface with Yamaha's XG family of synths — the MU80 and MU100R, for example — and will automatically fill the attached synth with suitable sounds and sensitivity settings. If you don't own one of these, you'll have to set things up yourself, which might be fiddly. It's also worth noting that the B1D pick‑up will also work directly with the Axion AX100 mentioned in the introduction, so you actually have a (small) choice of interfaces.

Bass players have few options in the MIDI world, so it's gratifying that the B1D/G50 system works as well as it does.