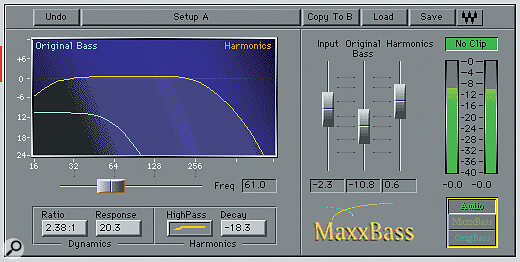 Paul White takes it to the max with Waves' latest plug‑in.

While plug‑ins used to be the preserve of high‑end Digidesign system owners, many are now available in versions that can be used from within MIDI + Audio sequencers. One such is the brand new MaxxBass, the latest in a long line of plug‑ins from Waves. MaxxBass is designed to enhance the subjective level of bass in the material being processed, without adding any additional low‑frequency energy. It's available for version 2.80 or above Nubus SDII (Sound Designer II) systems, Digidesign Pro Tools TDM systems, or in a native version for use with the computer's own processor hardware and a MIDI + Audio sequencer such as Steinberg's Cubase VST. For the purposes of this review I used Sound Designer II, an editing and mastering package able to exploit processes such as this to the full.

How Does It Work?

MaxxBass works by analysing the existing bass end of a signal, then creating harmonics around an octave higher than the original, which you then add into the mix using a slider. It's almost like a traditional HF enhancer, but tailored to the low end of the spectrum. The user can set the frequency below which MaxxBass analyses the bass harmonic structure, and it's also possible to attenuate the existing bass below this frequency if required. But why might you want to do this?

Take the example of music being mixed for playback over compact loudspeakers that cut off around 80Hz. If you feed them frequencies below 80Hz, the cones will thrash about, but you won't get much more useful bass. However, if you deliberately reduce the level of sub‑80Hz signal being fed to the speakers and at the same time add in some of the artificially generated low‑frequency harmonics, you can actually increase the impression of bass, even though the speaker cones are moving less. What's more, MaxxBass lets you compress the added harmonics, to create a more dense bass end.

If you're working with a mix destined for full‑range speakers, you can leave the original bass intact, or possibly drop it back by only a few dBs, then add the harmonics to make it more punchy. Obviously, if you were using full‑range speakers, you'd set the bass frequency limit to something like 50Hz, rather than the 80‑100Hz appropriate for small speakers.

A button bearing a low‑pass filter icon allows you to select different low‑frequency rolloff slopes for the added harmonics, so you can choose to keep these well out of the deep bass region or allow them to overlap the existing bass by quite a large margin. It's also possible to adjust the amount by which the new harmonics extend upwards into the mid‑range. This may sound complicated to you, but the graphical interface makes setting up very intuitive.

MaxxBass provides a frequency/amplitude graph showing the existing bass relative to the cutoff frequency you set; a second curve shows the added harmonics. A reference line shows the original bass level, so you could, for example, drop the original bass by three or four dBs, then bring in the harmonics until the subjective sound is right. Solo buttons at the bottom right of the MaxxBass window allow you to listen to the whole signal, the original bass only, or the added harmonics only. The input level, original bass level and bass harmonics level can all be independently adjusted by sliders, and the usual plug‑in buttons are arrayed at the top of the screen. As with all plug‑ins, these may vary depending on what platform you're working on, but in the SDII version you can preview the effect while setting up (by cycling around a short chunk of audio held in RAM), play an existing sound file back through the process without changing it, or process the sound file to destructively edit it. A stereo bargraph meter shows if clipping is occurring.

Obviously, MaxxBass offers a process that many of us would find useful — providing it works. Perhaps the hardest job is to recommend how MaxxBass might best be used on general mixes, because you never really know what kind of speakers the end‑user has. If you mix specifically for compact speakers and filter out a lot of the existing bass, you'll end up with a mix that sounds more punchy on small speakers, but somewhat 'tubby' and lacking in deep bass if played back on big speakers. It's therefore probably best, assuming that most people have speakers that extend to around 60Hz, to drop the existing bass by 3dB or so, then add just enough harmonics to restore the subjective level of bass you had to begin with. This should give you a mix that works reasonably well on all speakers.

On the other hand, if you're mixing material that you know will be used on small speakers — for example, multimedia sound for CD‑ROM, or material for a specific venue — you can tailor the sound more carefully to the probable type of playback system. To do this properly, you need to mix using the restricted‑range speakers the end user will be listening through, so that you know exactly how solid the bass will sound after processing. During my tests I optimised some material for JBL Control 1s and found that it sounded a lot more punchy than before processing, but the same material played back on my main studio monitors tended to sound boxy, with not enough genuine deep bass. Though the added harmonics do create the illusion of bass, they don't duplicate the physical sensation of deep bass.

Compressing the added harmonics brings the subjective bass level up further, and could be useful for some dance mixes. If you chose the setting which allows the added harmonics to spill back down into the natural bass area, it should be possible to get depth as well as punch. Ultimately, though, the real benefit of MaxxBass is that it enables you to create mixes that will sound louder and punchier than their unprocessed counterparts, on any given speaker system.

MaxxBass isn't magic, and you do have to give some thought as to what settings are best for a specific application, but used properly it can make the bass end of a mix sound a lot more powerful. It seems most useful in processing material for playback over small speakers with restricted frequency ranges, but used with care it can also add extra weight to mixes of dance tunes, say, that will be heard over full‑range systems. Over‑use or inappropriate settings can result in a mix that sounds boxy or tubby when played over a full‑range system, but it really doesn't take long to get used to the controls, and providing you can check the mix on the same type of speakers you intend the playback to be heard on, you shouldn't have too much trouble.

In MaxxBass, Waves have come up with a product that offers something a little different, and one that will be of particular interest to people working on music for games, multimedia or installed systems based on small speakers.

A clever plug‑in that will be most useful to people producing specialist material for reproduction over limited‑bandwidth loudspeaker systems.