An effect invented by Abbey Road engineers has become a studio staple. Waves have painstakingly recreated its original implementation.

The first time I heard automatic double-tracking and tape phasing on a record, I was in college studying electronics, and was intrigued to find out how this effect was being created. I soon discovered that it involved running two signals off tape and then varying the delay time so as to give the impression of two performances being layered; if the delay time was allowed to pass through zero, a psychedelic effect that we then knew as tape phasing occurred. It transpired that an ingenious two-tape-machine setup had been dreamed up by Abbey Road engineer Ken Townsend to help automate some of the time-consuming vocal double-tracking they were doing on a Beatles recording project. The effect is very pronounced on the Beatles' more psychedelic tracks such as 'Tomorrow Never Knows' and 'Lucy In The Sky With Diamonds', while the Small Faces' 'Itchycoo Park' features a classic example of intense tape phasing on the drum fills. Jimi Hendrix was also fond of the effect.

Ken Townsend's setup involved connecting a primary tape machine to a second machine equipped with varispeed in such a way that two versions of the same audio source could be played back more or less simultaneously. When mixing a song that required ADT or Artificial Double Tracking, the track to be treated would be sourced from the recording head of the multitrack tape machine, which meant it played back before the signal reached the replay head. This was fed to a second tape machine set in record mode, so now the signal feeding the mixer from the replay head of the multitrack and also from the second machine's replay head, which was also routed back into the mixer, were pretty much coincident. By continually making slight adjustments to the speed of the second machine, its output could be moved around in time and pitch relative to the first machine, creating the illusion of a separate take. The effect sounded different in mono or stereo, as in mono, various phase-related comb-filtering effects could be heard as the speed was varied. These comb-filtering effects became the basis of phasing and flanging.

Abbey Road's engineers coined the terms 'phasing' and 'flanging' to mean different things. In essence, flanging is the 'through zero' effect heard when both signals are of the same polarity, and phasing is the same thing but with one of the signal's polarity inverted. The resulting comb filtering stresses different frequencies in both cases, with the second option giving a much deeper null as the delay time passes through zero. 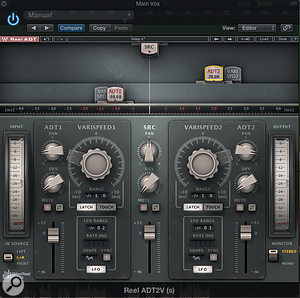 The two-voice option gives you two independent delayed signals, for a more complex sound.John Lennon reputedly called the ADT rig 'Ken's Flanger'‚ thus establishing the term 'flanging' to describe the whooshing effect heard when the delay time passes through zero. So tightly was the recording process regulated by the studio bosses back then that Ken says he was called to the General Manager's office and told not to use ADT again until it had been approved by the technical department — but of course he ignored the order. Interestingly, the use of dual tape machines to create phasing and flanging effects had, unknown to Ken, been tried in other studios — clearly an example of morphic resonance!

Waves' Reel ADT is, like all their plug-ins, available for all the common Mac and PC formats, and was developed in association with Abbey Road Studios to ensure authenticity. It emulates the original process in some detail, recreating the wow and flutter and sonic coloration of the two valve tape machines used in the original setup, along with varispeed and a few other controls necessary to create and adjust ADT, phasing and flanging effects. These features include the ability to overdrive either tape machine in the same way as the originals, but there are control options that allow you to do tricks that weren't possible with the original too. Reel ADT can be used in mono, mono-to-stereo or stereo-in, stereo-out formats. Additionally there's a two-voice option that can be used in stereo or mono, adding a second speed-modulated signal that can be modulated independently of the first.

The plug-in provides a useful graphic representation of the ADT delay by showing the Source and ADT tape heads at the top of the screen: a ghost varispeed ADT version of the head moves as the delay time is adjusted or modulated. When the two-voice version of the plug-in is selected, you get two ADT sections and an extra ADT head shown in the display. The varispeed range and the placement of the ADT head setting determines whether the modulated signal plays before or after the source. For vocal doubling, the ADT is usually delayed by around 10 to 20 milliseconds, whereas phasing and flanging have the delay modulated such that the ADT signal continually moves from being behind the source signal to being in front and vice versa. In this plug-in, the offset between the two heads can vary up to ±20ms with the varispeed sweep range having the same range. The varispeed is key to controlling the effect, and may be set manually via the large central knob (and automated) or driven from a choice of waveforms — sine, triangular, reverse sine, reverse triangular, or random. Random sounds the most realistic to my ears, though rhythmic phasing effects can be set up by using the other waveforms.

The varispeed control — which is really a plus/minus timing offset control rather than true varispeed, and much easier to manage because of it — can also be assigned to MIDI in those DAWs that permit the sending of MIDI to processing plug-ins. Manual operation and LFO modulation may be used at the same time. A Latch mode is available to force the varispeed control to stay on the value it was when released, while Touch mode forces the varispeed control back to zero when released. The LFO may also be sync'ed to the host DAW's tempo.

Source drive controls, mute buttons and polarity-invert buttons are available for both inputs, and the source and ADT components may also be panned individually and adjusted in level, though most of the classic effects require the original and processed signals to be of similar levels.

Reelin' In The Years

As a vocal or instrument doubler, Reel ADT is capable of excellent results which are further enhanced by selecting the dual-voice version. Set up so that the delay time wanders gently about in the 10 to 15 ms area using the random waveform, and a range of three or four milliseconds with different delay times (or positive and negative delay times) on the two channels sounds extremely authentic. There's also the option of copying the audio track in your DAW (or using an aux to feed Reel ADT), applying Reel ADT on the copy and then using the stereo, double-voice mode with the source signal muted. This allows the stereo double-track and the dry original to be processed in different ways. Turning up the tape drive adds a nice tape-like fatness to the sound until you go too far, at which point things get more distorted.

When it comes to phasing and flanging, the sound is more Beatles-era psychedelia than Itchycoo excess and I can't help but wonder whether some of the other studios experimenting with similar techniques tried to feed some of the ADT'd signal back into the input as typical flanger pedals do. That may well give greater emphasis to the comb filtering in a Hendrix 'Gypsy Eyes' kind of way. If your DAW has routing options that allow such experimentation, that would certainly be worth trying.

What Ken's original setup couldn't do is offer tempo-locked modulation, and by arranging the two-voice version so that the delay modulation is in opposite polarities for the two channels, it is possible to process drum grooves and loops with a rhythmic phasing effect that might appeal to both dance and ambient music composers. In fact there's a lot more to explore in this area than is immediately obvious.

Waves have to be commended for deciding to recreate the original tape ADT/phase/flange effects in such a faithful way, and in Reel ADT, they've not only captured the spirit of the original but also added enhancements that allow the effect to be applied to more contemporary musical styles. If you always wanted to get that John Lennon trippy vocal sound, Reel ADT is about the best way to get it, but it works just as well on modern vocals.

Waves have developed a convincing recreation of a classic '60s effect, which is still relevant to today's studios.