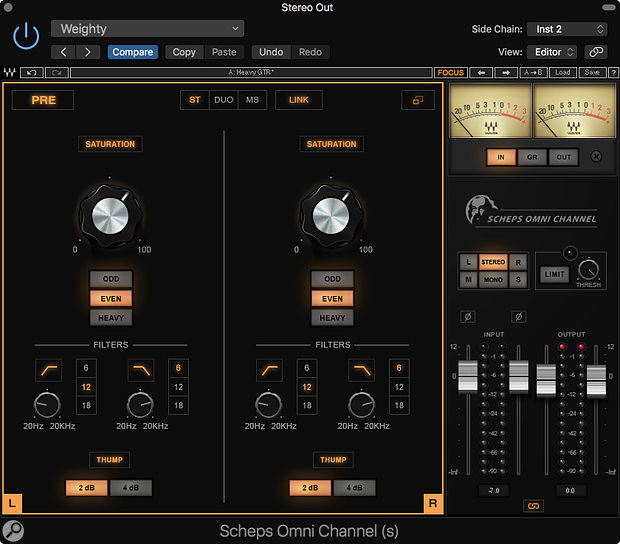 When not winning awards for his impressive portfolio of recordings, Andrew Scheps can often be seen demonstrating his skills on the Waves booth at music trade shows, so he’s clearly a fan of their plug-ins. Andrew has worked in a range of musical styles with Adele at one extreme and Metallica at the other, and his new signature plug-in brings together his favourite mixing tools in a single channel strip. The Scheps Omni Channel plug-in comes in both mono and stereo versions, and features five modules that you can use in any order. Further options, such as different compressor types, are also available within the strip. 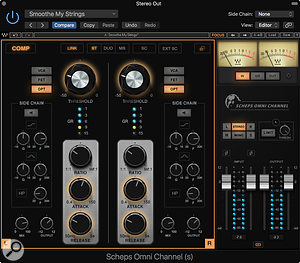 Three styles of compression are available, modelled on optical, VCA and FET circuits.The default signal chain kicks off with a ‘Pre’ module that emulates the character of hardware console preamps, offering three styles of analogue-type saturation — odd-harmonic, even-harmonic and ‘heavy’ — plus tunable high- and low-pass filters and a resonance control to emphasise low-end Thump. As this module can be used to add controlled distortion, it may be useful to deploy it further along the processing chain rather than at the start, and this possibility is catered for; in fact, everything is designed to offer as much flexibility as possible. Rearranging the order of the modules is simply a matter of clicking and dragging on the left/right arrows above a module’s title.

There are also three choices of compressor: VCA, FET and Optical. All three share the same control set, so that you can switch between them and compare the results very quickly, and parallel compression is catered for with a wet/dry mix control. The VCA algorithm provides fast, relatively clean compression, while FET is slightly slower and adds a little coloration. Opto, like the hardware it’s modelled after, operates more slowly, allowing transients to pass through cleanly and imparting a general character that is altogether smoother. 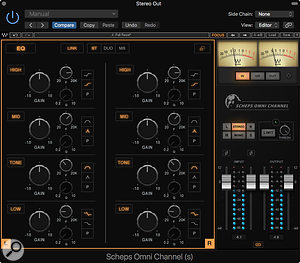 The EQ section is conventional but well specified. Compressors in a channel strip behave differently depending on whether they are placed before or after the main EQ, so the ability to shuffle the order of the channel modules is particularly welcome here. The equaliser section is a four-band console-type affair that can be flipped to fully parametric operation if greater control is needed. High and low shelving bands address the extremes, with a choice of two fixed-Q settings. The two peaking EQ sections are described as Mid and Tone, and each can be dialled into any frequency from 20Hz to 20kHz. Both have slightly different characters; Tone could be described as being more ‘gluey’ than Mid.

The Fix Is In

For taming sibilance and other frequency-specific problems, there’s the DS2 module, which comprises two identical dynamic processing sections controlled from a filtered side-chain. The filters have adjustable bandwidth and shape so can be tuned anywhere in the audio frequency spectrum, and the side-chain signal can be internally or externally sourced. It works much like a conventional de-esser, but is far more flexible as it can also be tuned to address low-frequency popping, mid-range harshness, and so on.

The Gate module is a conventional ‘clean up’ gate/expander with the usual controls for threshold, attack and release. There’s no Drawmer-style Hold control, but Range and Close parameters set the maximum amount of noise reduction that can take place, for situations where complete silence is inappropriate, such as when you need to reduce drum kit spill without killing it altogether. Its side-chain source can be internal or external and may also be filtered to allow a specific frequency range to trigger the gate. A Mid/Sides mode further extends the capability of the gate by, for example, allowing sounds in the centre of the mix to be gated and those panned left and right to be left intact.

A Master module is included, with input and output level fader, twin VU meters to show input level, gain reduction and output level, and a selector for the output and monitoring formats. There’s also a brickwall limiter.

Each module also has an expanded view option, enabled by clicking the window icon in the top right corner of the module. These open up more controls than you can reach from the overall channel strip view, and also allow separate access to the Left and Right or Mid and Sides controls as appropriate. In the expanded view, you’ll see that each of the dynamics modules has an external side-chain option, though there is only one one side-chain input signal, so this is common to all modules. The side-chain input has its own equaliser and an audition button.

In the real hardware world, you only need a couple of patch cables to add another piece of outboard gear to the signal chain. Waves have provided similar flexibility in the virtual world by adding an insert slot that can be positioned anywhere in the chain. This can host an extra one of any of Omni Channel’s modules, or other Waves plug-ins.

For live use, Scheps Omni Channel can run with zero latency, and key controls are mapped to Waves’ eMotion LV1 live mixing console, allowing the Omni Channel to operate as the console’s channel strip.

Sonically the Scheps Omni Channel doesn’t disappoint, delivering the kind of smooth and controllable sound you’d expect from a real-life channel strip. I particularly liked the Warmth and Thump features built into the preamp. Sensible use of the saturation options helps make a mix sound bigger, more cohesive and more energised, with the 2dB and 4dB Thump options adding punch to the lows in a very useful way, lending significant beef to kick drums and so on. The EQ offers nothing out of the ordinary, which means its operation feels very familiar, but it sounds classy, smooth and very musical. It offers more range than most people are likely to need but there’s no harm in that. 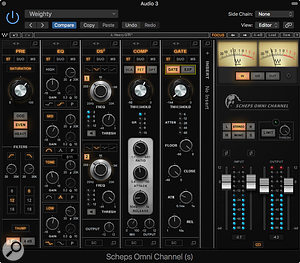 The three compressor options sound quite different from one another, and capture the core vibe of what they are trying to emulate very effectively, with Opto having the most mellifluous sound of the three and FET the most aggressive. All three allow you to pile on quite a lot of gain reduction without wrecking the sound, and that mix control is perfect for big parallel compression sounds.

That leaves the two ‘fixit’ sections: the DS2 modules and the gate. Both put in workmanlike performances with no obvious vices, though as with all de-essers, you have to take care not to push too hard in case you introduce audible side-effects. In some cases a static EQ notch at the most offensive frequency teamed with some de-essing does a better job; that’s where an EQ display with a spectrum analyser overlay might have helped, but that’s a specialist application and many people probably already have an EQ plug-in that can do that.

The many presets provide a good flavour of what Omni Channel is all about. Most, if not all, seem aimed at specific instruments, so clearly that’s the main focus of the plug-in, but given its musicality and M/S capabilities, I found that it could also sound very sweet when processing entire mixes. In all, then, the Scheps Omni Channel provides a very polished-sounding audio toolkit in channel-strip form, with enough versatility to take on just about any job. Given its introductory pricing it is a serious bargain.

In case a panel full of controls looks a trifle daunting, Waves have included a set of what they term ‘Focus’ presets that highlight the most important controls for a given application. Pick a preset, click Focus and you’ll see a coloured halo around the most relevant controls.

There’s a very wide range of artist presets from contributing engineers and producers, though it always needs to be born in mind that preset creators have no idea how dynamic your recording is, so their threshold settings may be completely inappropriate to your tracks. All the usual Waves preset-management functions are present, including the ability to make A/B comparisons between two different plug-in settings.

Scheps Omni Channel contains all the tools you need to handle EQ, dynamics, coloration processing and corrective tasks such as de-essing.