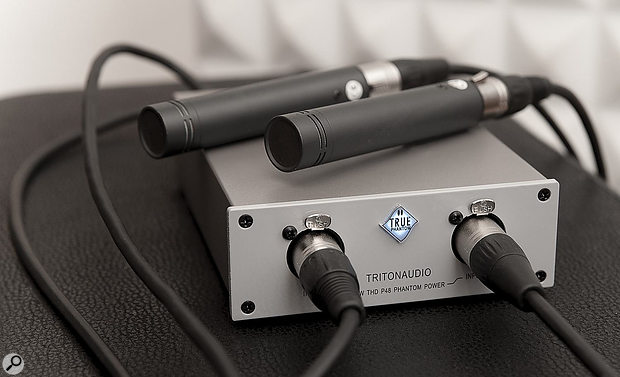 Dutch company Triton Audio are probably best known for their FetHead low-noise mic boosters, but they make a variety of other useful gadgets and the ‘True Phantom’ power unit, reviewed here, is (as far as I’m aware) unique. Externally, it appears to be a typical two-channel phantom power supply box but inside it involves a far more sophisticated and elegant engineering approach than the standard IEC-specified phantom supply arrangement. The company claim the relatively high cost associated with this extra complexity is worthwhile because the clever arrangement potentially reduces distortion, increases headroom and output levels, and lowers the noise floor of many phantom-powered mics.

On the rear panel of the True Phantom’s small (128 x 54 x 165 mm, about 1.2kg) grey box are an On/Off switch, a C6 (‘clover leaf’ or ‘mickey mouse’) mains inlet, and a supply voltage selector (115 or 230 Volts AC). Two male XLRs provide output signals from the attached microphones, and a pair of recessed buttons bypass the output DC-blocking capacitors (used to prevent phantom from being sent to the mic preamp), and separate the audio ground from the mains safety earth. Mics requiring phantom power are plugged into the two female XLRs on the front panel, and a True Phantom badge illuminates when the unit is powered up and providing 48V phantom power.

As shipped, the audio and mains safety grounds are connected and the DC-blocking capacitors are in the signal path, but many users would probably reconfigure both settings, since most preamps are already grounded and incorporate their own DC-blocking input capacitors anyway; for most people this would be a case of set-and-forget.

Other than this, there’s no user configuration to worry about. Mics are plugged in, outputs are connected to the recorder or preamp, the box is switched on, and that’s it. The mics receive the required phantom power, the preamp receives the anticipated audio signals, and everything works exactly as expected.

The obvious question is whether the internal complexity and expense of the Triton True Phantom box results in a tangible, practical benefit? There is no doubt as to the theoretical validity of the underpinning physics and engineering, and Triton's web site carries many impressive graphs validating the claimed benefits. But close examination reveals that the real-world benefits are, in reality, vanishingly small — and that the potential benefits will inevitably also vary according to the precise nature of the internal circuitry of different mics.

Nevertheless, an independent investigation by Audio Precision (presented at the New York AES Convention in 2018) indicated that a reduction in distortion of 10dB for signals under 50mV was acheivable, and of 4dB for larger signals. Or, put another way, when powered from standard phantom a 'typical' microphone might produce a THD figure in the region of 0.00095% (-100.4dB), and that could be reduced to 0.0006% (-104.4dB) or more when powered from the Triton True Phantom supply. This is obviously a good thing, although if you can hear a reduction in the amount of distortion of three one-thousandths of a percent, you have far better ears than me!

The other claimed benefits are again small ones, and include a rise in the mic’s output level (by around 0.06dB), an improvement in LF extension from 12 to 10 Hz (at the -3dB point), and a fractionally lower noise floor. While this is all clearly very good from a technical purist point of view, I'm afraid I was unconvinced that the marginally reduced THD or increased output level of a 'typical' mic could change my perception of a recording — and my subjective listening tests did nothing to alter that view. I just couldn’t hear any difference switching between a standard phantom power supply (from a GML 8304 mic preamp) and the Triton True Phantom unit, when using Sennheiser MKH20, 30 or 40 microphones, nor with a Neumann SM69FET stereo mic. I did, though, convince myself I could just detect a subtle difference in character when using some vintage Neumann KM84s, and also with a Blue Baby Bottle microphone — but the difference was so subtle that it was far outweighed by a change in mic position, let alone a change in the choice of mic itself.

So we really are talking of very, very small technical improvements here, which in my view are well into the realms of diminishing returns, and are of a kind which is likely to be detectable and appreciated only by the most critically exacting of purists working with the most aurally demanding sources in perfect recording and monitoring conditions; the engineering sophistication and elegance involved here is unnecessary in 99.5 percent of real-world recording situations.

Nevertheless, this isn’t a case of snake-oil selling: there can be no doubt that this is a very well-engineered product and the marketing claims are completely legitimate. And any reduction in systemic distortion, no matter how small, is a welcome advance in the science of recording — in an ideal world all phantom supplies really should be built this way. But for the vast majority the cost/benefit ratio will be very hard to justify, so I suspect the potential market for Triton’s clever little box — in its current form, at least — will be rather limited. However, the designer of the true Phantom, Joost Kist, has applied for a patent and has advanced plans in place for a miniaturised ‘chip’ version of the circuitry to permit easy and low-cost integration of the system in other manufacturers' products. It will be interesting to see which manufacturers, if any, choose to adopt Triton’s system in the future.

To understand Triton’s claims for the True Phantom powering system, it’s necessary first to understand the inherent electronic limitations of the standard approach to phantom power, as defined in the DIN EN61938 specification. The diagram below shows how a nominally 48V DC voltage (the specification actually allows a tolerance of ±4V) is fed equally onto both sides of the balanced microphone’s audio connections through very closely matched 6.8kΩ resistors (the specification calls for better than 0.4 percent tolerance or ±27Ω). The power supply’s return current passes along the cable’s (grounded) shield connection. 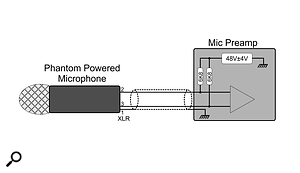 The two 6.8kΩ resistors are there primarily to limit the maximum current that can flow in the event of a connection fault (to 14mA), but it is critically important that they are very closely matched in value. This is to ensure that the phantom power voltage on the two balanced audio connections appear as a ‘common mode’ signal — meaning exactly the same voltage exists on both signal wires. If the microphone doesn’t need phantom power, it won’t provide an internal circuit path between the signal wires and the grounded shield connection, so no phantom current can flow. Moreover, although both signal wires are sitting at 48V, there is no voltage different between them, which means the audio output from the mic capsule (which is a differential signal) won’t be affected either. In simplistic terms, a dynamic mic just won’t ‘see’ the phantom power, even though it is present on the cable — hence the system’s ghostly ‘phantom’ moniker. However, the invisibility of phantom power is ruined if the source resistors are poorly matched, since unwanted noise and interference can then be detected and amplified by the mic preamp.

Although incredibly simple and cheap to implement, an obvious drawback of the standard phantom power system is that the voltage available at the microphone is entirely dependent on the current drawn by the microphone’s circuitry, as explained by Ohm’s Law: V=IR. Since the supply’s source impedance is fixed (thanks to those 6.8kΩ resistors), more current flowing down the cable results in a larger voltage being developed across those resistors, and thus less voltage is available to the microphone for its internal impedance converter and output driver electronics. Some capacitor mics also use the phantom voltage directly to bias the capsule, and so a lower voltage at the microphone can result in reduced headroom and increased distortion.

Although the standard phantom supply specification requires the ability to deliver at least 10mA to the microphone (but no more than 14mA under a full short-circuit fault), most early FET microphones required less than 2mA. Ohm’s law tells us that such a mic would still see more than 35V at its end of the XLR cable, which is enough in most applications. However, multi-pattern mics with more sophisticated electronics, and mics with transformerless outputs, often have greater current requirements. The vast majority need 5mA or less, but there are a surprising number of current models that devour more than 7mA, and some really do require the full 10mA.

Of course, the reduced voltage at the mic is an obvious and predictable side-effect of the standard phantom arrangement, and many mics overcome such limitations by employing an internal DC-DC converter to boost the voltage available inside the microphone for biasing the capsule and to power the impedance converter.

Although rare these days, another potential problem associated with the phantom power supply is that the higher the current drawn the greater the demand on the preamp or mixer’s phantom power supply. Sadly, not all phantom supplies are born equal, and it’s not unknown for the phantom voltage to ‘sag’ or become noisy when lots of ‘thirsty’ mics are connected to a poorly designed mixer or multi-channel preamp!

Perhaps a more relevant issue is that the 6.8kΩ phantom supply resistors are effectively connected in parallel with the preamp’s own input stage, and thus act as an additional load on the microphone’s output. If the preamp’s real input impedance is 1.5kΩ, say, the extra load from the phantom supply reduces the impedance seen from the mic by 20 percent, to about 1.2kΩ. But with the trend towards higher input impedances (many of Neve’s designs are nominally 5kΩ or higher, for example) the loading effect is far stronger, reducing the apparent input impedance by nearly 50 percent, to around 2.8kΩ. The effect of that greater loading can potentially result in increased distortion from the microphone’s output driver or transformer, as well as a reduced signal level.

Triton Audio’s solution to all these issues employs a well-known technique in electronics which replaces each of those simple passive current-limiting resistors with some active circuitry known as a ‘current source’. This is designed to maintain a constant amount of (DC) current through to the microphone’s electronics while also providing a very high-impedance to audio (AC) signals. The latter aspect ensures that the microphone effectively only ‘sees’ the preamp’s true input impedance and doesn’t have to drive audio signals through the phantom supply as well. As Triton have demonstrated, the benefit of this elegant approach is potentially reduced distortion and an increased signal level as the mic’s output stage doesn’t have to work so hard.